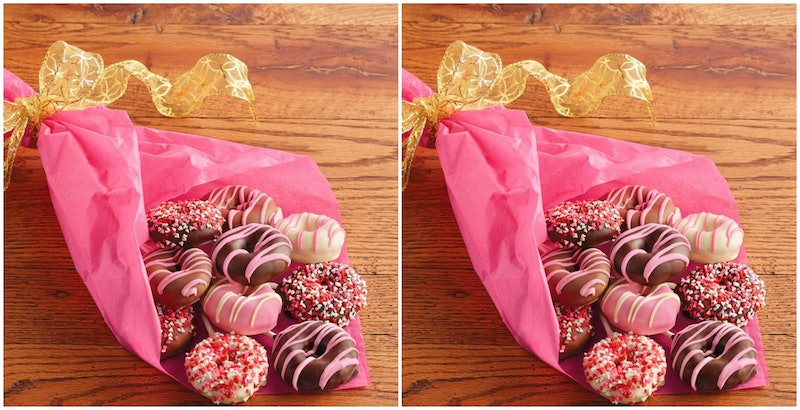 I do appreciate a nice bouquet of flowers, but I’ll admit that I struggle with, uh, keeping them alive. You know what I absolutely do not have trouble with, though? Doughnuts. And clearly I am not the only one in this proverbial boat, because Harry & David made a doughnut bouquet for Valentine’s Day this year. It’s like they knew we were coming, fellow plant-killing baked good enthusiasts!

Fun fact: Harry & David is over a century old. The company was originally founded by Samuel Rosenberg in 1910 as Bear Creek Orchards; then simply a pear orchard in Southern Oregon named for the creek that ran behind it, the operation grew after Rosenberg’s sons, the titular Harry and David Holmes, took it over in 1914. The mail-order sales for which the company became known began in 1934, with the official name change to Harry & David occurring in 1946. Since 2014, Harry & David has been owned by floral and gift behemoth 1-800-Flowers.

Besides their Royal Riviera pears, Harry & David is perhaps most widely known for their tower-style gift sets; generally featuring anywhere between two and six boxes, the towers arrive packed full of sweets and eats ranging from baked goods and chocolates to cheeses and crackers. But the towers are far from the only things Harry & David purveys — and the doughnut bouquet is by far one of the most notable highlights of the company’s 2019 Valentine’s Day offerings.

And as a bonus, express two-day shipping is included — all you’ll have to pay is standard shipping and processing charges. If you want to make sure your bouquet will arrive by Valentine’s Day, you’ll need to place your order by Tuesday, Feb. 12. It’s also worth noting that any order placed after 10 p.m. PT/1 a.m. ET on Wednesdays won’t ship until the following Monday so as to avoid weekend transit. Just, y’know, FYI. For more useful shipping info, head here.

Bestowing floral bouquets upon your one true love on Valentine’s Day has been a staple of the holiday since the Victorian era, but in 2019, it look like flowers are out and… uh… other things are in, many of which are edible: So far this year, we’ve seen the arrival of Reese’s bouquets, beef jerky bouquets, and even gin bouquets. The season is just getting started, too. What’s next? Pie bouquets? Mini wine bottle bouquets? Chicken nugget bouquets?

I don’t know about you, but I am definitely here for all of those possibilities. Because, I mean, flowers and pretty and all, but I would rather have some delicious to jam in my face instead. Just sayin’.