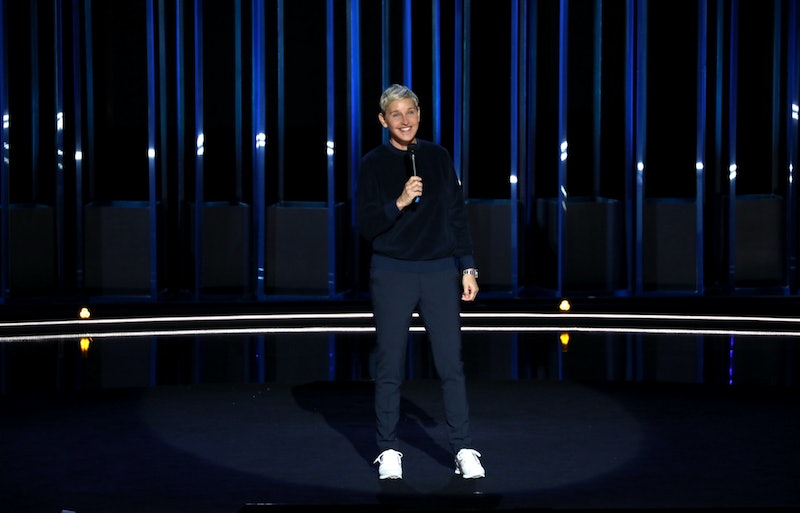 Ellen DeGeneres' long and storied legacy is undeniable. Her name has become synonymous with love, kindness, and hilarity, and as The Ellen DeGeneres Show remains a hit more than a dozen years after its premiere, she's proven she knows what makes a successful program. But before she established herself as a beloved TV host, not everyone believed the world would take to her. In particular, one joke from Ellen DeGeneres' Relatable standup special shows how much she overcame to get where she is now.

Before The Ellen DeGeneres Show was a household staple, DeGeneres was the star of a short-lived ABC sitcom called Ellen. It was cancelled in 1998, just a year after DeGeneres and her character made history by coming out as gay on-air. Per the New York Times, the cancellation was protested by gay rights groups, and came after frequent clashes between DeGeneres and the network; ABC executives reportedly requested that not every episode be on a "gay theme" and that a special viewer's advisory be included about content.

Now, in DeGeneres' new Netflix special, she really drives home the adversity she faced due to intolerance of her sexuality, and the lack of faith many studios had in her when she pursued The Ellen DeGeneres Show years later.

"I lost my sitcom when I came out. It's not like nobody warned me — everybody warned me," DeGeneres tells the audience. "My publicist, my agent, my manager. Anyone making money off of me said 'don’t do it.' But you know, my worst fears came true, and that's why people stay closeted. The same people who loved me, overnight, they hated me, just because they knew I was gay. Everything changed."

She talks about the depression that followed the cancellation, and the articles that picked apart every aspect of her decision to go public with who she was. It took her years to get back on TV, and she was eager to return to screen. "When I was offered this talk show, I was really excited about it, but they were trying to sell the talk show, and a lot of people didn't wanna buy it. No one thought [people] would watch," she continues. "There was this one station manager, and this is a quote: 'No one's gonna watch it. No one's gonna watch a lesbian during the day.' … I said, 'Well they weren't watching me at night. What time of day is good for a lesbian?'"

Even once the show actually made it to air, she says, she still wasn't really allowed to be her authentic self. “I kinda had to tone it down a little. I had to dress differently. You know, my hair was different. I had to wear necklaces. Crazy things, really," she quips before imitating a viewer's reaction. "'Is Ellen wearing a necklace? It's very delicate! She may not be gay anymore, I don't know! Does she still have the cats? She may not be gay!'"

The audience roars with laughter at her clever delivery and witty recollection of these events, but the point DeGeneres is making is clear. It's easy for many of us, especially those too young to remember the backlash felt after her coming out, to think of DeGeneres as someone who's always been a universally beloved entertainer. If you grew up watching The Ellen DeGeneres Show, seeing its host dole out gifts, surprise tearful families, and dance every day with unbridled joy, the tumultuous road that led her there might not even cross your mind.

In some ways, the fact that DeGeneres' past struggles are so often eclipsed by her current adoration feels like a success. It allows us to feel like society has moved past the idea of shunning someone because of their sexuality or boycotting a show because its star is gay. But as so many in the LGBTQ+ community are well aware, discrimination still persists, and there is plenty of progress yet to be made.

Relatable isn't solely full of self-reflection, though those moments tend to pack the most punch. DeGeneres' trademark observational humor rears its head throughout much of the hour-long special, and there's even some dancing toward the end for fans who have come to expect it. But the judgment she felt as a young gay woman is seemingly still fresh in her mind, and when she reminds the audience of it, they're better for it. Even someone who's now a national treasure wasn't immune to widespread, systemic bigotry just a few short decades ago, and in some cases, still isn't.

But ultimately, she offers a message of hope, leaving her listeners with the same warmth her TV viewers flock to every day. "The years went on, people watched the show, liked the show, saw that I was the same person I was before," DeGeneres says. "It turns out they’ll watch a lesbian during the day."

More like this
Keke Palmer Just Announced She's "Going To Be A Mom" On 'SNL'
By Brad Witter
The 'Kenan & Kel' Reunion On 'SNL' Took A Dramatic Turn, Thanks To Keke Palmer
By Brad Witter
Theo James Revealed The Truth About His 'White Lotus' Nude Scene & Fans Can't Cope
By Stephanie Topacio Long
You’ll Most Definitely Recognise Kyle Pryor’s Soap Star Girlfriend
By Sophie McEvoy
Get Even More From Bustle — Sign Up For The Newsletter