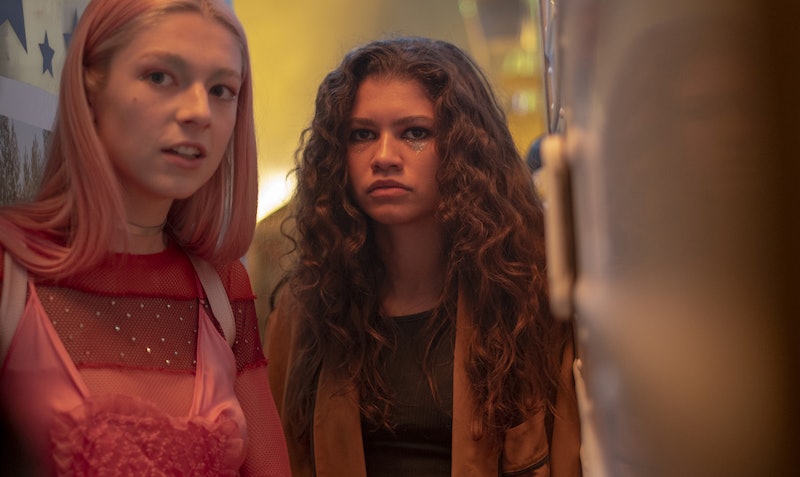 The cast of one of the year’s heaviest shows kept things pretty light on set when the series' cameras were not rolling, and there is a crack vid to prove it. HBO has released a behind-the scenes video from Euphoria that shows how much fun the stars managed to have when they were not busy filming any one of the bajillion intense scenes that made up the series' first season. Now, if you are like, “Hold the phone, hit the pause button, and back the truck up because what the heck is a ‘crack vid’?”, do not worry. Up until, like, five seconds ago, I was right there with you. And if you do know everything there is to know about crack vids, please forgive me for being out of touch. It happens to the best and worst of us.

At the risk of embarrassing myself, I will attempt to share some of what I learned today. According to the Fanlore wiki, a crack vid is a fan-made video that mashes up pieces of TV shows, movies, music, and other pop culture nuggets in weird and entertaining ways. There is a lot of text, the SMPTE color bar TV test pattern pops up in between scenes, and the pacing is quick. As Vingle user shannonl5 explained in an informative post that went up four years ago, crack vids are meant to make fans laugh and bring fans together. This art form has been around for a while, so again, there is a solid chance you know what crack vids and/or have encountered them before. But if the art form is new to you, there are lots of examples on YouTube you can watch. Lots and lots of examples.

And one of those examples just so happens to be the video that brought us here. The Euphoria crack vid kicks things off with a Law & Order-esque intro, but there is lowercase Comic Sans text in place of the uppercase serif font. And then, it switches to a Euphoria-ified Game of Thrones intro. And then, the Curb Your Enthusiasm theme plays as Euphoria actors Zendaya and Jacob Elordi goof around on set. And those are just the first 20 seconds of the three-minute video. You can check it out below.

I do not know what threw me for a loop more, seeing Nate Jacobs be a real silly billy, or the video's final shot. What a trip.

Every now and again, this crack vid almost feels like watching something from a parallel universe where the characters from Euphoria get along all of the time. Could you imagine a Season 2 where Rue, Jules, Nate, Maddy, and the rest of the Euphoria kids just horse around and try to make each other laugh? It's probably safe to assume that will probably never happen in this universe. The humans who play those characters, however, sure do get along, and their bond shines and shimmers throughout this video like the gemstones around Jules's eyes.

More like this
Steve Martin Hints That He May Retire After 'Only Murders In The Building'
By Jake Viswanath
Does 'Locke & Key’s Ending Mean There Could Be A Season 4?
By Sophia Moore
Everything To Know About 'Loot' Season 2
By Kadin Burnett
Here’s The True Story Behind 'A League Of Their Own'
By Morgan Leigh Davies
Get Even More From Bustle — Sign Up For The Newsletter