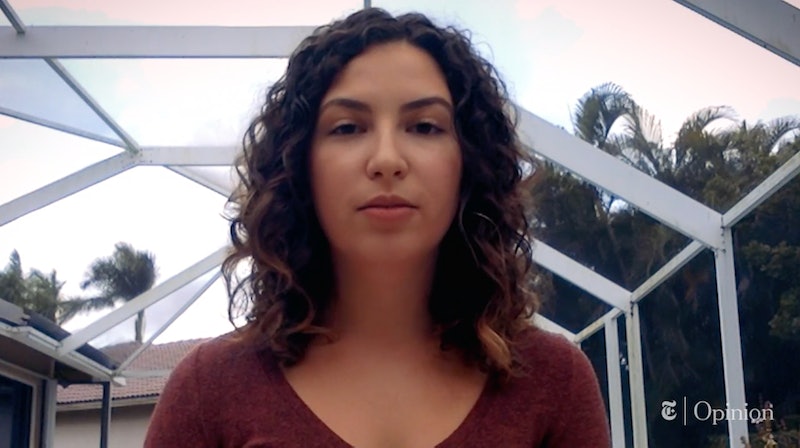 What do you do when you just feel totally and utterly helpless? In Shana Rosenthal's family, you deal with it by writing. That feeling of helplessness, which was very strong in the wake of the mass shooting that killed 17 students and teachers at Marjory Stoneman Douglas High School, pushed the former Parkland student to start the #LetterToYourSenator campaign.

"I thought, What can I do other than helping these kids march? What can I do immediately?" Rosenthal tells Bustle. She says that contacting her lawmaker was the only action she could think to take that would be both immediate and effective. She knew that a phone call wouldn't do the trick, since her experience interning in one of Florida Sen. Marco Rubio's district offices taught her that phone calls went through interns like herself and almost never reached the senator. It seemed that writing a letter was just the ticket, then.

The process of writing the letter, which eventually became an opinion piece in the New York Times, also led Rosenthal to a pretty chilling realization: over the course of her life, she'd been physically present in the surrounding area of no less than four mass shootings as they unfolded.

"I guess when you're in your own mind, you don't realize how powerful you can be. That's just the truth, I didn't even realize I'd been in the vicinity of four shootings until I wrote it down, and that's sad," Rosenthal tells Bustle. "I think the reflection process is ... going to help get people involved in politics, because it's been very discouraging lately."

Although Rosenthal says she hasn't gotten a response from Rubio's office yet, thousands of people have read her letter online at this point. And she's using it as a jumping-off point to get people writing their own letters to their own representatives in Congress. A quick glance at the #LetterToYourSenator hashtag on Twitter reveals that it's getting a lot of play. Tons of people are posting pictures of their own letters, and some have already reached out to Rosenthal telling her that they've used hers as a template. She believes it's a deeper way to communicate about an issue as important as gun violence.

"It's more than just a Facebook post. It's a distinct argument, where you can follow someone's train of thought," she tells Bustle. "You can respect someone for having their point of view and getting it across, and it's also holding our elected official accountable ... It's starting to take off, and I'm really excited about that."

The Parkland shooting seems to have struck a chord not only for the Stoneman Douglas students and alumni who've stepped up to lead an ever-growing movement, but also for people across the country. Rosenthal says she's been in touch with some current students and organizers of other initiatives who she's now collaborating with; she's already agreed to have #LetterToYourSenator be a part of the March For Our Lives event in Miami.

I didn't even realize I'd been in the vicinity of four shootings until I wrote it down, and that's sad."

"It's exciting, in the wake of something so terrible," Rosenthal says. "I rarely, in politics, lately, have been saying that I'm optimistic, and for the first time I do feel optimistic, which is ... refreshing, because these students have nothing to lose except their lives."

She certainly has reasons to be optimistic: the Never Again MSD movement that Parkland students started has already sparked public conversations about gun reform, compelled some Republican lawmakers to say they may be open to certain restrictions on guns, and pressured some companies to drop their partnerships with the NRA.

Now that Rosenthal has laid the groundwork for you, it doesn't take much effort to join the #LetterToYourSenator campaign: all she wants you to do is write a letter to your lawmaker of choice and snap a photo of it to post on Twitter before dropping it in the mail. The point of the campaign is simply to inspire more people to get involved in ending gun violence, as well as to compel lawmakers to actually listen to their constituents. Rosenthal believes that's a small way to start making a difference — but you don't have to stop there.

"People think that these huge ideas, like Black Lives Matter, are planned out super far in advance," Rosenthal tells Bustle, her comments directed specifically at those people who might have an idea around which they want to start a similarly ambitious campaign. "It seems daunting ... to have an idea like this. But it's really just a step by step process, things snowball, and you go with. Just go for it."