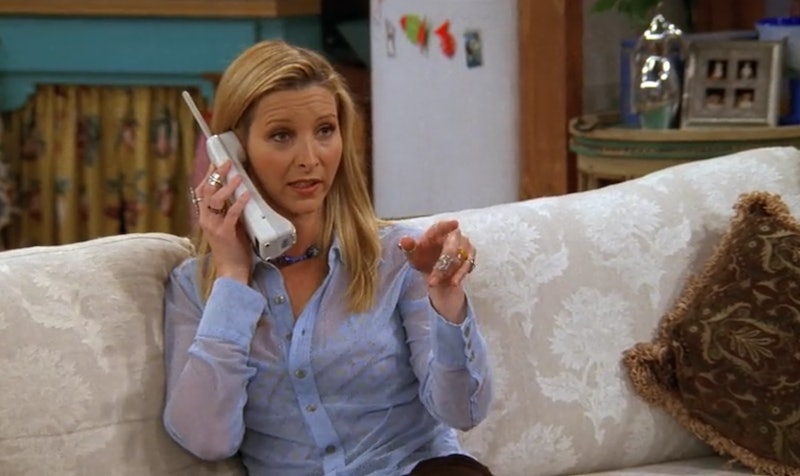 You know when you are studying and you have an essay that needs doing? You read and read again, desperately trying to analyse the text for something new, underlining things with a red biro. You know, all the important stuff. However, that is hard. And all that useful information is very dull. So, many people opt to watch their favourite shows over and over again and give it the same level of analysis instead, and I'm so here for it. Die-hard Friends fans have just noticed another error that hasn't been flagged before, and, y'all, it's a pretty niche.

All hail marathon-ing old TV shows that you've watched a hundred times! It's so much more fun than, I dunno, trying to sort your life out or whatever poppycock kind of crud that needs to be done. So, this time round, the episode in question is The One With The Screamer. In this episode, for those who can't remember, our gal Phoebe is refusing to hang up on the phone to a company who have put her on hold. Which I can totally related to, having been on hold with my phone company for what felt like an eternity just a few days ago.

So, like I said before, Friends fans are super eagle eyed, and the people of Reddit noticed a pretty serious issue, as Digital Spy reports. Y'all, the phone isn't effing plugged in. This is not a drill. The dock for the phone isn't plugged into anything, and there's a bunch of holes in it where cords are clearly supposed to go. LOL.

And, guys, this isn't the only error that viewers have noticed in retrospect. Many things, including continuity and all sorts, are coming to light now. On one occasion, as the Birmingham Mail reports, a stand-in person for Monica has her face clearly in shot. Which is a huge issue because, like, it's very clearly not Monica.

The show, which ended 15 years ago (I know right? madness) has gone through a serious renaissance in terms of its popularity since it got picked up by Netflix in what was one of their most triumphant moves yet. Although Netflix doesn't share it's viewing figures per se, several surveys have found that Friends is its most popular show, which might explain why they were so keen to keep a hold of it.

But camera angles, continuity, plot holes, and other such issues aren't the only blunders being spotted by fans. TBH, as sad as it is to admit, there are heaps of punchlines and storylines in Friends that have aged very badly. Speaking on Radio 5, writer Rebecca Reid flagged how many seriously problematic things happen in this show:

"The homophobia is staggering — the punchline of every joke about Ross is that his ex-wife is a lesbian, as if that's some failing of his and that it's hilarious that she's a lesbian. The sexism's pretty rampant as well... [and] it's the whitest show in the whole world."

Despite these issues, many people remain resolute fans, and dream of the show being reprised. Hopefully any potential new version of the show would have an updated joke roster, and offer more diverse storylines.