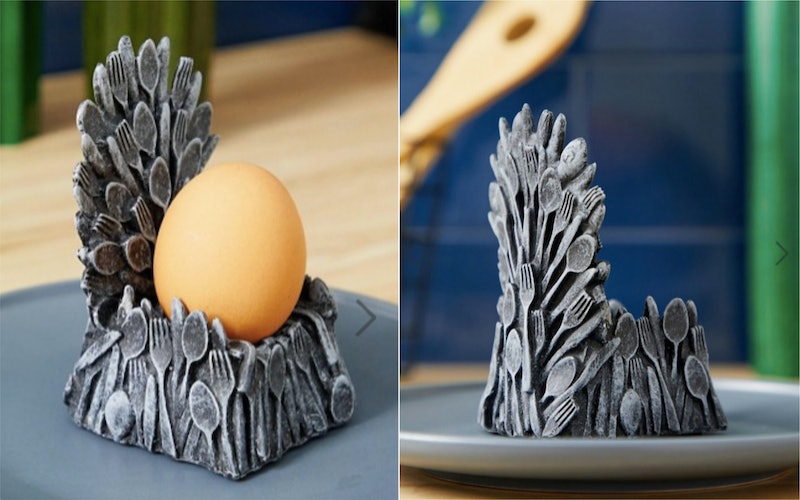 BREAKFAST IS COMING. Game of Thrones hype has (rightfully) reached its peak this week, as the final season finally graced our airwaves and blessed our lives with its dragon-y, incest-y glory. Though there are a number of different ways you might want to celebrate such a blessed occasion, this is one you may not have thought of before. You can get a Game of Thrones egg cup — or should I say an Egg of Thrones egg cup, as that is its official title — and make your breakfast unforgettable.

Basically, ASOS — provider of clothes but also everything else you never knew you needed — is listing a GoT-themed egg cup from Gift Republic that looks like a breakfast-themed Iron Throne. I never imagined that this could be a thing, but I'm so glad it is. Tiny forks, knives, and spoons make this throne complete — and probably easier to handle than if it was made up of mini-swords. When ASOS posted the cup on its Facebook page, titled simply with "Eating breakfast this morning like...🔎...", the internet exploded. The people want their eggs boiled. They want their eggs boiled and served to them on a goddamn throne.

People were quick to jump on Game of Thrones references in the comments, including imagining if a humble boiled egg really ruled the Seven Kingdoms. As one fan commented:

Unfortunately the product is currently sold out on ASOS, and what looks to be the same cup is sold out on Amazon as well. When it's back in stock, ASOS is retailing it for $16, which is a total bargain if you're looking to make every single morning of your life an epic adventure. Weirdly it doesn't seem to be the only design, as some people have tweeted GOT egg cups with swords instead of spoons and forks. Is there a thriving Game of Thrones egg cup market I've just been missing out on? The world is an amazing and confounding place.

Of course, if you're desperate to get your hands on some Game of Thrones merch then you don't need to let a sold-out egg cup get you down — there are so many more your ways to throw your money out the window all for the sake of a little taste of GoT grandeur. You can put your money where your mouth is and celebrate with the Game of Thrones Oreos that have been sweeping the country with their four epic designs. You could toast to the series with some Johnnie Walker White Walker whiskey — which is certainly a mouthful, but definitely worth it if you want to get your booze on as you enjoy the show. Or transform yourself into your own Sansa or Khaleesi with the Game of Thrones Urban Decay makeup mashup. Essentially take anything you can think of and you can probably find it for sale with a Game of Thrones twist.

Many of us have been waiting not just weeks and month, but years for the final series of Game of Thrones. Now that it's here, the fever isn't fading — it seems like it's just getting started. Egg cups may be here, but I bet we'll be seeing a lot more GoT merch before we're done. So stock up, because WINTER IS COMING.