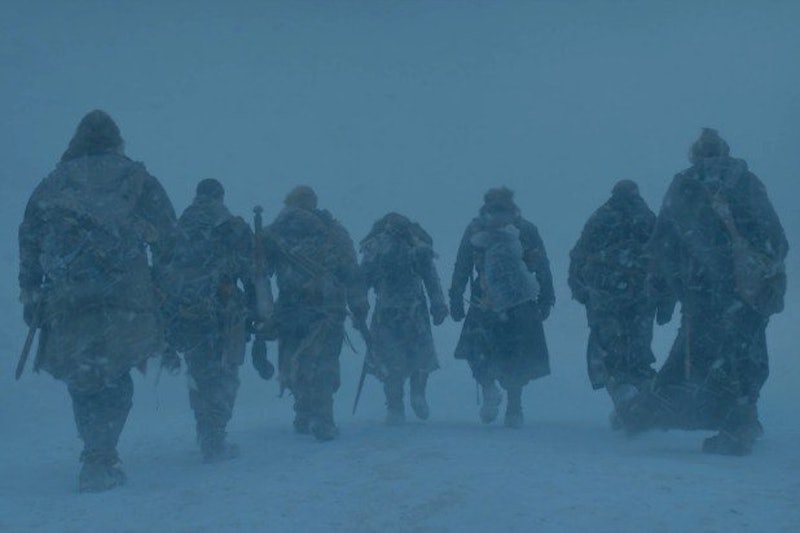 In what seems like either the bravest or most foolhardy decision in the show's history, Jon Snow set out beyond the Wall on a mission to kidnap a wight. And if this Game Of Thrones fan theory about the Last Hero is any indication, things might go even worse for Westeros' own "suicide squad" than viewers might have previously assumed. Naturally, Jon didn't take an army with him to face the hordes of the undead, but just a small group of warriors — most of whom bear bitter grudges against each other. Given that the upcoming episode is Season 7's penultimate installment, most viewers are probably expecting some major casualties; but if this theory proves correct, there may be even more than fans are emotionally prepared for.

Who is the Last Hero? He is a mythical figure from Westerosi legend, mentioned just once in George R.R. Martin's A Song Of Ice And Fire series, early in the first book. Shortly after Bran awakens from his coma, Old Nan tells the Stark boy a scary story about the man who faced the White Walkers during the Long Night:

"As cold and death filled the earth, the last hero determined to seek out the children, in the hopes that their ancient magics could win back what the armies of men had lost. He set out into the dead lands with a sword, a horse, a dog, and a dozen companions. For years he searched until he despaired of ever finding the children of the forest in their secret cities. One by one his friends died, and his horse, and finally even his dog, and his sword froze so hard the blade snapped when he tried to use it. And the Others smelled the hot blood in him and came silent on his trail, stalking him with packs of pale white spiders big as hounds…"

Old Nan is interrupted before she can finish, and the legend is never revisited except for one brief mention in the fourth book, when Samwell Tarly tells Jon Snow he read that the Last Hero managed to kill White Walkers with a dragonsteel blade.

There is some debate among fans about whether the Last Hero and Azor Ahai might be separate mythical figures, although most agree they were probably the same person. It's also not a prophecy per se, in the way of the prophecy of the Prince That Was Promised or the prophecy that Maggy the Frog gave Cersei, but rather just a legend told as a bedtime story. And yet, it has undeniable parallels to Jon's current situation, so it raises the question: Is history about to repeat itself?

But wait, you might be thinking; Jon is setting out in search of the White Walkers, not the Children of the Forest; he has six companions (Beric, Gendry, Jorah, Sandor, Thoros, Tormund), not 12; and there's no dog or horse in sight. What does any of this have to do with the Last Hero?

Well, Jon may not think he's searching for the Children… but unbeknownst to him, he's heading straight for a place of great significance to the elf-like creatures. A clue in the Episode 6 promo teases that the fact that the army of the undead is currently at the exact same place where the Children first created the White Walkers all those centuries ago.

Furthermore, even though only seven named characters marched out from Eastwatch at the end of Episode 5, a handful of random people (Night's Watchmen and/or wildlings) can be seen accompanying them. Although the total number of characters is unclear in the scene itself, a shot in the Season 7 trailer reveals the truth: The party consists of exactly 12 people. And if Jon's uncle Benjen — who was last seen North of the Wall mounted on a steed — were to suddenly arrive to help them fight the White Walkers, that would make Jon plus a dozen companions, a horse, and even a dog: Sandor Clegane, whose nickname is literally The Hound.

The parallels are too striking to ignore… and that's horrible news for Jon's motley crew. Remember what Old Nan said about what happened to the Last Hero's companions? "One by one his friends died, and his horse, and finally even his dog." Viewers may be expecting one or two of the group to die; but all of them besides Jon? That would certainly be a devastating gut-punch.

Now, I don't necessarily believe that all six of Jon's companions will die in Episode 6; the nameless soldiers are toast, probably Uncle Benjen if he shows up, and one or two others. But Sandor can't die until he gets the chance to face off against his brother, Gregor (which some fans claim can be seen happening in the Season 7 trailer), and it would be bad storytelling to reintroduce Gendry after a three-season absence only to kill him off one episode later with no impact on the plot whatsoever. So while I predict that at least a few of Jon's companions will make it back south with him at the end of Episode 6, I do think that their affiliation with the Last Hero myth might still doom them in the long run.

Even more important than what this theory may or may not mean for the fates of Jon's companions, though, is what it might mean for the King in the North himself. If the writers really are drawing these parallels purposefully — and it's not just a case of overzealous fans seeing signs that aren't there — then it could be their way of confirming that Jon Snow is the Last Hero, the Prince That Was Promised, Azor Ahai himself.

After teasing viewers this season with some misdirect that Azor Ahai might be Daenerys, it would be the most Game Of Thrones thing ever for it to turn out to be Jon Snow after all.