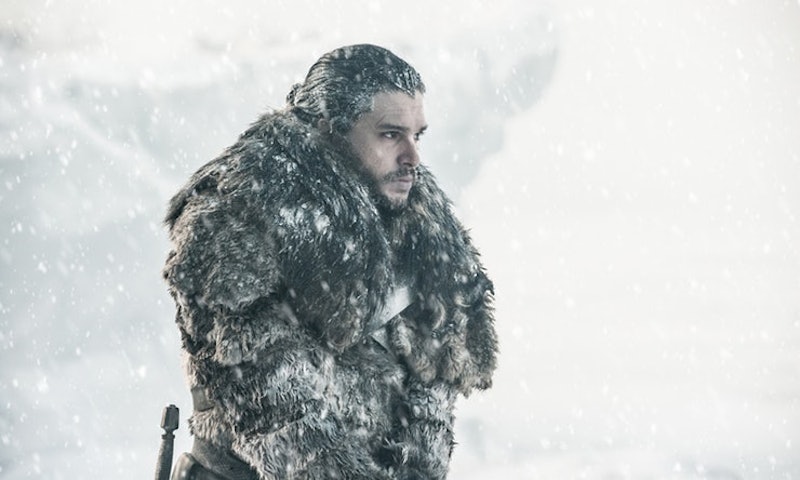 If you know Game of Thrones, then you know Jon Snow. He's the Bastard of Winterfell. In both the books and the HBO show, he's one of the main characters in a cast of seemingly thousands. He's almost certainly the secret Targaryen heir to the Iron Throne. And I have to say, as an irritating book person who loves to point out all the things that the show gets wrong... TV Jon and book Jon are not all that different. Book Jon is also serious, well-meaning, and very, very pretty.

If I have to split hairs, though, the main differences are that 1) the TV show is way ahead in the timeline, and therefore Jon is now a sadboy zombie who wants to bang his aunt and 2) in the books, Jon Snow forces a woman to give up her baby.

Or, at least he forces her to switch babies with the wildling "princess" he's crushing on, in order to save one baby from being burned at the stake. It's a whole thing.

In both the book and the show, you see, Jon's BFF Sam hits it off with a young woman named Gilly. She's a wildling, one of Craster's daughter-wives, and she's pregnant. She's terrified that she'll have a boy, and that Craster will sacrifice him to the White Walkers, because that's Craster's favorite thing to do.

So after Gilly has her baby, she escapes with Sam and makes it down to Castle Black, after fighting through some zombie hordes and bumping into Bran Stark on his way to go turn into a tree.

Meanwhile, Mance Rayder, the King Beyond the Wall, is attacking Castle Black with his free folk warriors. Mance is in the show as well as the book, but book Mance also has a wife, Dalla, and a super hot sister-in-law, Val.

Dalla dies giving birth to Mance's baby during the battle, though. With the help of Killjoy Stannis and his knights, the Night's Watch wins the day and takes Mance, baby Mance, and Val as prisoners. The baby is then given to Gilly to nurse, since the Night's Watch is pretty short on infant formula. So now Gilly has two babies: her own kid, nicknamed Monster, and Mance Rayder's unnamed son.

There's a whole lot of other political nonsense at play here — Stannis has Mance Rayder burned at the stake, but it's not really Mance Rayder, the Lady Melisandre has simply disguised someone else to look like Mance, and Mance is still alive. All the Night's Watch guys consider Val a wildling princess, and Stannis wants to marry her to Jon Snow to consolidate power. Jon likes Val, but also he's too damn honorable and angsty to give up his post in the Night's Watch for anyone, no matter how hot.

So Jon's stuck as Lord Commander of the Night's Watch, while trying to maintain Night's Watch neutrality during the Westerosi Civil War, trying to rescue his little sister from Ramsay Bolton, and trying to save all of humanity from the coming army of snow zombies. With all of that on his plate, though, he also has to try and make sure that Melisandre doesn't up and kill a baby right under his nose.

The "Red Woman" Melisandre isn't above murdering people to help Stannis get ahead in life, after all. She's always going on about the power of king's blood as a sacrifice to her fire god. In the show, she's already burned Stannis's daughter alive as part of a spell to make snow melt. In the books, Jon is worried that she might try to sacrifice Maester Aemon, the elderly Targaryen maester to the Night's Watch, since he's the son of a king of Westeros. Or she might go for Mance Rayder's wee baby, who's the son of the King Beyond the Wall.

Maester Aemon is declining rapidly, so Jon decides to send Sam to train at the Citadel and become the new maester for the Night's Watch. He sends Maester Aemon and Gilly with Sam, claiming it's too dangerous for them at the Wall. But first, he takes Gilly aside and tells her that she has to give up her own baby, and take Mance's baby instead.

Gilly wants to take both babies with her, but Jon tells her that if she doesn't do as he says, and Melisandre sacrifices Mance's baby, Jon is going to kill Gilly's baby as well.

Poor Gilly is forced to take Mance's baby with her and Sam as they voyage to Oldtown, and leave her own baby at Castle Black. She spends almost the whole trip grieving her child. It's only once Maester Aemon dies and Gilly and Sam have a spontaneous grief hook up that she starts to recover. She accepts her situation, and gives Mance's baby the peak fantasy name of Aemon Steelsong.

It's a tangled mess for everyone involved (except for maybe Sam, who's just trying to go to grad school). We can only guess what GRRM has in store for these two unfortunate wildling babies. But one thing is clear: Jon is being forced to grow up real fast.

Like his "father" Ned Stark before him, Jon is choosing to lie about a baby's identity in order to try and save him from death. That's noble in intent—but forcing a crying Gilly to give up her baby, and threatening to kill poor baby Monster is far from Jon Snow's best management strategy. He is trying his level best to live by his code of honor... but his choices grow increasingly cruel.

Let's hope that Jon can find that balance between "saving babies" and "threatening to murder babies" if he lives to see the next book.