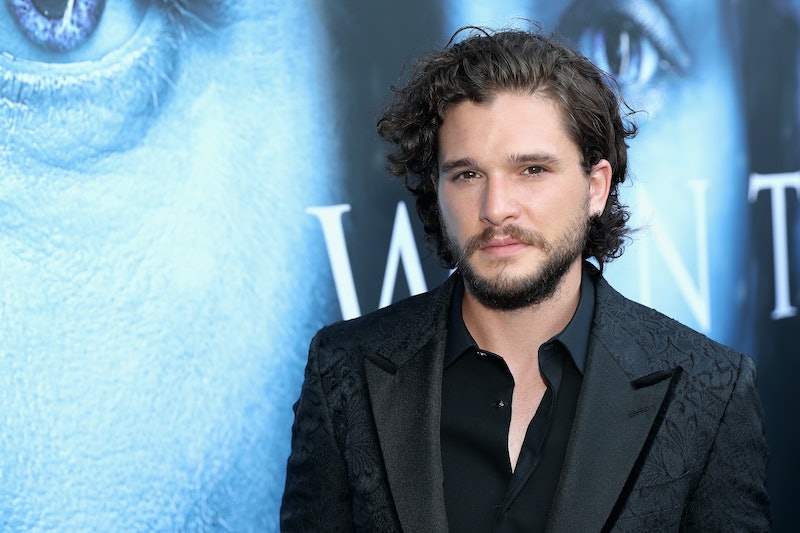 The release of the final season is inching closer, but in case you need something to speculate about in the meantime, there are clues from the Game of Thrones wrap party about where Season 8 is heading. According to photos snapped on the red carpet, Jon Snow-portrayer Kit Harington has not yet cut his hair. Gasp! It might not sound like a big deal, but it actually says a lot about what fans can potentially expect from his character for the final episodes, so stay tuned.

The popular fan website Watchers on the Wall had some insider details about the event at large, which took place in Belfast on Saturday. According to the site, there were performances from the Northern Irish rock band Snow Patrol, flaming dragon heads, drunken renditions of the HBO drama's theme song, and touching speeches from the show's creators David Benioff and D.B. Weiss. (All of which you can catch unofficial glimpses of on their site or on Twitter, because apparently the fans' invites got lost in the mail?) And of course, there were all the usual familiar faces in attendance; most interestingly, one face that was a little too familiar.

As of the moment Harington strolled into the party, he looked just like he does on the show, meaning he has not yet cut his hair. And given that that's the first thing the 31-year-old said he'd do when he wrapped filming, it suggests that little old Aegon Targaryen is working straight up until the bitter end. Which, in turn, suggests that if Jon Snow does bite it early, Weiss and Benioff are doing a good job of concealing that fact. Just something interesting to chew on.

For as mum as he's stayed about Season 8 spoilers, the one thing that Harington has never concealed is just how ready he is to chop off what have become his signature locks. When asked last month about his post-GoT plans in an interview with Entertainment Weekly, a haircut was the single most important item on Harington's to-do list. As he told the outlet:

"I’d like to step away and enjoy the obscurity, cut my hair, make myself less recognizable as the character, and go do and some other things with a completely new look and tone."

Now, skeptics might say, "Maybe he already got a trim, it's just not noticeable with the naked eye." But a trim, no matter how great, wouldn't exactly make Harington "less recognizable."

It's a good guess, but the actor's next couple lines in the interview kind of shoot down that theory. Harington promised a "short-short" cut, and he had plans for his facial hair, too. He continued:

“The beard will be harder to get rid of — I quite like the beard. I like having the long hair and beard both, but it will be like ritualistic thing. I can’t go into my next role looking the same. This role was brilliant, but I’ll need to get rid of Jon Snow.”

You heard it here first. Based on this interview, it sounds like the salon will be Harington's first stop after leaving set. So if the hair and beard are still around, there's a good chance it's because Jon Snow is as well, wrap party or no. Game of Thrones might have celebrated the end of production, but that doesn't necessarily mean the show is done filming for good. And if Harington is keeping his long locks, it looks like he's expecting to spend some more time as Jon Snow in front of the camera.

Speaking of big hair changes, take as a comparison Harington's castmate Sophie Turner. Just days ago, Turner went back to her natural blond, erasing the last traces of the red she added to play Sansa Stark, and leaving no doubt that she, at least, has likely wrapped her final episodes of Game of Thrones.

So keep your eyes on Harington for the next few days and weeks to see if those telltale curls disappear. And regardless, fans can breathe a little easier during Season 8, because if they're using him right up until the last minute, it certainly doesn't seem like the supposed Bastard of Winterfell is being cut down mid-season.