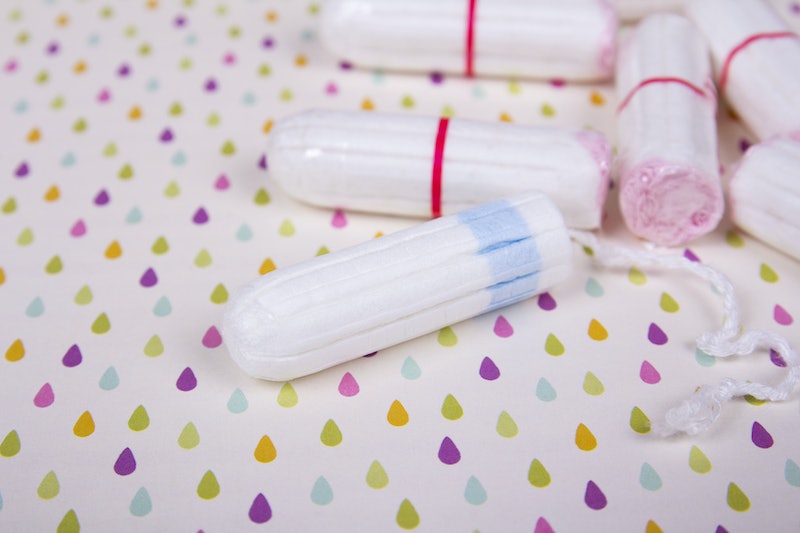 Getting your period for the first time can be an exciting, albeit nerve-wrecking, experience. It's no surprise, then, that a girl's period party is going viral online. On Jan. 9, Autumn Jenkins, 17, tweeted pictures of her cousin Brooke Lee smiling and holding up a cake that says, "Congrats On Your Period" in curly red frosting — rather appropriate considering the occasion. "I decided to have a little party for Brooke when she started her period because she has been waiting for this day for over two years," Shelly Lee, Brooke's mother, tells Bustle. "She has been carrying around her little 'emergency kit' since the fifth grade and, unlike me when I was her age, she really embraced the experience."

In her tweet, Jenkins said Brooke, 12, had started her period earlier that day and called her family "super extra," adding on a couple of amused emojis. Her pictures show Brooke grinning from ear to ear, surrounded by boxes of tampons and pads. So far, Jenkins's post has garnered nearly 7,000 retweets and twice as many Likes. Brooke tells Bustle she was surprised by the reaction, although parties aren't rare in her home. "It's not that unusual for us to celebrate small things with cake and presents," says Brooke, who's in seventh grade.

Her mother agrees, adding that she bought panty liners, pads, tampons, and deodorant spray for the start of Brooke's period. "I like making a big deal out of little things," says Lee, whose family is based in Florida. "I decided to order the cake and picked it up when I went to get all the additional (period) supplies she had asked for. ... I wrapped them all up, ordered pizza, and had a little celebration."

It was like any other party — there was food, cake, gifts, and camera-worthy moments — except how often do we hear about a family gathering to celebrate one's menstrual cycle? Seeing as how significant a someone's first period can be and how it's basically considered the start of puberty, I think having a period party is genius.

I wish I'd been just as excited as Brooke was when my period arrived. I still remember what happened when I got my menarche (that's the technical term for a girl's first period) like it was yesterday. On that day, my eighth grade chorus class traveled for several hours to sing in a regional competition. My stomach cramped up as I belted out "Do-Re-Mi" on stage, but I sang on, thinking it was nerves or something I ate. An hour later, I discovered a brownish red stain on my underwear in the girls' bathroom. Because I had a big sister, I could guess what the stain meant. When I told my chorus teacher my big news, she grinned and said, "Welcome." The singing competition was over by then, luckily, and I was back home before evening. I didn't have a party like Brooke's, but my mom did wrap me up in a blanket and give me a hot water bottle.

Like me, Brooke knew exactly what was going on when her period came during that weekend. "I had a big pimple on my forehead and I had been complaining about my stomach hurting. Then, well, you know," she says. "I was like, 'finally.' All my friends have had theirs already."

Although a period party like Brooke's is not exactly common in the United States, the idea of puberty rituals or coming-of-age ceremonies isn't new by any means. Similar events for women (and men) are hosted by families in countries around the world. For instance, girls in Sri Lanka celebrate their first periods alongside family and friends. As part of the celebration, the young women usually eat a lot, bathe twice, and dress up in a sari (a symbol of womanhood) and jewelry.

Needless to say, Brooke started her period with a bang (and, for the record, I'm thinking we should make period parties a thing now). She received more than 100 responses to her period party, many of them congratulatory. One Twitter user said, "Your family sounds great, that kind of support is super important!" Another Twitter user said, "I wish someone would do this for me every month."

A lot of people noted that Brooke's period party is a pleasant deviance from the usual response to menstrual cycles. People who menstruate are often socialized to feel embarrassed about their periods, even though it's an essential part of puberty. Even a menarche is the kind of event that kids are taught to keep to themselves or let adults (typically women) they're close to know in whispers. But parents like Lee, who hold period parties for their kids, teach them about puberty and encourage them to embrace those changes, can help turn that perception around.

"I want [kids] to be proud, not ashamed. Some girls are worried to death about people 'finding out.' All girls go through it," Lee says. "I just told Brooke to 'own it.' There is nothing to be embarrassed about .... I am proud of her for being confident and holding her head up high."