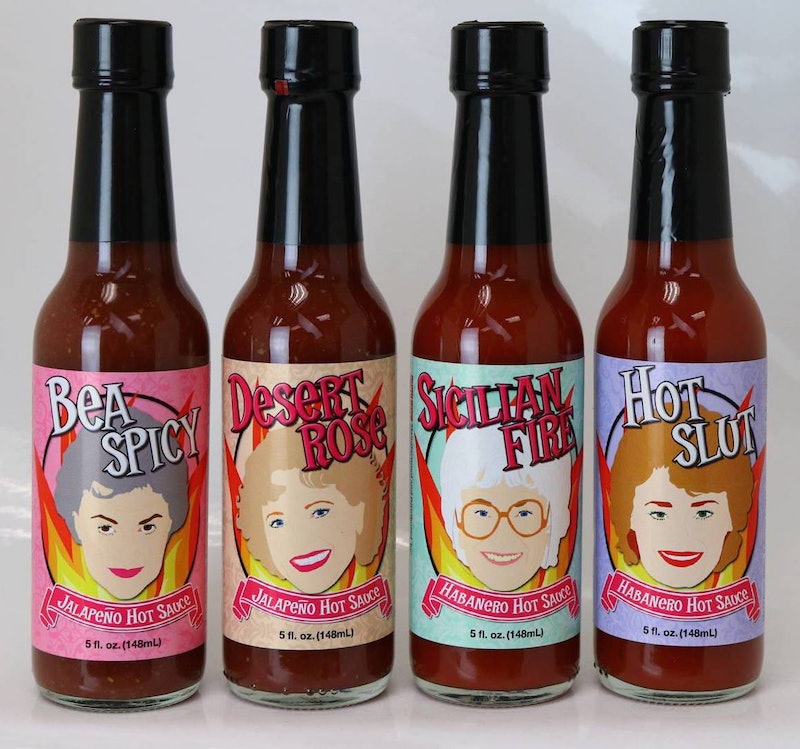 Friends, today is a wonderful day — but not because it’s Valentine’s Day (I have never really been a fan), and certainly not because all of the world’s ills have magically been solved (I am not convinced that is ever going to happen). No, the glory of today is brought to us by something silly and wonderful: Golden Girls hot sauce is an actual thing that really exists, and I am so much happier just knowing that fact. Sometimes you just need silly and wonderful, you know?

Offered by online retailer Always Fits, the hot sauce comes in four varieties, each named after one of the titular Girls: Bea Spicy for Bea Arthur’s acerbic Dorothy Zbornak, Desert Rose for Betty White’s good-natured Rose Nylund, Sicilian Fire for Estelle Getty’s wisecracking Sophia Petrillo,and Hot Slut for Rue McClanahan’s adventurous Blanche Devereaux. Bea Spicy and Desert Rose are the milder options of the bunch; they’re made with jalapenos, which typically score at around 2,500 to 5,000 units on the Scoville heat scale (the scale used to measure the spiciness of peppers). Sicilian Fire and Hot Slut, meanwhile, are made with habaneros, which score much higher — between 100,000 and 350,000 Scoville units — so if you’re looking for a real kick, those are the ones you’ll want to go for.

Indeed, Always Fit is careful to note on the sauce's product pages that Sicilian Fire and Hot Slut are not for the faint of heart:

So, uh, even though I’m seeing a lot of folks break out this GIF as a response to this delightful news:

I wouldn’t recommend doing that with these particular sauces. That’s going to sting.

You can buy each sauce separately for $10 a pop — or, you can just go ahead and get the four-pack, which nets you bottle of each type. Incidentally, the four-pack is on sale for $32 right now, so… well, I believe the words I’m looking for are:

Coincidentally (or, y’know, totally on purpose), Always Fits actually carries an entire Golden Girls collection, which includes things like the GG versions of Clue and Monopoly, an umbrella, and a makeup bag.But you know what the best part of this collection is? There are also Golden Girls prayer candles.

For the low, low price of $17.99 per candle, you can whisper your most secret wishes to Saints Dorothy, Rose, Blanche, and/or Sophia and ask for guidance during your hour of greatest need.

I don’t know about you, but having the ability to pray to the Girls of Gold as your deity of choice is perhaps the most magnificent thing I have ever heard. Now that is a life philosophy I can get behind.

Always Fits, by the way, looks like a place worth giving your business; created in 2009, it’s a “women-owned, women-run business with a penchant for feminist gifts, gifts with a splash of profanity, and colorful gifts,” according to its About page. The team lists Ruth Bader Ginsburg, Bev from The Goldbergs, Tiffany Hadish, Rhianna, Malala Yousafzai, and Punky Brewster as their heroes —along with, of course, Blanche, Rose, Sophia, and Dorothy. (No wonder they have Golden Girls prayer candles in stock.)

And now, your Golden Girls trivia for the day: Although Sophia was Dorothy’s mother, Estelle Getty was actually younger than Bea Arthur when the series began filming in 1985. Getty was born on July 25, 1923, while Arthur’s birthday was May 13, 1922. You may already have known that, but I just discovered it, and it was news to me, so I figured I would share the fruits of my labor. The more you know, right?