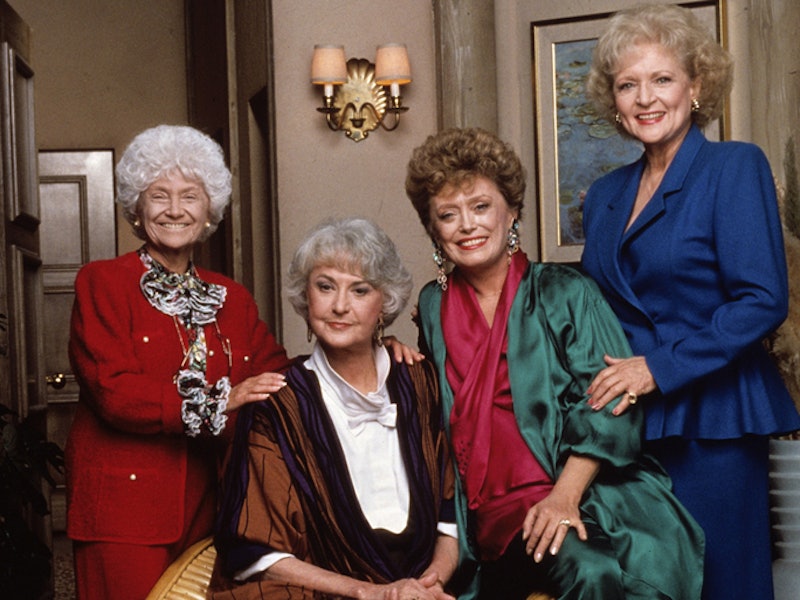 Different generations have distinct defining TV shows, but The Golden Girls can't be limited to just one. Although the beloved series premiered in the 1980s, it has endeared itself to people of all ages and backgrounds over the past 30-plus years, in large part due to the way it presented female characters in game-changing ways and tackled progressive issues. In Golden Girls Forever: An Unauthorized Look Behind the Lanai, writer Jim Colucci looks back at the iconic series and examines what made it the television staple that it has become. The new book incorporates in-depth interviews, photos, and episode synopses to reveal fascinating things even diehard Golden Girls fans never knew about their favorite show.

Colucci sheds light on everything from the series’ development stages to its lasting legacy. For fans, it’s incredible to see how everything came together, including the show’s premise, casting, set design, and some of its most memorable episodes. There are also lessons to be learned, both thanks to the show’s immense success and occasional failure. All in all, Golden Girls Forever is nearly as irresistible as the fabulous foursome itself.

Below are nine life lessons you can learn from The Golden Girls, based on Golden Girls Forever.

1. Change Can Open Up New Possibilities

When casting was done for The Golden Girls, Betty White was supposed to play Blanche while Rue McClanahan was set to star as Rose. As shooting neared, though, director Jay Sandrich ended up asking the women to switch parts. At the time, White had her doubts, but fortunately, she came around. The show never would have been the same if she’d walked instead.

2. Give Credit Where Credit Is Due

Like any show, The Golden Girls was a team effort. The four actresses may have done an amazing job, but they knew it wasn’t all them. In Golden Girls Forever, White and Bea Arthur can’t say enough good things about the show’s writing. Without the fantastic scripts, who knows how the series would be remembered?

3. Fight The Battles You Believe Are Worth It

The part of Dorothy was written with Bea Arthur in mind, but NBC wasn’t a fan of that idea at all. Arthur was unpopular with audiences after having played a character that got an abortion on the 1970s series Maude, so the network encouraged The Golden Girls creator Susan Harris to look elsewhere. Harris wouldn’t be deterred, though, and she eventually wore NBC down, giving us the perfect ensemble cast.

Broadway star Elaine Stritch was, at one time, up for the role of Dorothy. Of course, she didn’t end up landing the role, and to be honest, her audition sounds like it was the definition of awkward. “I think we can all look back in retrospect and realize that most things that happen to us happen because they’re meant to,” she says in Golden Girls Forever. We got Arthur, and she ended up in the American Theater Hall of Fame.

5. You Never Know What’s Ahead

If you’re like Betty White, you may not just have one opportunity of a lifetime. The actress has expressed her disbelief about being able to star in The Mary Tyler Moore Show, Boston Legal, Hot in Cleveland, and, of course, The Golden Girls. “I mean, how lucky can one broad get?” she once quipped. You’ve just got to be ready when opportunity comes knocking.

6. Balance Is A Good Thing

The four hilarious and distinct personalities of the Golden Girls is a huge part of what makes the show so memorable. White describes Rose, Blanche, Sophia, and Dorothy as “four points on a compass,” and it’s a good way of putting it. The women balanced each other perfectly — so much so that they inspired numerous onscreen female foursomes.

7. Give And Take Often Go Hand In Hand

The idea of just three Golden Girls feels wrong, but that was the original premise: three women (Rose, Blanche, and Dorothy) living in Florida with their gay houseboy, Coco. Unfortunately for Charles Levin, the man cast as Coco, Estelle Getty was so hysterically funny that the show’s producers decided to let him go and make Sophia a series regular instead. Great as it was to see Getty deliver her inappropriate one-liners, it’s also a shame that NBC passed on its opportunity to give viewers more diverse group of characters.

8. Don’t Put A Deadline On Your Success

It’s easy to look at our lives and think that we should have accomplished certain feats by certain points, but life doesn’t work on a schedule. Getty is a perfect example of that; the actress, then in her 60s, came to The Golden Girls with very little TV experience and managed to hold her own against three seasoned vets, often even stealing the show.

Based on interviews in Golden Girls Forever, the show’s stars were completely aware of how seriously they lucked out to be involved in such a game-changing series. It’s OK to count your blessings. In fact, you should take the time to appreciate them.

More like this
Jessica Simpson On The Time She Was Pursued By A Backstreet Boy & An *NSYNC Member
By The Editors
The Plane Crash In 'Dear Edward' Is Based On A 2010 Tragedy
By Grace Wehniainen
Netflix Shut Down 'Bridgerton' S3 Rumours About A “Very Dark” Storyline
By Bustle
The Banned 'Friends' Ad Shows Monica As You’ve Never Seen Her Before
By Sam Ramsden
Get Even More From Bustle — Sign Up For The Newsletter
From hair trends to relationship advice, our daily newsletter has everything you need to sound like a person who’s on TikTok, even if you aren’t.