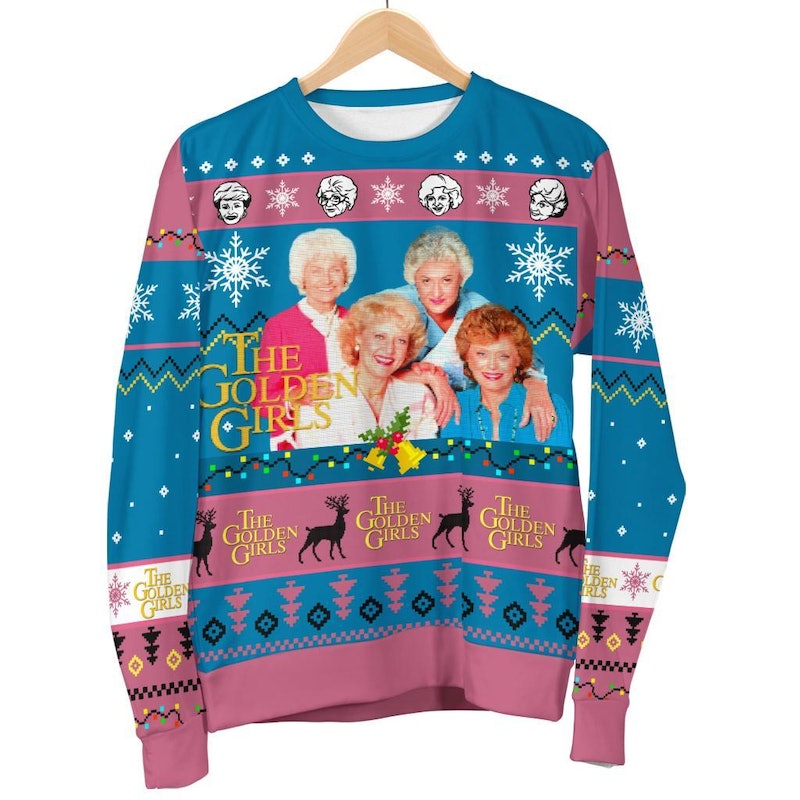 If you’re gearing up for an ugly Christmas sweater party or two in the near future, have I got the thing for you: You can now get a Golden Girls ugly Christmas sweatshirt to sport all season long. It isn’t a sweater, exactly — it’s a sweatshirt made to look like a sweater — but, I mean, let’s face it: It’ll still count. In fact, I would argue that it more than counts, because, well… just look at it. It is hideous and amazing.

I found the item at an online retailer called Epic Sunny — a shop about which I know absolutely nothing and therefore cannot vouch for, one way or the other — but it does appear to be available at a number of other, equally unfamiliar online retailers, so it’s probably not an exclusive design or anything like that. It’s also available in a few different styles, including regular crew neck, hoodie, and bomber jacket, and a wide range of sizes.

Although the item itself is a sweatshirt, its print is designed to resemble that of a sweater: The broad, pink and blue stripes are adorned with the kinds of shapes and details characteristic of Fair Isle or intarsia sweaters, diamonds, snowflakes, reindeer, and checkered bands. It gets some added punch from strings of holiday lights around the wrists, upper arms, and waist — and, most importantly, Blanche’s, Rose’s, Dorothy’s, and Sophia’s bright and shining faces featured front and center. The Golden Girls logo also runs along the bottom of the garment, while smaller versions of ladies’ faces line the top.

No one is really quite sure when or where the ugly Christmas sweater first reared its eyesore of a head; in the UK, at least, the long-running joke is that they appear annually at holiday celebrations as gifts presented to youngsters made by well-meaning, if somewhat clueless, relatives. (The whole thing about the sweaters Molly Weasley sends all her kids and Harry each Christmas season in the Harry Potter series? That’s what that gag is riffing off of.) By most accounts, these horrible pieces of apparel entered the pop culture lexicon, both in the UK and in the United States, in the 1980s, thanks to a combination of sitcom gimmicks and television personalities. At the time, they were sort of a dad joke made tangible — an item the dad in question found delightful or hilarious, but which everyone else found extremely uncool.

As is often the case with clothing items that are inherently uncool, however, ugly Christmas sweaters have come back in style over the past decade or two, thanks to the trend of wearing things ironically. An ugly Christmas sweater might not be considered socially acceptable if worn sincerely, but if worn ironically, it is more than socially acceptable; it is worthy of celebration. The uglier, the better.

When did this changeover happen? And, perhaps more importantly, why did it happen? Much like the sweater’s origin, it’s not exactly clear. Some point to the big screen adaptation of Bridget Jones’ Diary, which was released in cinemas in 2001, as the moment at which the ugly Christmas sweater began to come back into vogue; few things are as delightful as the image of Mark Darcy as played by Colin Firth — a dashing example of a human being, if ever there was one — wearing the most remarkably tacky sweater out of filial duty. Others, however, simply note that in the early 2000s — 2001 according to one account, 2002 in another — the very first ugly Christmas sweater parties were held, thus giving rise to an enduring holiday tradition of gathering together to revel in the absurdity of hideous, seasonally-appropriate knitwear.

Whatever the case, the ugly Christmas sweater is now firmly entrenched in holiday celebrations all over the place — and if you’re looking for a new one to add to your ironic holiday wardrobe, you could do worse than a Golden Girls-themed option. Happy holidays!