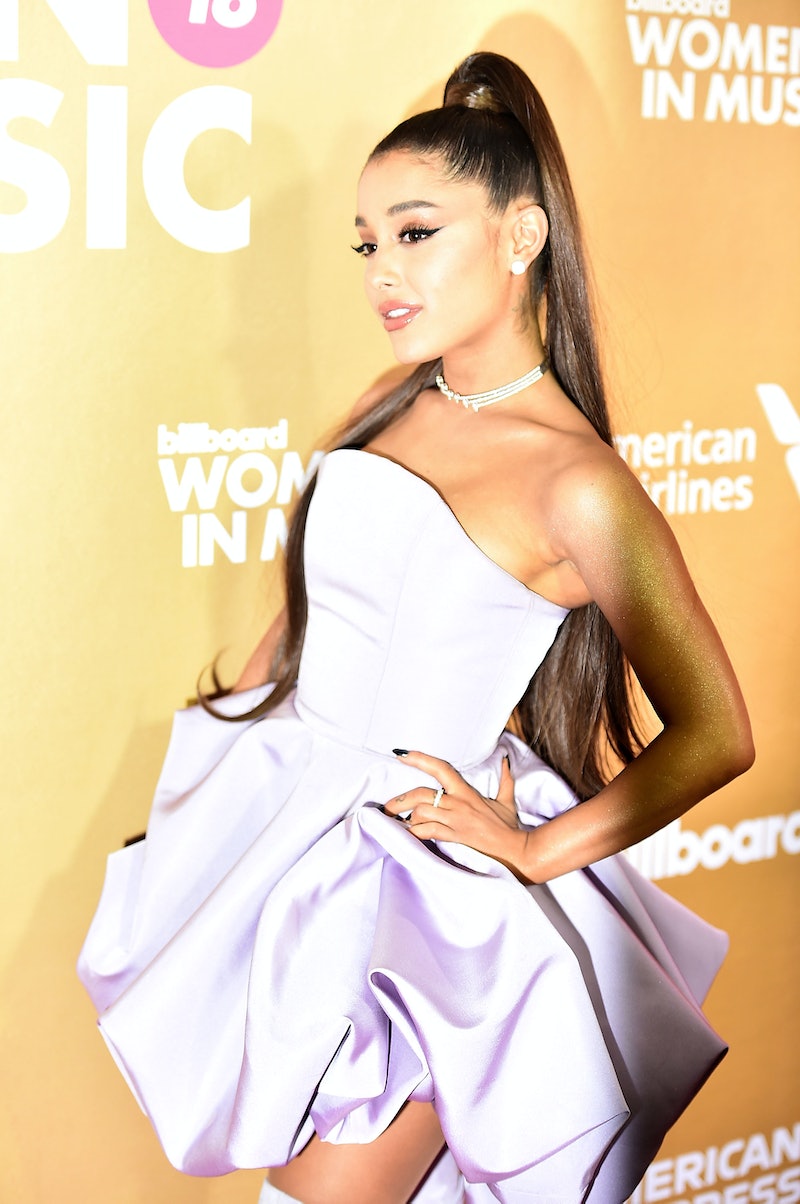 Ariana Grande isn't afraid to say, "Thank U, Next" to an invitation to perform during music's biggest night. One of the most current artists on the charts, Grande recently pulled out of the Grammys lineup due to a disagreement with the show's production team. In the situation's most recent development, Grammys producer Ken Ehrlich responded to Grande's tweets that accused him of lying about her decision and stifling her "creativity and self-expression." Bustle has reached to Grande's representatives for comment, but did not hear back at the time of publication.

"I saw those tweets and what she said. I guess it was a surprise," Ehrlich told Rolling Stone. "I will say this, and they don't want me to say it but I'm going to say it: The thing that probably bothered me more than whatever else she said about me is when she said I'm not collaborative."

On Feb. 7, Grande posted a thread of tweets in response to an Ehrlich interview published by the Associated Press in which he said Grande "felt it was too late for her to pull something together," which is why he claimed she chose not to perform on Sunday. Grande said that's not the case —Variety reported that she chose to discontinue her performance because the producers wouldn't allow her to perform "7 Rings," a single from her album, Thank U, Next, which released on Feb. 8. Grande and the producers reportedly reached a compromise that would include "7 Rings" in a medley, only on the condition that the second song would be of their choosing. That's where Grande drew the line. Variety also reported that the other performers of the night, including Cardi B, Lady Gaga, and Travis Scott, were not subjected to such firm stipulations.

On Feb. 7, Grande tweeted, "i've kept my mouth shut but now you’re lying about me. i can pull together a performance over night and you know that, Ken. it was when my creativity & self expression was stifled by you, that i decided not to attend."

In another tweet, she elaborated. "i offered 3 different songs. it's about collaboration. it's about feeling supported. it's about art and honesty. not politics. not doing favors or playing games. it's just a game y'all.. and i'm sorry but that's not what music is to me."

Ehrlich responded to Grande's tweets, by telling Rolling Stone, "The fact of the matter is — and I actually wrote a little thing in the middle of the night that I'm not going to do anything about, but, I mean. You can ask Christina Aguilera, who I asked to do 'It's a Man's World' for James Brown. You can ask Melissa Etheridge, who finished her cancer treatment and I put her out on stage, bald, doing Janis Joplin. You can ask Ricky Martin who overnight became the creator of the Latin music revolution. Ask Mary J. Blige, who was scared sh*tless to go out there and do 'No More Drama.' I basically worked with her to mold it. Ask H.E.R. who's in this show."

For her part, Grande still expressed gratitude to the Grammys for her nominations. She tweeted, "hope that helps everyone understand my decision. i am still grateful for the acknowledgement this year."

Grande is up for two Grammy awards — Best Pop Vocal Performance and Best Pop Vocal Album. Knowing she won't be in attendance, it will be interesting to see how the singer responds if she takes home an award — and how this disagreement will affect her relationship with the Grammys in the future.