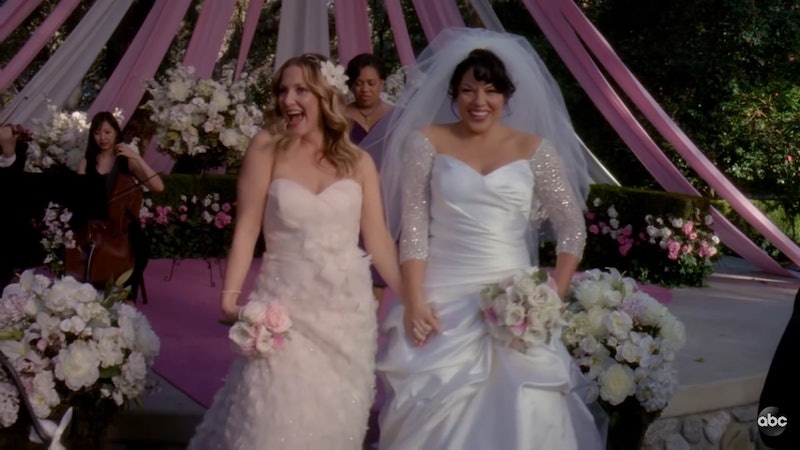 When Grey's Anatomy left ambiguous whether Callie and Arizona would rekindle an old flame in the Season 14 finale, some Calzona stans felt burned. Enter the Grey's Anatomy Calzona Comic Project, an illustrated new chapter for the ex-wives, courtesy of a crew of self-proclaimed "fangirls" who took matters into their own hands to "give Calzona the endgame they deserve."

Now available digitally in five languages, the comic book is dedicated to Drs. Callie Torres (Sara Ramirez) and Arizona Robbins (Jessica Capshaw) — the history-making TV couple that lead the charge for LGBTQ+ representation in primetime. For anyone needing a refresher, at the end of last season, Arizona decided to leave Seattle's Grey Sloan Memorial, relocating to New York where she and ex Callie could more easily co-parent their daughter Sofia. While a series of promising text messages seemed to indicate a reconciliation ahead for the pair, Calzona fans never got the opportunity to see Arizona and Callie together again, following Ramirez's Grey's departure in 2016.

To be fair, Shonda Rhimes did say on Aug. 8 that she tried to make the reunion happen, but cited CBS having a "hold" on Ramirez — who joined the network's political drama Madam Secretary last year — for the failed attempt. However, Ramirez tweeted on Wednesday, Sept. 26 that there's still a chance Callie could return for a guest appearance on Grey's one day. She wrote: "For the record @CBS has been nothing but gracious and generous to me. They are open to Callie coming back! The ball is in @ABCNetwork‘s court." (Bustle reached out to ABC for comment on Ramirez's tweet, but has not received a response.)

Either way, superfans Jade Spratt, Elisa Sixtos, and Ana Vasquez put their talents to work, giving Callie and Arizona the comic book treatment — and explicitly spelling out a happy ending. "We love this fandom and we think that this project will help bring closure to what we all have been asking for the past few years," Spratt, who wrote the text, told Bustle on Wednesday, Sept. 26.

The comic book begins where the Grey's ended last season, showing Arizona packing her suitcase and jetting off to New York City's JFK Airport with Sofia. "If time and distance has taught me one thing," muses the comic version of Arizona, "It's that love never dies." After a tearful reunion, the snuggled-up pair can be seen lovingly watching Sofia fly a kite in Central Park.

The crowdfunded piece of fan fiction, even got a seal of approval from Rhimes herself. "What an amazing fan love letter to #calzona!" the Shondaland founder tweeted on Sept. 26, along with a link to an article from Autostraddle, an indie website geared toward "multiple generations of kickass lesbians, bisexual & otherwise inclined ladies (and their friends)."

Rhimes' tweet validated what creative consultant Vasquez felt all along. "From the beginning, I knew it was going to be a very special project," she told Bustle, giving a shoutout to supporters who donated or simply helped spread the word. "Mostly because of how much Callie and Arizona mean to me and because I got to be part of an amazing and talented group of women; but also because of all the love and support we got from fans all over the world ... I feel proud and happy."

When the two-hour Season 15 premiere of Grey's Anatomy debuts on Thursday, Sept. 27 at 8 p.m. ET on ABC, fans will likely feel the absence of these characters (along with Sarah Drew's Dr. April Kepner, who also left Grey Sloan by the May finale's end). Still, Sixtos, who contributed her artwork to the Calzona comic book, was happy to soften the blow for some fans.

“It just makes me so happy that my art is reaching more and more people," she also told Bustle. "It's like a dream come true.”

Seeing a happy ending for Callie and Arizona is undoubtedly a dream come true for their other fans across the world, too.

More like this
Nicola Coughlan Shared A Lady Whistledown Excerpt From ‘Bridgerton’ Season 3
By Grace Wehniainen, Alyssa Lapid and Sam Ramsden
Viserys’ Fate On 'House Of The Dragon' Could Differ From The Book In This Surprising Way
By Grace Wehniainen
'The Lord of the Rings: The Rings of Power' Revisits Iconic Spots From 'The Hobbit'
By Darshita Goyal
A New 'And Just Like That' Table Read Pic Confirms A Key Character's Return
By Jack Irvin and Grace Wehniainen
Get Even More From Bustle — Sign Up For The Newsletter