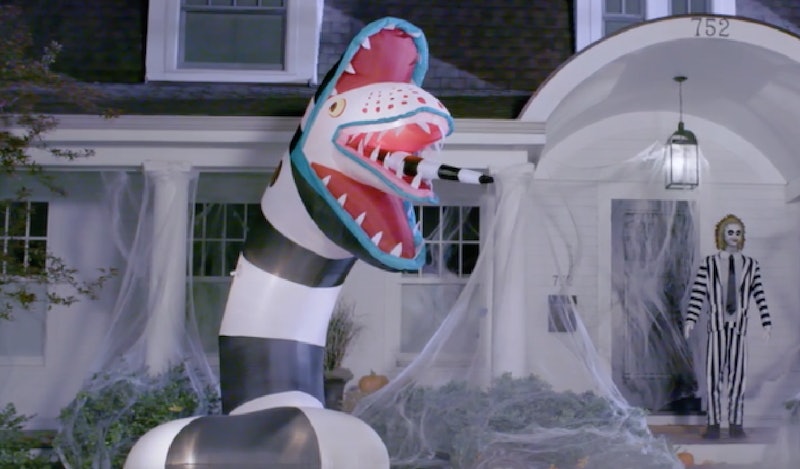 If you have a couple of hundred bucks burning a hole in your pocket and have been thinking your front lawn really needs a gigantic inflatable monster that will tower above you and your neighbors, then today is your lucky day. I can’t imagine why anyone needs nearly 10-foot Inflatable Beetlejuice Sandworm, but Home Depot is selling one — and people are loving it. If you don't remember the sandworm, it's a creepy-crawly creature who darts in and out of the sand in the iconic Beetlejuice movie and it's scarily perfect for Halloween. Whether you want to have the most larger-than-life Halloween decorations on the block or you just love Beetlejuice, this ornament is going to take things up a notch.

The Pre-Lit Inflatable Animated Beetlejuice Sandworm self-inflates to stand around 9.5 feet tall and, according to the reviews, is a perfect likeness for the sandworm from the movie. It self-inflates for an easy setup and comes with stakes to make sure that your snake doesn’t go with it anywhere. It even comes with a motor installed to help the snake’s creepy tongue move around. Basically, this is the most epic of all epic floats.

“This giant Beetlejuice sandworm is very tall at just over nine feet and six inches,” one reviewer wrote. “Our kids absolutely love it. It's hilarious. Complete with lights inside and a spinning tongue or zebra tail or snake or whatever it is coming out of its mouth.”

Not only that, it has a slew of other delighted reviews singing the praises of this gargantuan even snake. Of course, it doesn’t come cheap — that much entertainment never does. But if you’re ready to drop $179 at Home Depot, then you can snag one of these for yourself. It may seem like a lot of money, but with a decoration this big it's best to think of it on a price-per-foot basis, which makes it suddenly seem far more affordable.

It’s safe to say that this year hasn’t been at all short on inflatables. Although we normally think of them as a summer favorite, it’s nice to see giant inflatables getting an autumnal twist. This year we’ve already had Target’s epic inflatable pools, which were totally chic and amazingly affordable. We’ve even seen pink glitter inflatable chairs for your pool that can help you relive your 90s child vibes.

But the ultimate inflatable of the year has to go to the $2,000 inflatable Twister board. That’s right — 15 feet by 15 feet of incredible Twister goodness, with a huge price tag attached. Only for the biggest Twister/inflatable enthusiast, that has to be one for the record books.

But if you’re looking to really give this Halloween a Beetlejuice bang, the massive Inflatable Beetlejuice Sandworm seems like a pretty good place to start. Pair it with a few key items from Hot Topic’s Beetlejuice-themed collection and you’ll be ready to ring in some undead Halloween vibes. They've got everything from lunch boxes to journals to a flask with a Beetlejuice twist, perfect for the hardcore fans.

Halloween decorations tend to get bigger and better every year, as people really get into the holiday spirit — but an inflatable snake with an animated tongue that stands at nearly 10 feet tall is definitely one of the most intense decorations I've ever seen. When it comes to Halloween, it's time to go big or go home. I choose to go big — and I hope you do the same.

More like this
The Viral TikTok “30,000” Sound Fits Nearly Every Scenario
By Courtney Young
What The History Of Pride Month Means For Celebrations Today
By Jay Polish
25 Quotes About Love To Share During Pride Month 2022
By Madeleine Aggeler and Emma Garza
Meet The Disney Imagineer Bringing 'Guardians Of The Galaxy' To Epcot
By Charlie Mock
Get Even More From Bustle — Sign Up For The Newsletter