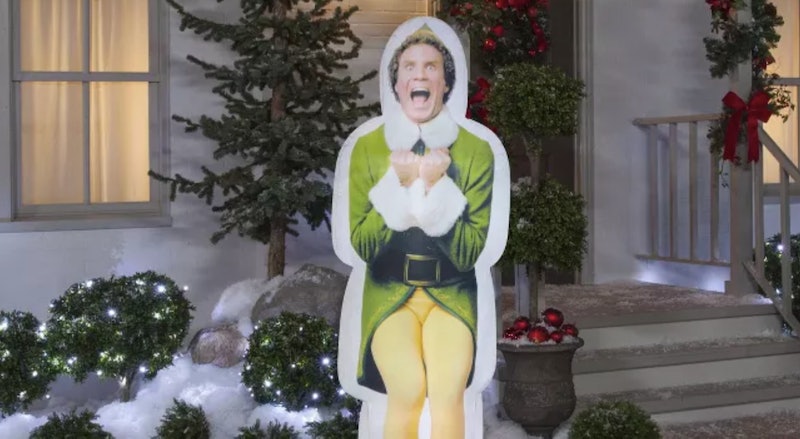 The best way to spread Christmas cheer might be singing loud for all to hear, but I’d argue that this nearly life-sized, inflatable Buddy The Elf lawn decoration is a close second. It’s currently available at Target, as House Beautiful pointed out earlier this month; what’s more, it’s on sale for $40, which is $10 off its regular price of $50. The bad news is that it’s also out of stock at Target right now — but, hey, guess what? I did a little digging and found a few other places you can get it, as well. And since nobody gets more excited than Buddy during the holiday season, it’s the perfect way to celebrate the transition out of spooky season and into the colder months.

According to House Beautiful, the inflatable Buddy decoration made its debut at Target earlier this year. I call it nearly life-sized because, at 72.05 inches tall, it’s actually a tiny bit shorter than Will Ferrell is: The inflatable Buddy stands at just about six feet in height, while Ferrell himself is 6’3”. Regardless, though, it’s suitable for both indoor and outdoor use, so even if you don’t have a lawn, per se, you’ll likely be able to find somewhere to display your new pal throughout the season. Heck, why not move him around a little bit each day? The Elf on the Shelf has somehow become A Thing, after all, so why not take the idea to the extreme with an elf that’s too big for most shelves, but perfect for, say, your couch, or the corner of your kitchen, or the inside of your shower where it will lurk out of sight, waiting patiently to scare the pants off the first person who opens the shower curtain?

Alas, the first batch of Target’s supply seems to have sold out pretty quickly; it was already gone by the time House Beautiful’s post about the inflatable decoration went live on Oct. 6. You can sign up to get notified when it’s back in stock, though — and if you really can’t wait that long, it’s also available at Home Depot and Amazon, albeit for a higher price. At Home Depot, the “pre-lit, airblown” figure will set you back $69.98; meanwhile, at Amazon, it’s $64.99.

It’s perhaps worth noting that, although the Target option is by far the most affordable, it’s not clear whether it includes the stakes and tethers required to keep your inflatable Buddy standing and stationary on your lawn. The Home Depot and Amazon listings note specifically that the item includes stakes and tethers; they also state the figure self-inflates for easy setup. The Target listing, however, includes neither of these details, stating only its dimensions (72.05 inches high, 20.47 inches wide, and 22.84 inches deep), its material (polyester), and where it’s suitable for use (both indoors and outdoors). Just, y’know, bear that in mind.

If an inflatable Buddy feels like a bit much to you, you can also get yourself a regular ol’ Buddy The Elf-shaped cardboard cutout; a somewhat absurd Buddy The Elf holiday wreath; or a more sedate Buddy The Elf scented candle that legit smells like cookies. No matter what your level of devotion to Elf is, there’s a Buddy decoration out there for you. Just, uh, maybe exercise some restraint in the candy spaghetti department; that one… usually doesn’t end well.