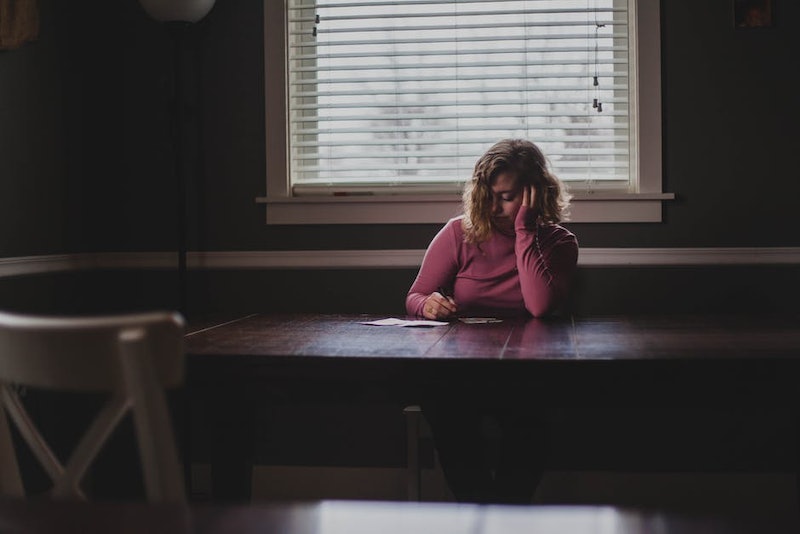 You know that post-breakup feeling when you can't even imagine eating? You know how a day or two later, you're elbow-deep in a carton of Ben & Jerry's? There's a reason you don't feel like eating after a breakup — and then feel like eating all the food — says science, and it comes down to your hormones.

After you experience a breakup, your body enters fight-or-flight mode, particularly if the breakup wasn't your decision. You go through a number of physiological changes, including an increased heart rate, and higher levels of cortisol and adrenaline. When this happens, it can mean having difficulty sleeping, feeling stomach pangs, and losing your appetite. Your body is trying to survive and adjust to this high-stress scenario, says Professor Gert ter Horst, who works in neurobiology in the Netherlands. Thus, your body adjusts by suppressing hunger and slowing digestion, so that eating doesn't need to be such a huge priority.

But why do emotions overlap with hunger so much? Horst told Vice, "The areas of the brain in charge of emotions and emotional pain also [regulate] how we eat, our need for food, and what we taste." These areas are near each other and thus can influence one another.

But don't worry — you'll bounce back; and boy, will you. Give it some time and your appetite will return; but you're not going to crave a salad. Similar to how we behave after waiting too long to eat or giving up on a strict diet, we want all the fattiest, tastiest foods. Our bodies (and minds) want to make up for the calories we lost. Plus, when you experience a breakup, your oxytocin levels plummet (it goes up when you fall in love). All of this means ordering Chinese every night and eating peanut butter straight out of the jar until things start to feel normal again.

To be fair, I eat peanut butter straight from the jar in general. But we'll save that for another time.

In related news that shocks no one, women are likelier to experience this whole process, compared to men, since we respond to breakups and broken hearts uniquely, and our bodies handle stress differently from men. Science has come to this conclusion more than once. Researchers at Binghamton University and University College London found that women are hurt more by breakups, although they then bounce back better. The reason why is pretty fascinating: it's all about evolution.

Ye have been warned: the evolutionary explanation is heteronormative AF. Craig Morris, the lead author of the study, says, "Put simply, women are evolved to invest far more in a relationship than a man. A brief romantic encounter could lead to nine months of pregnancy followed by many years of lactation for an ancestral woman, while the man may have 'left the scene' literally minutes after the encounter, with no further biological investment. It is this 'risk' of higher biological investment that, over evolutionary time, has made women choosier about selecting a high-quality mate. Hence, the loss of a relationship with a high-quality mate 'hurts' more for a woman."

The men will have their own battles, however, as they still feel a deep and prolonged loss because they have to start "competing" for a woman all over again.

However, regardless of these differences between the sexes, it's probable that what matters more is who initiated the breakup. The person who gets rejected is understandably going to have a harder time coping than the person who does the rejecting, in most cases.

So if you're going through a breakup, take comfort, ladies, in knowing that if your appetite is all over the place and you go from hating the mere sight of food to licking the inside of a pudding cup, it's completely normal. This too shall pass.