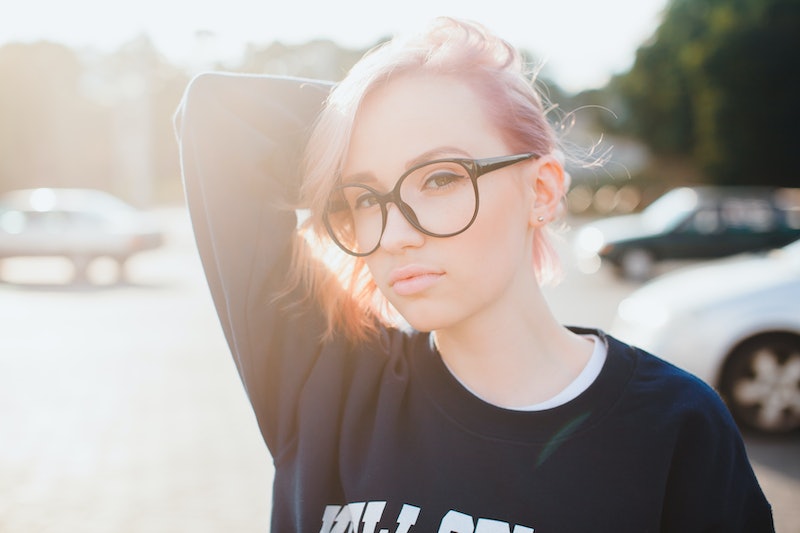 Fact: Breakups don't get any easier, no matter how many relationships you've had. There's no single solution for how to get over a breakup, but there are definitely major no-nos to avoid if you've just gone through a split. One theory says it takes half the length of time you dated someone to get over that person. Whether or not that's true doesn't take away from the very real pain of actually getting over him or her.

Everyone deals with a breakup in different ways, depending on their personality and the nature of the breakup, says Dr. Grant Brenner, MD, co-author of Irrelationship: How We Use Dysfunctional Relationships to Hide From Intimacy . "You have to know yourself and know what works and what doesn't work as far as coping goes," Brenner tells Bustle.

Maybe you and your ex decided to go your separate ways together, or maybe it wasn't mutual. Even if you were the one who thought splitting up would be best, it still takes time for you to get used to being single and not having your former partner around. If you're not careful, it can be easy to make bad decisions for your physical and emotional health. Here are some of the worst things you could possibly do while going through a difficult breakup:

Avoid having free time and instead distract yourself by socializing or enjoying your favorite hobbies. "Don't leave yourself a lot of unstructured time on the weekend with nothing planned. You don't want to sit at home and feel miserable and maybe start texting the person," Brenner says.

2. Not Taking Care Of Your Basic Needs

One of the most detrimental things you can do during a breakup is not put yourself first, Brenner says. Putting yourself first is all about practicing self-care and listening to your body during a really difficult time. This includes sleeping well (but not all day), eating well and getting enough exercise.

3. Reminiscing Too Early After It's Over

It's hard, I know, but restrain yourself as much as possible from going through your ex's Facebook profile and looking at old love notes you sent to each other. Brenner says that reminiscing from that relationship can just make the breakup even more traumatizing. "If you're going to be looking at old photos, if it's shortly after the breakup it may make you feel heartsick to do that," he says. "But later on when emotions are more settled down, then you can kind of make sense (of it all) and look back on the relationship and come to terms with it."

4. Dragging Out The Breakup

The past is the past. If the breakup is final, trying to save what's probably a lost cause can be emotionally harmful for both parties. "They could keep communicating with the person when they don't want to," Brenner says. "They'll tell themselves they won't keep dragging it on but then they do it anyway." It's only when you're able to accept that the relationship is over that you can start moving on with your life.

5. Rebounding, But Only If It Makes You Feel Worse

During a breakup, avoid doing anything self-destructive or unhealthy or that just makes you feel worse about the whole situation. That can include hooking up and rebound relationships. While hookups can totally be a healthy way to distract yourself, be honest about whether this will actually help you get over your ex.

"When people are on the rebound, they're often emotionally vulnerable," Brenner says. "A lot of times when people can't stand being alone or lonely, they have low and distorted standards of who they're willing to date." Instead, get to know yourself again and steer clear of casual flings "unless there's someone who can keep things chill on the rebound and you're capable of hanging out with someone who won't get caught up in some weird situation or take advantage of you," he says.

6. Confiding In The Wrong People

Sometimes even the people closest to you can be at a loss for words and end up saying the wrong thing instead, such as "Just get over it already" or "This isn't a big deal. It's just a breakup." If you're reaching out to people in your social circle that are trying to tell you how to feel or what to do without actually listening to you, they may not be the best confidantes.

7. Going Through The Breakup Alone

That being said, Brenner says it's still important to have people you can turn to on tough days when you need to talk it out. Find a good listener, whether it's your mom, sister, counselor, or best friend, and ask if they're free to talk for 10 minutes in the evening. (Don't talk for hours, because you may end up obsessing over the very person you're trying to forget.) If there's nobody like that for you whom you can trust, sometimes the best way to handle the end of a relationship is to write it all down.