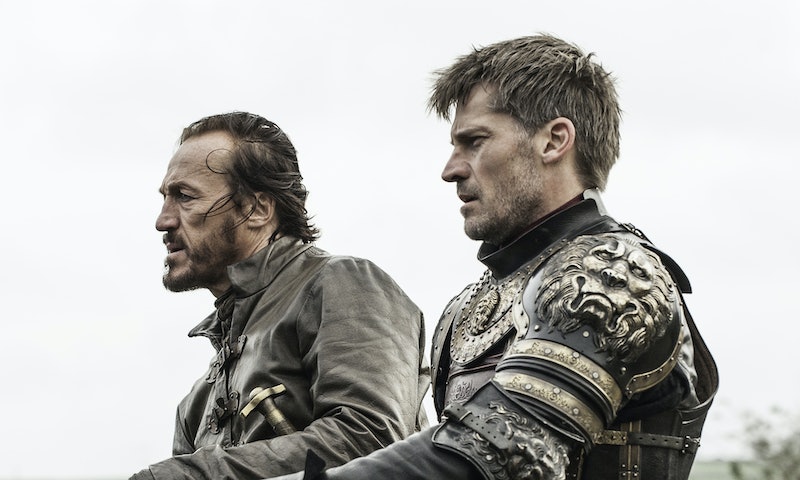 If you've been waiting (im)patiently for Daenerys to finally unleash her dragons on Westeros, then the newly-released Game Of Thrones photos from Season 7, Episode 4 — titled "The Spoils Of War" — should certainly make you happy. One picture in particular, of Jaime and Bronn astride a pair of horses, seems to indicate that there is a dragon battle coming sooner to Thrones than fans might have thought. And after several episodes of trying to conquer the Seven Kingdoms through strategy, it appears that the Mother of Dragons may abandon all that and go for brute strength instead.

Ever since the last Season 7 trailer, Thrones has been teasing the a climactic battle in which Dany's dragons and Dothraki soldiers would descend upon Westeros, facing off against Lannister soldiers. But if you thought that sounded like something the season would hold off until closer to the end, well… in the words of Ramsay Bolton, you haven't been paying attention. After a relatively quiet premiere, the second and third episodes both featured major battles (Euron's defeat of Dany's fleet, and the Unsullied invasion of Casterly Rock), and it looks like "The Spoils Of War" will keep the pedal to the metal with the third straight battle episode in a row.

"Enough with the clever plans," Dany says in the promo for "The Spoils Of War." Tired of being outmaneuvered by Cersei ever since arriving on Dragonstone, the Mother of Dragons clearly plans to turn the tide of the war. But the picture of Jaime and Bronn, concerned looks on their faces, is the first indication that the major battle teased in the trailers will in fact be happening in the fourth episode. (That and the sight of a dragon swooping down out of the clouds in the episode's promo.)

The decision to attack the Lannister forces now makes a lot of sense, both plot-wise and thematically speaking. Jaime and his soldiers are on their way back to King's Landing after the sack of Highgarden, bringing with them all the Tyrell gold that Cersei plans to pay off the Iron Bank with. What better time to deliver a crippling military defeat than in a moment that both catches the Lannisters unawares and also foils their plans to get the scrupulous banker Tycho Nestoris on their side?

But the upcoming collision of forces will have an even deeper resonance for fans with an intimate knowledge of George R.R. Martin's source material. One of the most famous battles in Westerosi history occurred during Aegon's Conquest; known as the "Field Of Fire," it was the only time all three legendary Targaryen dragons (Balerion, Vhagar, and Meraxes) took to the battlefield alongside one another, a fearsome and terrible sight to behold. What makes that historical event relevant here is that the battle at the Field Of Fire was fought between the Targaryens and the Lannisters — and it took place in the Reach, the kingdom ruled by Highgarden, where Jaime and all the Lannister soldiers are now.

Is history about to repeat itself? If so, that doesn't bode well for the Kingslayer. The Field Of Fire was a decisive victory for the Targaryens, absolutely decimating the Lannister forces. 4,000 men were burned alive by the three dragons, with an additional 1,000 dying from other battle-related wounds. The swords of all the defeated soldiers were shipped down the Blackwater Rush to King's Landing, and were forged together to form the Iron Throne. The news of this massive victory led the King In The North, who was marching south with his forces to fight the Targaryens at the time, to decide to bend the knee instead, effectively ending Aegon's conquest (with the exception of Dorne, which would hold out for another century).

Now, I don't think the battle in Episode 4 will effectively end Dany's conquest and signal the end of Cersei's reign. But it will undoubtedly be a decisive turning point in the war… and it could signal the end of a couple of fan-favorite characters, if Jaime and Bronn should find themselves in the literal line of Drogon's fire. Judging by the looks on their faces, fans should be very worried.

In typical Game Of Thrones fashion, the show is setting up a battle with beloved characters on both sides of the conflict. Who do you want to win? Pick your side before "The Spoils Of War" airs on Aug. 6.