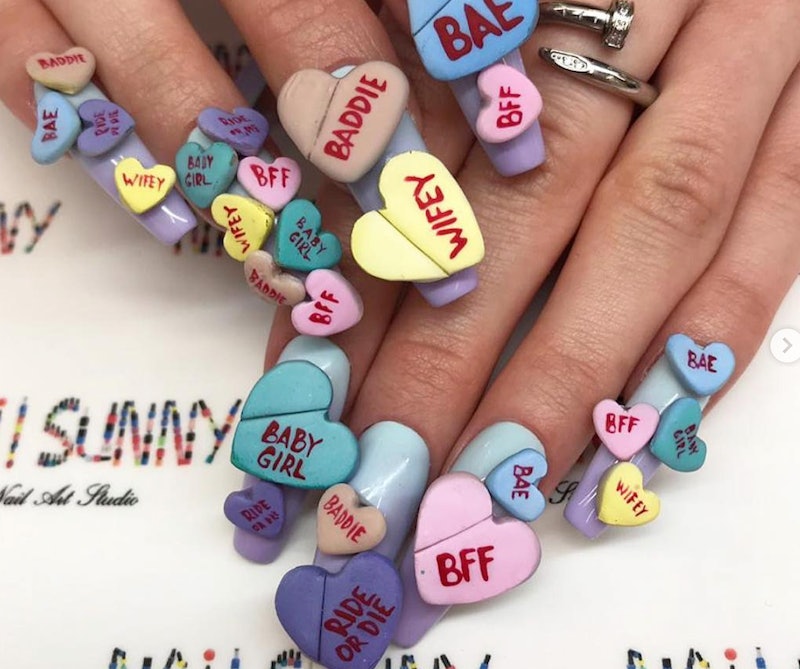 Cute, impractical, and totally extra. That's many of Nail Sunny's manicures. Nail Sunny created a Kim Kardashian Kimoji Hearts perfume-inspired manicure. Yes, it's cute and it's impractical. But you won't be able to stop looking at it. But to be fair, the nail art chain, which claims to be the largest in Russia and boasts over 2 million Instagram followers, does create gorgeous and perfectly functional and wearable manicures, too. They just capture attention with their unusual and oddly satisfying designs.

This manicure featured long, purple painted nails with conversation candy hearts fastened to the tips. The first thought is, "How does one write or, you know, change contact lenses with those?" The second is, "Oh, those are cute for V Day but you can't eat 'em."

But these weren't just a tribute to the infamous Valentine's Day candies. Not. Even. Close.

Rather, they paid particular homage to KKW Fragrance's latest drop. The nails boasted the names of KKW's Valentine's Day scents. KKW resurrected three popular scents from last year and added three new ones. They boast cheeky names like "Wifey," "Baby Girl," "Bae," "BFF," "Baddie," and "Ride or Die." Those scent names are painted on the hearts.

But as with most of their nail art, Nail Sunny took it a step further. The tech crafted the hearts to look exactly like the perfume bottles — complete with the line to indicate the removable cap.

I admit that I half-expected the Nail Sunny x Kimoji Hearts nail art to be fully functional and to include actual perfume that you can spritz inside the hearts.

Remember, this is the nail salon that has created a Starbucks coffee cup manicure you could drink out of, a MAC brush mani that applied product, cheese grater nails that worked, and Ramen noodles you could eat. So, yeah, every last detail is considered when it comes to a Nail Sunny mani.

Here is the source of inspo. If Kim or her social media team see this mani, they may be tempted to repost it, which could send Nail Sunny's visibility into the stratosphere. Now that the company is opening a salon in the Kardashian's home turf of Los Angeles, it could introduce Nail Sunny's gloriously extra manicures to a whole slew of new clients. That would be a smart biz move and ultimately why the salon made this mani.

The Nail Sunny tech used the same red lettering, too. The salon certainly has artisans in its ranks.

Instagram's feelings towards this nail art were generally pretty positive. That's likely because it was more wearable and not quite as "out there" as some of the manicures that Nail Sunny has created and posted in thee past. The salon often asks its followers "yes or no" and "yay or nay" regarding some of its creations. By comparison, this design was pretty tame.

The brand is expanding. Perhaps Kim and co. will pop by the L.A. location for a branded manicure once its open and operational. Regardless, throw Nail Sunny a follow and you are guaranteed to see some pretty exceptional and outrageous nail designs populate its feed.