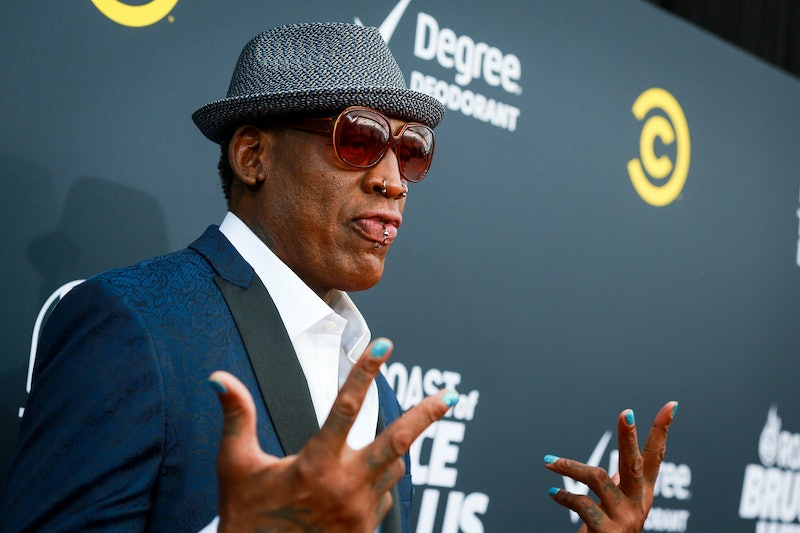 When Dennis Rodman was a quirky player for the Chicago Bulls in the 1990s, there were probably few people who imagined that he would later come to play a role in politics. Fast forward almost two decades, and Rodman evidently developed a fast friendship with Kim Jong Un when he visited North Korea for the first time in 2013. Now, the NBA Hall of Famer is calling himself President Donald Trump's "Ambassador of Goodwill" to North Korea. Dennis Rodman's letter to Trump about the Hanoi summit with Kim expressed his support in a way that sounded very much like Trump himself.

"I write today as your Ambassador of Goodwill to North Korea," Rodman began the statement, which he posted to Twitter on Wednesday. "As your staff is aware, based on our discussions, you have my continued and strong commitment to assisting in your talks with North Korea."

Rodman showed up in Singapore for Trump's first meeting with Kim in June, although the White House made it clear that he hadn't received an official invite. During the meeting, Rodman gave an emotional interview on CNN in which he sobbed on camera, calling it "a great day" and explaining how happy he was.

"My continued friendship with Chairman Kim remains strong — a friendship I encourage you to continue to use for our Nation's benefit," Rodman's letter continued. "While I will not be able to attend the Hanoi events, I plan on following up with you, your team and my friend, Chairman Kim."

Rodman's friendship with the leader of the world's last remaining Stalinist dictatorship began in 2013, with his first visit to the so-called Hermit Kingdom, according to ABC News.

"You have a friend for life," Rodman told Kim, an avid basketball fan, at the event — a move that human rights activists were not pleased with, according to ABC. Later, he even introduced Kim and his government to Trump, who Rodman had come to know through Trump's show Celebrity Apprentice. At a later meeting, he gave one of Kim's ministers a copy of The Art of the Deal.

Rodman's statement on the latest Trump-Kim meeting reflected his sense of optimism that the two leaders will be able to work out a deal for peace, despite the fact that their meeting didn't lead to any steps toward North Korea's nuclear disarmament. The Hanoi meeting ended on an even sourer note, with Trump cutting talks off early after North Korea insisted that it wouldn't fully denuclearize without a removal of sanctions, as The New York Times reported.

"We have a lot of work to do, but with your diverse team, amazing global contacts and willingness to think outside the box, we can have peace on the Korean peninsula," Rodman wrote. "We really can."

While Rodman signed off by saying, "Friends always," and wishing the two men good luck, the previous line most likely appealed the most to Trump.

"You are on the cusp of a big, beautiful deal," Rodman wrote in his letter to Trump. "One that would make you the front runner for the Nobel Peace Prize without question. You have my forever and forever support!"