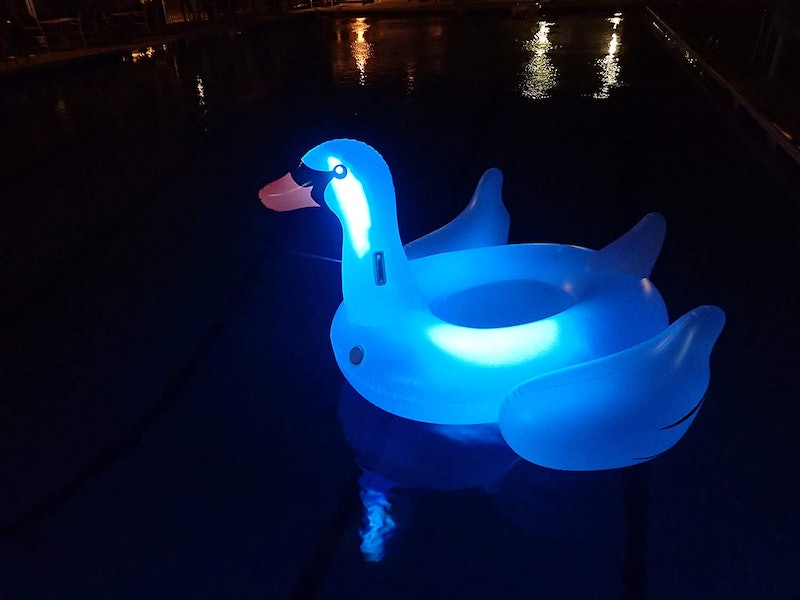 SPF, a show-stopping fire engine red one-piece, and a giant Light Up Swan Float from Swimline are summer necessities this year. This float changes the pool party game. Now they never need to end. With pool floats that serve a second purpose — as lamps — your party can make the day to night transition better than your year round black booties.

There's no question that a large pool float is a 2019 summer trend you need to get down with. But the Swimline Giant LED Light Up Swan Float, available on Amazon, just took the float game to the next level. This swan float wants to party. The giant float is big enough to fit two adults. And it doesn't just illuminate the water around it with a single bright color. The Giant LED Light Up Swan Float changes colors from pink to green to blue in a constant rotation. Basically, it brings the party to the pool.

The float can be purchased on Amazon and is available only to ship within the U.S. It retails for $53.90, and requires four AAA batteries that are not included with the purchase. If you're thinking of throwing the pool party event of the summer, don't plan one more thing without adding this float to your must-haves list. It is to the pool what a lavish floral display is to the dining room table: the centerpiece.

The reviews are in for the float that could belong in an Ibiza nightclub, and people are loving it. "I took this to a rave pool party. BIG HIT! Light can be seen everywhere and very unique compared to the standard swans and flamingos," one Amazon review reads. Some customers are even naming their floats. Which is amazing. "Lots of fun, named him Sam," another Amazon reviewer writes. The review continues, "he's great, keeps a watchful eye out on things when we're done playing." You're not just getting a pool float, you're getting a pool guard.

And it seems that many floats this summer are equipped with not just one purpose, but multiple. Ever been floating in the middle of the pool when you see a friend exit the screen door with a big bowl of chips and not want to slowly float to the poolside or ~take a dip~ to get to them? There is a simple resolution to this common irritant. The Motorized Pool Float that is also available on Amazon. Simply jet over to the shallow end to get a bite of chips and salsa before jetting back to the middle of the pool for more serene sun-soaking.

There is a very extensive array of floats you can add to your pool shed this summer. From floats that are more like private islands to cute, personal tubes modeled after Hello Kitty, "boring" won't be part of your pool party vocabulary.

Gather your necessities for summer, and don't forget this giant swan float. When you add the Giant Light Up LED Swan Float to the backyard, prepare to have your party — and life — light up.