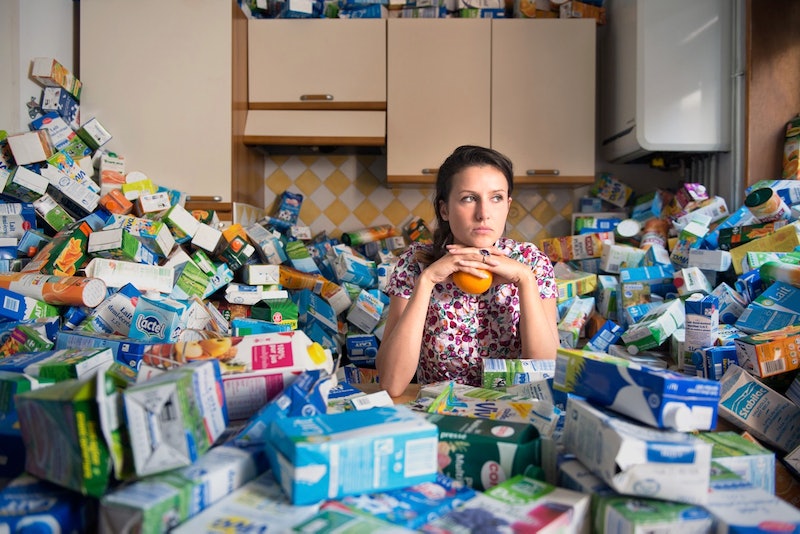 Although there’s been a rising awareness in recent years of the amount of garbage produced by humans just by living on this planet, most of us don’t often think about the amount of waste we’re responsible for on a day-to-day basis — or how it all adds up over time. But a photography project by one artist helps throw these considerations into the spotlight in a way that’s both shocking and necessary. The series #365 Unpacked by French photographer Antoine Repessé comprises photographs of people surrounded by four years of trash — and the powerful point the project makes is two-fold: First, it shows us in no uncertain terms exactly how much trash we generate just going about our everyday lives; and second, it reminds us that if we just take the time to recycle it, we can do a ton of good for the world.

“I started collecting all my recyclable waste in 2011,” Repessé, who is self-taught and based in Lille, tells Bustle in an email. “At the time, I was a photographer for a city. About 200 of my friends and colleagues helped me [collect] around 70 cubic meters of waste. Since then, I didn’t throw away any of [it] until I finished the project in 2015.” He used all that waste to create his photo series, with each picture sometimes taking him as long as 10 hours to make — for each one, he says, “I had to load a van, reach the place of the shooting, do the installation, light the scene, make the shooting, and then [take] everything back home.” The results are, in a word, striking.

According to a 2016 report by the LA Times, 1.3 billion tons of waste is produced globally each year — a number which is expected to rise to 4 billion by 2100. The United States is among the world’s leading generators of trash; in 2013, it produced 254 million tons of waste. What’s more, over half of the entire global population does not have access to regular garbage collection. We are, as the LA Times put it, in a trash crisis.

That’s what #365 Unpacked so sharply illustrates. Repess has actually been a collector for quite some time; prior to beginning his collection of recyclables, he used to collect things like signs and clocks.When it came to the waste he was collecting, however, he was “interested in how an object can lose its singularity when you don’t use it as something single,but as a part of something massive.” He explains, “If you use the same shape … many times, it becomes something very different from what it was before.”

Indeed, it’s this multiplication — the piling up of similar objects — that makes #365 Unpacked so powerful. Each image in the series pairs a person doing a common, everyday activity — reading a newspaper, painting their nails, eating dinner, using the restroom — with the kind of waste that the activity typically generates. The resulting duality within the images is striking: When you, say, read the newspaper every day, you tend to think of the paper itself as a single object. But, as Repessé points out,when you see many days’, weeks’, months’, or years’ worth of newspapers all gathered together, it’s a shocking reminder that your regular routine doesn’t just generate one paper a day; it generates thousands of papers over the course of your lifetime. As Repessé puts it, the images “reinforce the gap between the place of the model and the place the garbage really takes.”

The good news is that a lot of the waste we generate is recyclable. The bad news is that a lot of the time,people just don’t bother to recycle it. According to the Recycling Coalition of Utah, half of what Americans throw out each year could be recycled — but instead, it ends up in landfills. As Recyclebank points out, landfills these days aren’t as bad as they once were; they’re strictly regulated, preventing issues like groundwater pollution and fire hazards that were commonly associated with landfills as recently as the ‘80s. Even so, though, “all the stuff in landfills still represent a loss to the environment and the economy,” writes Recylebank. For example, paper might take up as much of 50 percent of all landfill space — but if that paper had been recycled and used to make new paper, valuable resources like trees and waters could have been saved instead of destroyed. Additionally, landfill decomposition produces methane, which in turn contributes to climate change.

Knowing this, the fact that Repessé’s photo series specifically uses recyclable materials is all the more notable. All that waste surrounding the people depicted in the photographs? It can be recycled. We can prevent it from going to landfills and causing many more problems if we just make the comparatively tiny effort to put them in the recycling bin instead.

Indeed, Repessé says he got “really involved” in the project, both physically (“because I lived with [it] for four years”) and intellectually (“because it represents a big contemporary issue”). He hopes, too, that the project will be able to change how people think about the waste they’re creating. “We’re often told about the quantity of waste we produce, but I think that the impact of a picture can be much [more] powerful than tons of words.” As such, his choice of sorting the garbage as he did was a deliberate one: “I tried to produce a perfect picture which got … disturbing, because what I’m talking about isn’t nice at all,” he tells Bustle.

Not sure where to begin? Here are a bunch of little, everyday ways you can help the environment. As Repessé puts it, “We can’t just ignore [it]. We’re responsible for this” — and it’s long past time we took the lead in dealing with it.

See more of Antoine Repessé's work at his website; you can also check out a video about the making of #365 Unpacked here.