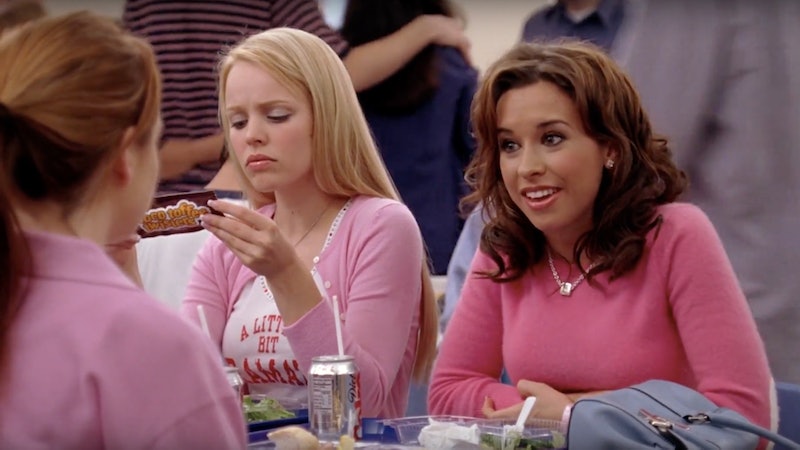 When it comes to the amount of ways that fans can celebrate and reference Mean Girls, the limit does not exist. And this new pop-up inspired by the pop culture-defining, early 2000s classic proves just that. A new Mean Girls-inspired pop-up restaurant is opening, and it's finally making "fetch" happen — just like Gretchen Wieners always wanted.

The temporary eatery, called Fetch, will be located in Santa Monica, as reported by The Hollywood Reporter, at a space formerly held by famed LA hotspot Joan's on Third, and open across three weekends in November, on Nov. 9-10, Nov. 16-17, and Nov. 23-24. Tickets for the pop-up cost $45 for a 90-minute time slot and include a three-course meal. And yes, there will be cheese fries.

Everything in the restaurant will be influenced by the iconic film — including the dress code. The suggested attire for guests is everything pink, even though the pop-up won't be open on Wednesdays. Fetch will reportedly be decorated just like the famed school cafeteria, meaning you may have a chance to sit (with us) at the infamous Plastics table. The Mean Girls soundtrack will be blasting through the speakers, and the restaurant will even include nods to Halloween and Christmas, both of which are celebrated in the movie with Chris Eisel's Halloween party and the Plastics' infamous "Jingle Bell Rock" performance.

The food and cocktail menus are still being developed, but from what has been revealed so far, it's obvious that pink isn't only for Wednesdays anymore. According to THR, the dishes will include a Just Stab Caesar salad with pink dressing, Coach's Hot Dog, a Bitch Burger with pink coleslaw, and Whatever Cheese Fries with pink cheese sauce. All that's missing is a buttered muffin.

Now, you might be asking, when do tickets go on sale for this potentially life-changing experience? As Cady famously said to Aaron Samuels, "It's October 3rd." The day is now famously heralded as Mean Girls Day on social media every year, solely because of the now-legendary moment between the two crushes, and buying tickets to the pop-up is just the newest way to celebrate it this year.

The Mean Girls-inspired eatery is the latest in a long line of nostalgic pop-up experiences based on our favorite movies and TV shows, including the Friends 25th Anniversary pop-up in New York and a Stranger Things-themed ice cream shop in Burbank. Sarelyn Radecke, founder and creative director of Rixton Productions, the company behind the pop-up, told THR that she decided to mark the film's 15th anniversary with this interactive experience to bring "everyone back to the way we felt when we were watching the movie for the first time."

"Basically everything will be a photo op," she said. "Mean Girls is one of those movies that I think every girl who grew up in the '90s and early 2000s quotes at least probably five to 10 times per year. So it's looking at those moments and saying, 'What can we capture for this experience?'"

The amount of references they can take advantage of are endless, which only assures that Fetch is truly going to be so fetch.

More like this
Amanda Seyfried Says She Felt Pressured To Shoot Nude Scenes At 19 Years Old
By Jake Viswanath
Netflix Reveals First Look At Wednesday In The 'Addams Family' Spinoff Series
By Bustle Editors
Jennifer Coolidge Just Said The Most Controversial Thing About Legally Blonde’s “Bend & Snap”
By Maxine Harrison
Before 'Bullet Train,' Revisit These Brad Pitt 'Fight Club' Premiere Photos From 1999
By Grace Wehniainen
Get Even More From Bustle — Sign Up For The Newsletter