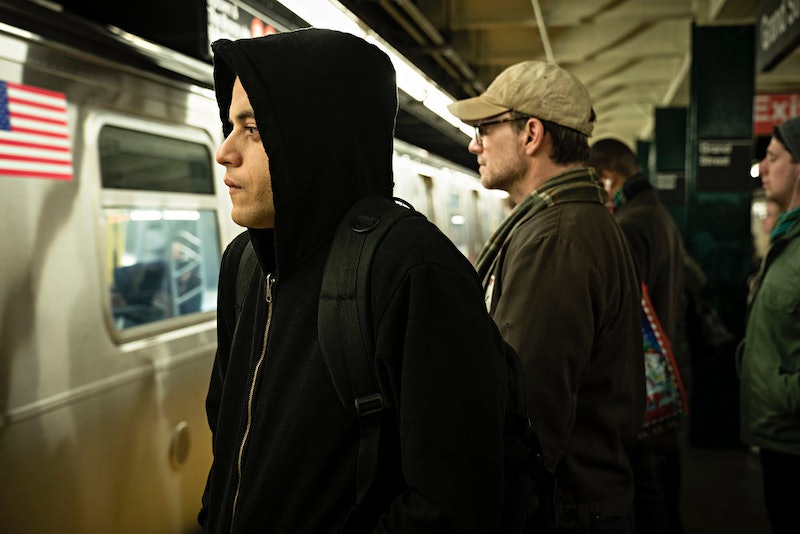 In today's crowded TV landscape, a show that last aired in December 2017 is basically a long-forgotten relic. Game Of Thrones' final season already feels like ancient history, and it only aired five months ago. Which is why, before settling in to watch the Season 4 premiere on Sunday night, you'll probably need a recap of Mr. Robot Season 3.

If you stretch your memory far enough, you may remember that Season 1 — which premiered in the bygone era of 2015 — introduced us to Elliot, a loner hacker recruited by an anarchist hacker collective known as fsociety to help bring down the largest corporation in the world, E Corp (also known as Evil Corp), and ignite a global economic revolution. By the end of that season, it was revealed that fsociety leader Mr. Robot and Elliot were actually the same person (and that Mr. Robot is modeled after Elliot's dead father, who was killed when infected by toxic chemicals at Evil Corp's shady Washington Township Plant).

Season 2 dealt largely with the psychological aftermath of that revelation for Elliot, as well as the economic aftermath of the hack — referred to as the 5/9 attacks. While Elliot grappled with Mr. Robot in prison, his sister Darlene grappled with mounting pressure from both Evil Corp and the FBI, who were both closing in on the members of fsociety. In the end, Elliot learned that there was a Stage 2 to the 5/9 hack, one that would result in the deaths of several innocent people; in an attempt to stop it, Elliot wound up shot by his enemy/ally Tyrell Wellick.

And things only got more complicated in Season 3…

After shooting Elliot to prevent him from stopping Stage 2, Tyrell took him to used car salesman and Dark Army henchman Irving to save his life. Upon recuperating, Elliot asked Angela to get him a job at Evil Corp — ostensibly to help the Dark Army, but really so he could foil the group's impending attack. He redistributed the company's paper records to buildings all over the country so the Dark Army couldn't blow them up. When Angela realized what Elliot was doing, she got Evil Corp CEO Philip Price to fire Elliot, and carried out the Dark Army's instructions instead.

It turns out that the data Angela smuggled out for the Dark Army was the location of all the buildings Elliot shipped the paper records to; the Dark Army proceeds to blow them all up, rather than the one initial target, resulting in exponentially more deaths than would have occurred had Elliot not interfered. Angela tried to rationalize her actions, claiming that if Whiterose's master plan is successful, none of those victims will have died. In the end, a spiraling and delusional Angela is told by Philip Price that he is her real father.

Meanwhile, Elliot's sister found herself caught between the Dark Army and the FBI after Agent Dominique DiPierro deduced her involvement in Season 2. Eventually, Darlene learned that murdered fsociety member Trenton sent Elliot an email before he died, revealing that their colleague Romero (also murdered) had saved the key to undo the 5/9 hack… only they key was in the FBI's custody. Darlene seduced Dom and attempted to steal her badge in order to gain access to the Bureau and retrieve the key, but she was caught in the act by the agent.

Throughout Season 3, Dom found her investigation into fsociety and the Dark Army stymied by the fact that her boss, Agent Santiago, was actually working for the Dark Army. After discovering his duplicity, both Dom and Darlene were kidnapped by Santiago and taken to a barn where they were met by Dark Army agents, including Irving. Irving killed Santiago for blowing his cover and demanded that Dom take his place as the Dark Army's mole inside the FBI.

After helping plan Stage 2 with Elliot's alter ego Mr. Robot, Tyrell remained the Dark Army's puppet, supervised by the menacing Irving. Irving manipulated Tyrell by promising he would be able to reunite with his wife Joanna and their newborn baby, despite knowing that Joanna had been murdered earlier in the season. When Tyrell attempted to go to the FBI, Santiago informed him of Joanna's death and threatened to hurt Tyrell's son if he goes against the Dark Army. He was then installed as CTO of Evil Corp by Philip Price, who demanded Tyrell's total obedience.

The time-obsessed leader of the Dark Army was determined to have the contents of the Washington Township Plant relocated to the Congo, which Philip Price helped China annex as part of a deal with Minister Zhang (Whiterose's public persona). Elliot and Mr. Robot finally teamed up with each other after realizing everything they've done has been manipulated by Whiterose to further her own mysterious agenda. They evaded assassination by the Dark Army by helping Whiterose get the plant moved to the Congo, but remain determined to stop her in Season 4 — even if it's still unclear exactly what she wants.

Fortunately, it turns out that Romero's data in FBI custody isn't the only key out there that can undo the hack. Unbeknownst to Elliot, Mr. Robot had also burned a copy of the key onto a CD on the night of a hack, embedded in a picture of young Elliot and his father.

What is Whiterose's ultimate goal? Does it involve time travel? Will Elliot finally manage to undo 5/9? Who will escape with their lives? Find out when Season 4 premieres on Sunday, Oct. 6.