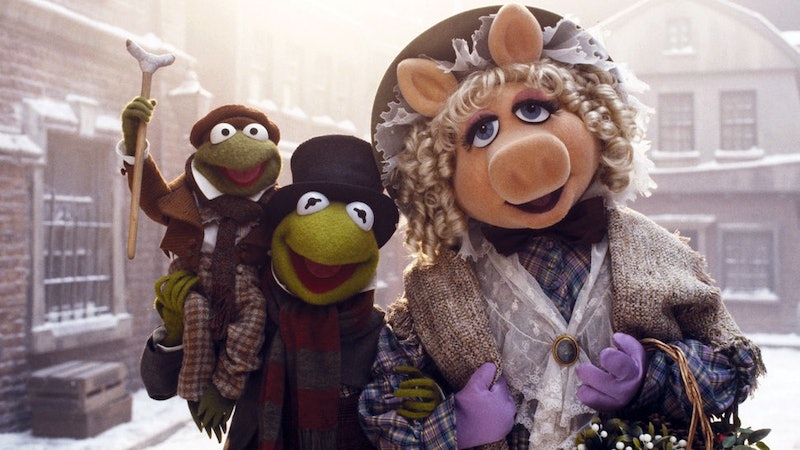 Modern holiday films like Love, Actually and The Holiday may get all the attention these days, but when it comes to capturing the magic of Christmas no movie does it better than The Muppet Christmas Carol, starring Michael Caine as the miserable old miser, Ebenezer Scrooge, who comes to learn the true meaning of Christmas after being visited by ghosts. (You know, typical yuletide stuff.) Yes, there are a lot of reasons to love this classic piece of cinema, however, there's one thing you probably never noticed in The Muppet Christmas Carol that'll totally change your viewing experience moving forward, especially when it comes to that final, heartwarming scene.

After Scrooge's visit from the Ghost of Christmas Yet To Come, he finds himself back in his bedroom on Christmas morning, alive and well and with a new lease on life. To help prove that he's a changed man who has fully embraced the true essence of Christmas, he runs into Bunsen and Beaker, who had approached him the previous day about donating to the poor and homeless. He had rejected them right on the spot, but was now ready to contribute a generous amount to their cause. (We don't actually hear how much it is, but Bunsen's reaction implies it's a significant amount.) As a way to say thank you, Beaker gifts Scrooge with a red scarf he had been wearing.

It's a heartwarming moment and Scrooge's mixture of shock and gratitude to this small but touching gesture never fails to hit you right in the feels. However, there's one small detail about this interaction that you may have never noticed before, but now won't be able to unsee.

Given that Beaker is, in fact, a muppet, the scarf he is wearing is definitely muppet-sized, in order to still be proportionate with the rest of his ensemble. But shortly after Scrooge puts on the scarf, the garment appears to have nearly doubled in size, so that it properly fits him, an adult human. It's a blink-and-you'll-miss-it moment, but you can see how much smaller the scarf is when Scrooge first puts it on to when he sings that final song, "Thankful Heart," and appears to be wearing a red scarf that is noticeably longer in length.

It's a very small detail, to be sure, and one that can easily go unnoticed if you're not paying close attention or simply too distracted by the joyous song Scrooge is singing. But it's still an interesting thing to be aware of moving forward that'll only add another magical element to an already magical movie.

Sprocket from Fraggle Rock makes multiple cameos throughout the film, which adds a fun crossover effect to the film.

So in case you have yet to rewatch this muppets holiday classic this year, be sure to keep a lookout for that growing red scarf (and Sprocket!) to help add another level of merriment to the whole ordeal. It's just one more reason to love this Charles Dickens adaptation.