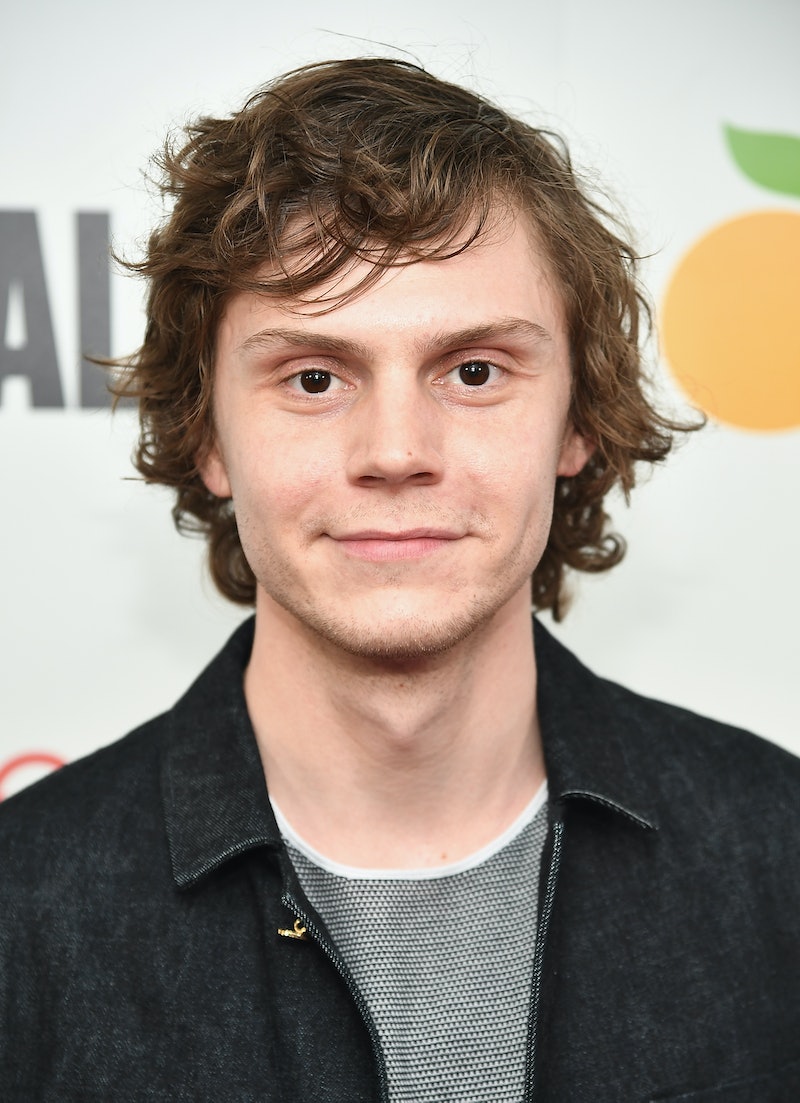 Ever since AHS began its rollout of announcements re: who's playing who on the show's upcoming season, fans have been buzzing with questions. But a handful of just-released new AHS: Apocalypse photos revealed a major clue about Evan Peters' characters, so hopefully that'll take care of some of those questions. In this case, the clue is two-fold: According to an FX press release, he's slated to play two different characters, not three; and only one of them is a character fans will recognize from past seasons.

Those who've been following the AHS-related updates in the news these last couple of weeks probably know already that Apocalypse is basically a crossover between Murder House and Coven. Given its newfangled parameters, fans have been eager to find out which of their Murder House and Coven favorites would be returning along with the series when Apocalypse premieres on Sept. 12.

Peters' involvement in AHS: Apocalypse has been confirmed for a while now, but exactly which roles he'd be reprising remained a little fuzzy. That said, FX's new press release does its part to clear up any lingering confusion on that front. Accompanying a close-up shot of Peters looking particularly polished in an electric purple suit, the press release credits him as playing two different roles: Mr. Gallant and Tate Langdon.

Audiences who've been watching AHS since the beginning will probably remember Tate Langdon, Peters' character from the show's first season. The character wasn't a villain, exactly. But Tate still gained some rightful notoriety within the AHS universe, since he basically doomed the entire Harmon family (his girlfriend included) to an eternity spent in Murder House limbo. And, donning that extraordinarily creepy latex body suit, Tate managed to catalyze the eventual destruction of all humankind, too.

That was way back in Season 1. But it sounds like the whole "fall of humanity as we know it" issue will take center stage in Apocalypse. (Or, as Sarah Paulson's character ominously put it in one of the new season's exceedingly creeper teaser videos, "the end of days.") The destruction comes mostly at the hand's of Tate's son, Michael Langdon, who also happens to be the "Anti-Christ" destined to destroy the planet entirely. And while all of that sounds truly nightmarish, it makes sense that such a major plot point would call for Tate's ghostly return.

So it wasn't too much of a surprise when AHS creator Ryan Murphy confirmed via Instagram that Peters would be reprising his Murder House role come Sept. 12. "Tate. Happy to be home," Murphy wrote, captioning an Instagram photo that saw Peters back on the Murder House set, channeling some serious Tate Langdon vibes.

In light of Murphy's announcement, some people were wondering if — much like Paulson, who's set to play both her Murder House and Coven characters, in addition to a new one, during Apocalypse — Peters might be reprising his Coven character in the upcoming season as well. But judging by FX's new cast photos, it looks like AHS: Coven's Kyle Spencer will not be returning for Apocalypse. (Of course, just because FX's press release credited Peters with two roles doesn't necessarily mean they're definitely the only ones Peters will play during Apocalypse. AHS is known for its curveballs, after all. But don't be surprised if Kyle is a no-show come Season 8.)

Instead, audiences will see Peters explore the role of "Mr. Gallant," an entirely new character who, at this point, remains a bit of a mystery. During an AHS pre-Emmy voting event earlier this year, Murphy teased fans will some vague tidbits about Peters' Season 8 character, according to Deadline. The series' creator didn't reveal too much about the role, except that Peters will play a hairstylist and that it will be a "comedic part." And, per Deadline's report, Joan Collins' AHS: Apocalypse character is apparently his character's grandmother.

As of right now, it hasn't technically been confirmed that Peters' ultra-polished Mr. Gallant character is indeed the "comedic hairstylist" Murphy was talking about. But Mr. Gallant's silver pixie cut in FX's new press photo (not to mention those swanky hexagonal shades) does seem to suggest that that is indeed the case.

Either way, who else is excited to finally meet this elusive Mr. Gallant character? What with Tate's penchant for wreaking havoc and all, seeing Peters play a comedic role on AHS: Apocalypse sounds like a welcome change of pace. Plus, it would probably be pretty exciting for audiences to watch Peters shine in a role that doesn't involve quite as much doom. Of course, knowing AHS, there'll probably be more than enough doom to go around.