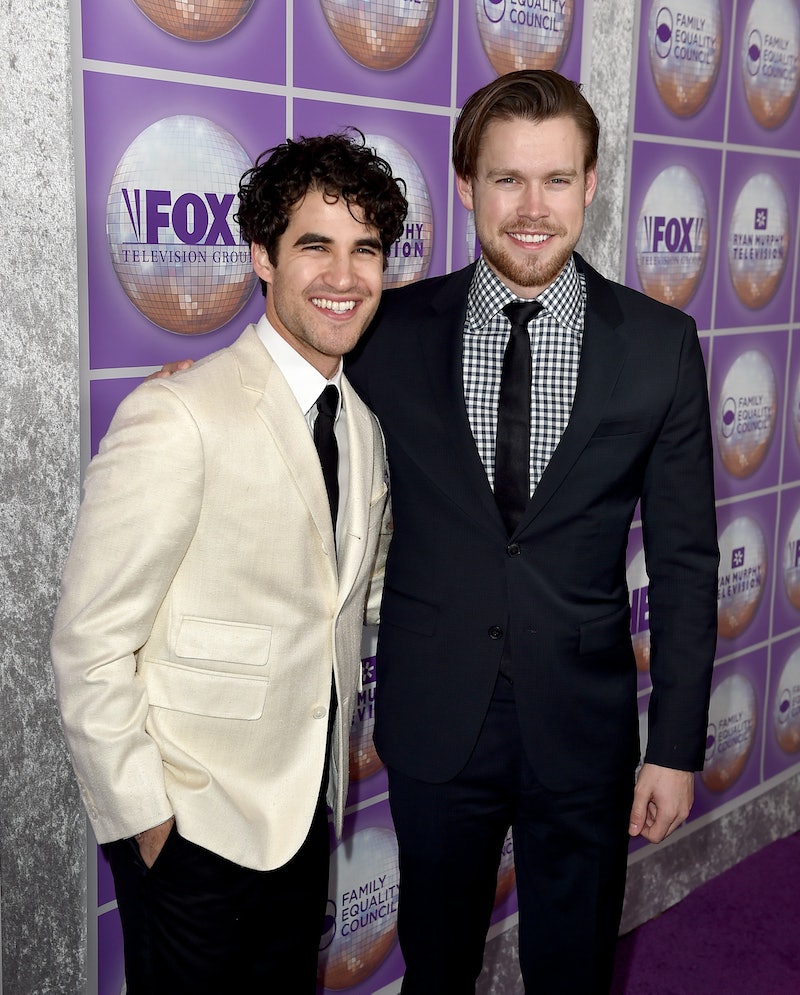 It's a moment Glee fans have been waiting for since the show ended in 2015. Several Glee cast members reunited over the weekend, and yes, there was singing involved. On Friday, June 7 co-stars including Darren Criss, Amber Riley, Kevin McHale, Jenna Ushkowitz, Dianna Agron, Chord Overstreet, and Harry Shum Jr. hit up piano bar Tramp Stamp Granny's, which is co-owned by Criss and his new wife Mia Swier, per Just Jared.

A few of the cast members documented the reunion on Instagram. McHale posted both blurry and clear versions of a group photo with the caption, "Reality vs expectations." Ushkowitz posted the clear version with the simple caption, "It happened." Agron opted for a single black heart next to her post of the photo, and Riley shared the blurred version on 'gram with the caption, "Figure it out #10yearsandthisisthebestwecoulddo," alongside laughing emojis.

Perhaps Modern Family star Jesse Tyler Ferguson summed up the Glee fandom's excitement best when he commented on McHale's post, "The sound you heard was a million Generation Xers fainting and hitting the floor." Why yes, that does seem to be a common feeling among avid fans of the series. But if a meeting between some of McKinley High's finest wasn't enough to send your teenage heart soaring, the fact that karaoke was involved just might.

The reunited cast members took to Instagram Stories throughout the iconic evening to show off their karaoke skills. Scrolling through any of the star's Stories felt like re-living a nostalgic episode of Glee. Per Just Jared, some of the songs performed included Riley singing Aretha Franklin's "Natural Woman" and Ushkowitz beginning a version of "Shallow" from A Star Is Born, before several other cast members joined in. So, basically, it was a 2019 reboot of the legendary series.

While no one is quite sure what spurred on the reunion or how the invites were sent (there has to be a group chat, right?), there are definitely some other cast mates we'd love to see at this reunion. Heather Morris, who played Brittany on the show, even hilariously commented, "So p*ssed," on Ushkowitz's post, perhaps referring to not being in the area during the reunion.

But this is a cast that has had several mini-reunions over the years. Whenever a former New Directions member gets married, for instance, Lea Michele's March 2019 wedding, it usually inspires a cast hangout. Some of the reunions have come for professional reasons. Criss and Michele went on tour together last year singing everything from "Falling Slowly" to "Shallow." In March, Riley, Shum Jr., and the LadyGang's Becca Tobin battled costars McHale, Ushkowitz and Morris on an episode of Drop the Mic.

Fans will take any reason for the cast to reunite. Even famous friends like John Stamos, who recurred on Season 2 of Glee, commented on Agron's Instagram post, "Love those faces!!"

So, with excitement over Glee reunions this high on the Internet, could a reboot or concert be on the horizon for the show's 10-year anniversary? It's an idea die-hard gleeks will never stop believing in.