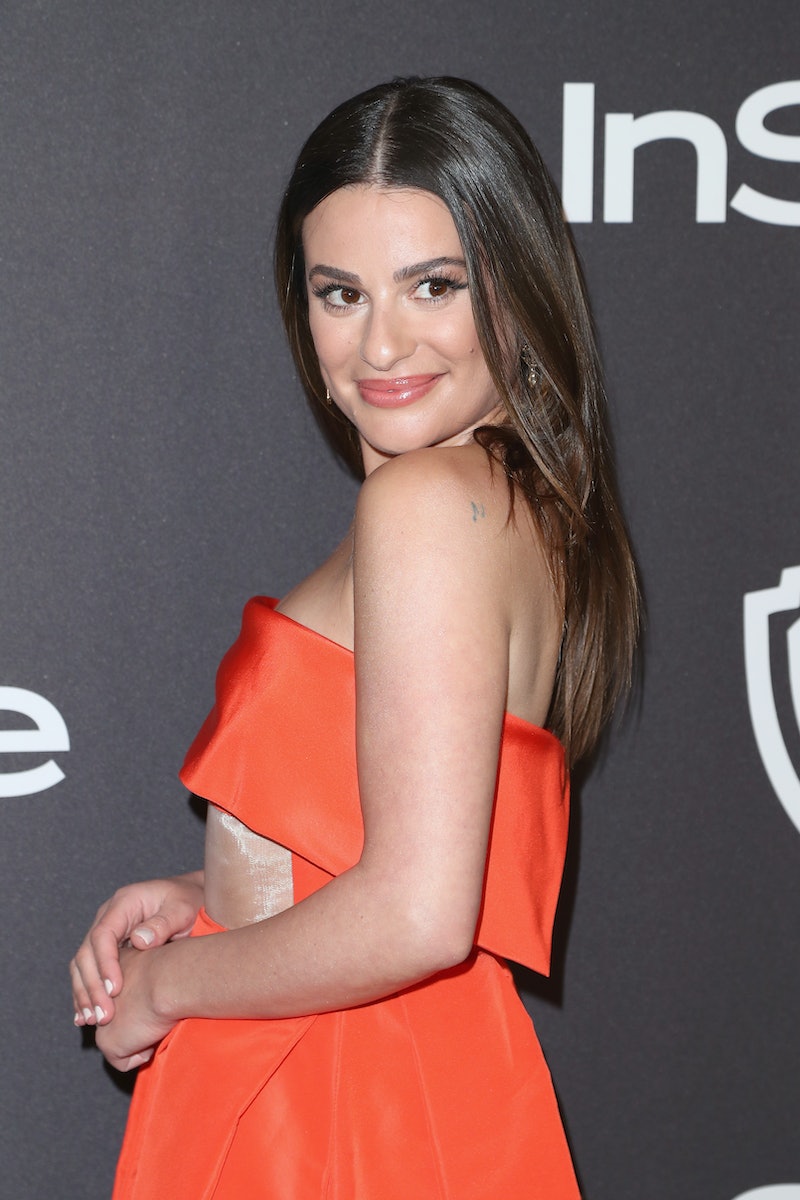 Lea Michele is a married woman! The Glee actor married AYR clothing company president Zandy Reich in a Napa, California ceremony on Saturday, Mar. 9, per People. Lea Michele got married surrounded by family, friends, and a few familiar famous faces. According to People, attendees included her former Glee co-stars Darren Criss and Becca Tobin as well as her Scream Queens castmate Emma Roberts. Us Weekly reported that Glee co-creator Ryan Murphy officiated the wedding. Michele and Reich got engaged in April 2018 after about two years of dating. The actor announced the engagement on Instagram with a snap of her massive ring and the caption, "Yes" alongside a ring emoji. The pair was first romantically linked in July 2017 after being longtime friends.

People was also the first to share a photo of the newly married couple on their big day. Michele is seen wearing a strapless gown, long veil, and classic up-do. Reich sports a navy blue suit and bow tie. In a statement to the publication, the couple said this about their nuptials: "We are so excited to be married and grateful to be surrounded by our friends and family. And most of all, we're so happy to spend the rest of our lives together."

Since the beachside engagement, Michele has documented her journey to the altar via Instagram. In May 2018, just a few weeks after her proposal, Michele declared Spring Awakening and Glee co-star Jonathan Groff her maid of honor. Last month, the bride spent time with other friends in Hawaii, including Roberts and actors Jamie-Lynn Sigler and JoAnna Garcia Swisher, for her bachelorette party. Reich and Michele's engagement party also featured some notable guests such as Hilary Duff, Ashley Tisdale, and Billie Lourd.

This isn't the first Glee-crossover wedding event. Tobin's December 2016 ceremony was officiated by Jane Lynch and boasted guests including Kevin McHale and Jenna Ushkowitz. Several cast members came together for Heather Morris' special day, too. A Gleeful wedding season is apparently upon us, as just last month Darren Criss married Mia Swier in a Feb. 16, New Orleans ceremony, which Michele also attended. No word on if Criss and Michele performed any of their tour's set list (including a well-documented rendition of "Shallow") at the reception, though a lifelong Gleek can dream.

Michele's wedding is the ultimate happy ending for the performer, whose road to love wasn't always easy. But even back in August 2017, shortly after her relationship with Reich was confirmed, she took to the 'gram to express love for her now-husband, captioning a photo of the two looking out at the ocean with:

It turns out "32" will also be one for the books after the couple's dreamy wedding. From singing through high school hallways to walking down the aisle, fans will always support happiness for Lea Michele and, now, her new marriage, too.