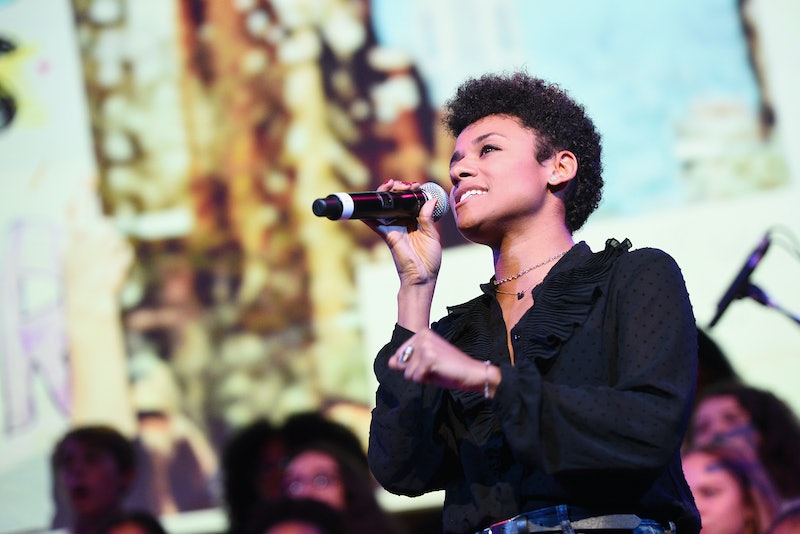 Anita's getting her kicks tonight. A new West Side Story photo of Ariana DeBose as Anita hit the web on July 13, and she's posing — where else — but on one of the hit musical's iconic fire escapes. "Oye! Here she is y’all- in all her glowing glory☀️ #FirstLook #Anita," DeBose posted on Instagram, along with the official shot of her character in Steven Spielberg's December 18, 2020 big screen adaptation of the 1957 musical about rival gangs in 1950s New York. The So You Think You Can Dance alum also included the hashtags #puertoriqueña #boricua #westsidestory with the image, first shared by Spielberg's Amblin film and television production company.

Fans of both the Broadway musical and 1961 movie know well how tight Anita is with protagonist Maria (played in the 2020 version by Rachel Zegler). Judging by Zegler's Twitter reaction to the photo, the same may be true for her and DeBose off screen as well. "Have you met my good friend anita? 😍😍😍😍😍😍😍😍😍😍😍😍," Zegler tweeted after Amblin shared the pic. In a follow-up reply, she gushed that "watching ariana is like a masterclass in performance. you guys aren’t ready!!!!! i cry."

Of course, PEGOT winner Rita Moreno portrayed Anita in the 1961 film adaptation and won a Best Supporting Actress Academy Award for the role. Much to fans' delights, Moreno will be in the new West Side Story as well. This time around, however, she'll play corner store owner Valentina in a "reconceived and expanded version" of Ned Glass' Doc from the 1961 film. (Moreno will also serve as an executive producer on the project.)

“Never in my wildest dreams did I see myself revisiting this seminal work,” Moreno said in a statement to Deadline last year. “And to be asked by Steven Spielberg to participate is simply thrilling! Then to work together with the brilliant playwright, Tony Kushner – what a glorious stew! I am tingling!”

As Spielberg added to Deadline in a separate statement: "From our earliest discussions, we wanted to include Rita Moreno in our production. Her Anita is one of the greatest musical performances ever filmed, and a personal favorite of mine. We created an original role for her."

When DeBose's casting was announced in January, One Day at a Time star also used social media to sing the young actor's praises. "So proud to pass the baton to our new Anita – the wonderfully talented @ArianaDeBose," Moreno tweeted at the time. "This role means the world to me, and I cannot wait to dance with you on set!"

For DeBose's part, Moreno's Twitter message seemed to mean the world to her as well. She replied: "I’m truly speechless...I am honored and excited to work and learn from someone I have admired for so long❤️💃🏽✨ I simply cannot wait!"

West Side Story may not hit theaters for more than a year, but the first photo of Anita is surely just the beginning of more exciting teases to come.

More like this
The Jonas Brothers' New Album Has A Very Meta Name
By Alyssa Lapid
The Spice Girls Are Set To Reunite At King Charles III’s Coronation
By Sam Ramsden
Cruz Beckham Teased New Music With An Adorable Nod To Mom Victoria Beckham
By Stephanie Topacio Long
James Cameron May Come To Regret His 'Titanic' Door Experiment
By Stephanie Topacio Long
Get Even More From Bustle — Sign Up For The Newsletter
From hair trends to relationship advice, our daily newsletter has everything you need to sound like a person who’s on TikTok, even if you aren’t.