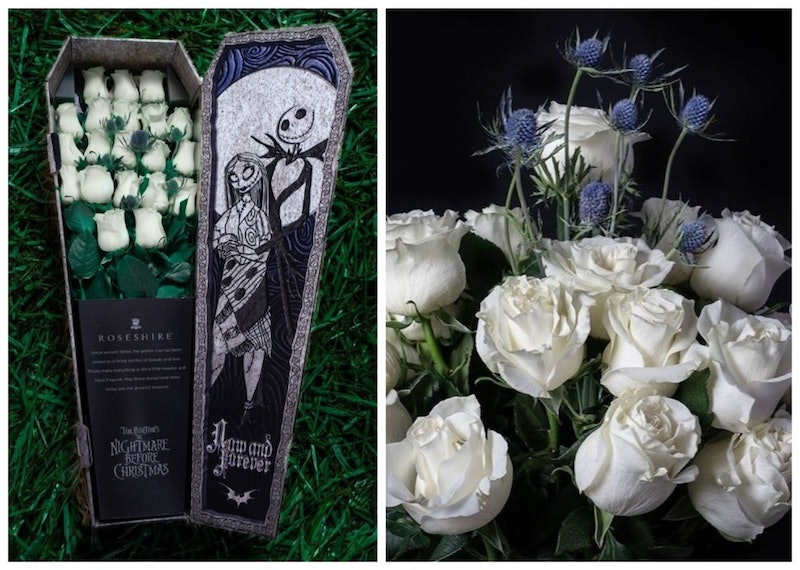 If the idea of a dozen red roses arranged in a bland but tasteful glass vase and accompanied by a sprig of baby’s breath doesn’t quite do it for you, good news: You can get a Nightmare Before Christmas rose bouquet instead. Made by upscale flower arrangement and delivery company Roseshire, the bouquet features not baby’s breath, but a thistle — and even better, it’s presented in not in a bland but tasteful glass vase, but in a box that looks like an actual coffin.

Roseshire’s schtick is that getting a bouquet from them is “an experience, not an arrangement.” Originally launched in 2015, the company takes the whole flower delivery thing to the next level: When you receive a Roseshire bouquet, you don’t just get a random delivery person showing up at your door with vase in hand; you get a carefully wrapped package that presents a “‘big reveal’ when opened,” per the company’s website. If there’s a message to go with your bouquet, you don’t just get a hurriedly-scrawled note card stuck on one of those plastic stick things and jammed in the vase; you get a message printed on beautiful stationary folded into a linen envelope and sealed by hand with wax. The bouquets themselves, of course, are hand-assembled, with a wide variety of options available for the color of your roses.

The first Roseshire x Disney collaboration — a holiday-themed Mickey Mouse collection — launched in 2016, with several more following shortly thereafter. New Disney-centric bouquets have continued to arrive with some regularity in the years since — but what many (by which I mean me) might consider to be the crown jewel only just arrived a year ago: The Nightmare Before Christmas bouquet originally debuted in the fall of 2018, just in time for the Halloween season.

And it is spectacular.

All of Roseshire’s bouquets are presented in gorgeously-designed boxes, and the Nightmare Before Christmas arrangement is no different. Adorned with Jack Skellington on the front and Jack and Sally on the inside, the illustrations are all done in the distinctive style that makes the film itself so visually arresting; the words “Now and forever” are also scrawled across the inside of the lid, along with the silhouette of a bat for some spooky pizzazz.

Where the box really shines, though, is its shape: Unlike the rectangular boxes in which most Roseshire bouquets arrive, the Nightmare Before Christmas box is shaped like a tiny coffin. You heard me: It’s a coffin filled not with a dead or undead creature, but with 20 beautiful roses. Believe you me when I say that this juxtaposition fills my dark little heart with sheer, unbridled joy.

Speaking of the roses, you’ve got some options when it comes to color. You can fill the coffin box with either 20 red roses or 20 white ones; additionally, a thistle — not unlike the one that factors prominently in The Nightmare Before Christmas itself — tucked into the bouquet adds the finishing touch. The red roses are paired with a green thistle, while the white roses get a pop of color from a purple thistle. The stationary on which your message is written, meanwhile, features an image of Sally holding a thistle, taken from the scene in which she sees a vision of how Jack’s Christmas celebration will turn out.

The downside to this whole thing, though, is the fact that Roseshire bouquets are pretty pricey: The smallest boxes start at $59, and can go up to $255. Most of the collections fall in the $175 to $200 range, which is roughly where the Nightmare box fits: It’ll set you back $205. Shipping adds on an additional fee, as well — around $35, although that can vary depending on where you’re shipping your roses to and whether you’re aiming for a weekday or weekend delivery.

Then again, there is a lot more going on with Roseshire’s arrangements than there is with your typical bouquet of two dozen roses — and there’s no denying how spectacular the whole presentation is. So, hey, if you’ve got the disposable income available to shell out for a gift like this, go for it.

If The Nightmare Before Christmas isn’t your thing, by the way, there are loads of other options available from Roseshire. On the Disney end of things, there are lots of arrangements themed after the Disney Renaissance, from Beauty and the Beast to The Little Mermaid; what’s more, there’s even a Disney Villains box that looks wickedly amazing. And if you’re not into Disney, Roseshire’s got you covered there, as well. Head on over to their website to find out more.

Now if you'll excuse me, I, uh, have a flower delivery to arrange.

More like this
Netflix Reveals First Look At Wednesday In The 'Addams Family' Spinoff Series
By Bustle Editors
Why TikTok Is Obsessed With Caesar Salads Right Now
By Alexis Morillo
Behind The Hilarity Of The "POV: You Walk Into My Room" TikTok Trend
By Lexi Inks
TikTok's Butter Board Might Be The New Cheese Plate
By Emma Carey
Get Even More From Bustle — Sign Up For The Newsletter