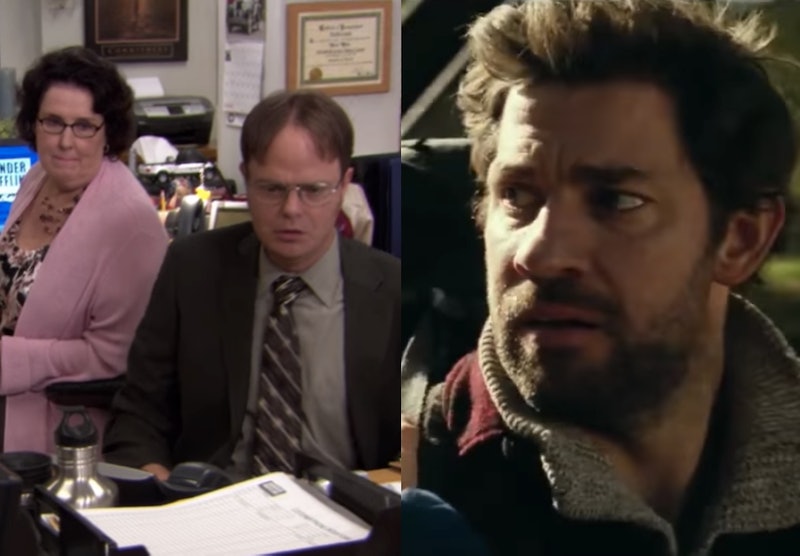 The fictional offices of Dunder Mifflin are known to be awkward — and at times, uncomfortable — but in this mash-up of The Office and A Quiet Place, they just got really, really creepy. In a new parody trailer on YouTube, Media Muse fused scenes from the NBC comedy and clips from the show's former star John Krasinski's new horror flick into A Dwight Place.

The two-minute video uses footage from "Trivia," an episode from The Office's eighth season, depicting a 20-minute period of silence — the longest in office history — that ends when Kevin, played by Brian Baumgartner, opens a candy bar. Backed by the film's ominous score and intercut with scenes of a terrified-looking Krasinski running for his life, a plastic wrapper has never sounded so sinister.

Diehard fans will also remember Dwight's oddball cousin Mose — played by Rainn Wilson and Michael Schur, respectively — who can be seen wearing a henley embossed with the word "fear" in red letters and sitting in an outhouse with a squeaky swinging door, while Krasinski's on-screen children in A Quiet Place wave their flashlights about, searching for the source of the noise.

This trailer manages to make a scene of darting through a wood shed seem right at home next to Krasinski and his onscreen family running from monsters.

Krasinski's Office character Jim Halpert is beloved by fans, as he and his onscreen love interest Pam, played by Jenna Fisher, are a true television OTP. In his new movie, however — which he also directed and co-wrote — Krasinski stars alongside real-life wife Emily Blunt.

The two tied the knot back in 2010 after meeting through a mutual friend, but this marks their first professional venture together. In the film, the pair play parents to two children, and they all must stay quiet to protect themselves from monsters that hunt by sound.

After Blunt read the screenplay, she told Krasinski that he had to let her play the female lead. "It is the greatest compliment of my entire career," he told Entertainment Weekly earlier this month.

Meanwhile, Blunt said that being married helped inform their performances when it came time to shoot. "We realized that as a married couple, we could serve the film more, actually," she told Bustle in March, stating they were able to "bring so much of our memory bank into this experience."

The movie is Krasinski's third as a director, but arguably his most successful, and has been met with both critical acclaim and massive box-office success, nabbing the the record for the best opening weekend of an original horror film ever, raking in $50 million domestically, which is $20 million more than predicted.

Previously, Krasinksi, better known for his comedic work, directed Brief Interviews with Hideous Men in 2009, which was based on a series of short stories by David Foster Wallace; 2016 dramedy, The Hollars; and a few episodes of The Office. He had never worked on a horror film, but forgot about the genre and focused on the story.

"When I got the script it was definitely scary and all those things, but the thing I bonded to most in the original draft was this idea of family," he told Variety.

A Quiet Place is certainly a creative departure from Krasinski's days on The Office, even if some fans think they may have spotted a reference to the show in the film. And although the trailer for A Dwight Place isn't real, it does seem that Krasinski's talents are well suited for many different kinds of projects. If this preview is any indication, it would make a great full-length.