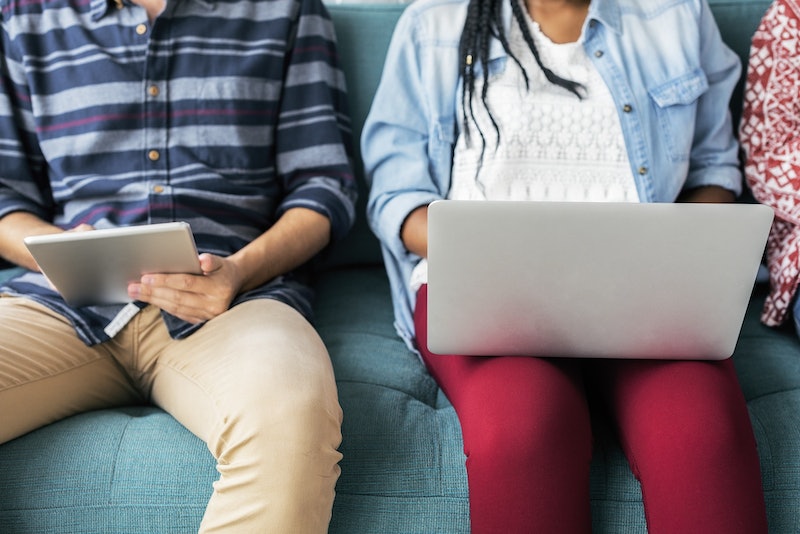 Gender inequality is a huge problem in workplaces across a wide array of industries. It’s not a secret; nor is it a secret that the tech industry is often one of the worst offenders. Indeed, I often find myself absolutely agog at how much of a problem it still is, despite the fact that this is 2017 and you’d think we’d be over it by now. Alas, though, we’re not — and as this one tweet underlines, sexism in the tech industry is alive and disappointingly well.

On June 13, Twitter user @Jackie_cs made an unsettling observation at a firm they were visiting for a meetup: “Just visited a tech co office w/several types of free beer on tap and 25¢ tampons & pads in the bathroom,” Jackie wrote. Then, in a followup tweet, they noted, “Not sure I've seen a better example of how men in tech just don't care or think about women in tech.” As Jackie themself pointed out when contacted by Bustle, having a uterus or getting periods doesn’t necessarily mean someone is a woman, and being a woman doesn't necessarily mean someone has a uterus or gets periods; even just as a metaphor, though, the contrast of free beer versus menstrual supplies you have to pay for is the perfect representation of the problem with corporate culture treats women — and anyone who isn’t a cisgender man, for that matter — in tech.

Many tech companies are known for the expansive selection of employee perks that are offered in their offices or on their campuses. It goes beyond free snacks, although food is frequently plentiful; the availability of chef-catered meals, massages, fitness classes, concierge services, transportation services, concerts, and more make many of these companies dream workplaces for a lot of people. It’s true that not all tech companies boast perks of quite this magnitude; however, it’s become part of the culture to offer whatever is possible — even if it’s as simple as free beer. And that’s what makes it all the more absurd that, for all those bells and whistles, menstrual products — a basic necessity for most people who get periods — would be overlooked.

Now, there are a couple of caveats worth keeping mind about this specific situation, which Jackie pointed out both in the ensuing Twitter thread and when contacted by Bustle: The building may manage the bathrooms, rather than the company that rents out the floor (which would make the menstrual product machine the building’s responsibility — stocking it, setting the price, and so on); it’s possible that the machine might say 25 cents, but actually be free — something which was brought up as a relatively common occurrence in a lot of the replies to the initial tweets (although honestly, this possibility wouldn't even have occurred to me); heck, the company might even provide menstrual supplies elsewhere in the office.

Even, so, though, I have… questions. Even if a building manages its bathrooms, that wouldn’t stop a company renting a floor there from saying, “Hey, it kind of sucks that this basic necessity costs money; maybe we can stick a basket with free menstrual supplies in the bathrooms to help make it suck less.” Or, if the machines were actually free but for some reason still said they cost 25 cents, that doesn't mean a company couldn't put new signs on the machines to make it clear that they’re free. (Jackie noted in the Twitter thread that someone in their mentions said it took her months to figure out that a “25 cent” machine was actually free because there was no signage to indicate otherwise.) I can’t help but feel that if a company can go so far as to think, “Let’s have a free beer tap in the office” — or, “Let’s have an onsite masseuse,” or, “Let’s have a nap room,” or "Let's have" any of the other perks that tech companies are often known for — it’s not unreasonable to ask that they also make an effort to think, “Let’s put free tampons and pads in the bathrooms,” even if they don’t manage the bathrooms themselves.

(If there are tampons available for free elsewhere, that’s awesome; in that case, my only question is about why they’re not in the bathrooms, as that seems to me the logical place to put them — but that’s a tiny quibble.)

For all its attempts to increase diversity in recent years, the tech industry is still overwhelmingly white and male. According to a Gizmodo analysis of diversity reports from major tech companies featuring data from 2015, the demographics tend to be between 48 and 61 percent white and between 54 and 76 percent male. (The analysis didn't include stats for LGBTQIA+ people.) And it’s clear that this mindset drives the company culture in a lot of these workplaces — something which is evinced by things like the availability of free beer, but not free menstrual products. As Jackie put it in a message to Bustle, “To me, this indicates that there aren’t women (or trans men) in the room when decisions are being made. Menstrual products aren’t the kind of thing that cis men pay attention to or think of, and so when they’re lacking that’s an indicator that the people making decisions are cis men.” And as another Twitter user also commented, “Lots of this stuff is ‘out of sight, out of mind,’ unfortunately.”

What’s more, this particular story is far from the only example of how thoughtlessness can foster workplace sexism, even if it’s unintentional; indeed, many people shared their own stories on Twitter in response to Jackie’s observation. One recalled an executive of a startup suggesting, in response to the knowledge that the company was almost entirely male, that men should be given more bathrooms in the name of fairness, rather than suggesting that the company hire more women; another told of an office that had six taps, but no tampons; and yet another noted that someone they knew who was working at an engineering site had to be escorted to an entirely different building in order to access a women’s restroom.

I think this Twitter user summed up all of these stories perfectly:

And beyond anecdotes — all of which are valid experiences deserving of attention in and of themselves — there’s also data to back the existence of the problem up. According to the 2017 Tech Leavers Study, which dug deep into why people voluntarily left jobs in tech, unfairness factors prominently employee turnover. Consider that women experienced substantially more unfairness than men did; that people of color experienced stereotyping at twice the rate of white people; that women of color were passed over for promotion more than any other group; that LGBTQIA+ people were more likely to be bullied; and that one in 10 women reported experiencing unwanted sexual attention. That's telling.

What the free beer/paid tampons and pads story illustrates — whether it’s taken literally or metaphorically; again, there’s a lot that we don’t know about the situation — is how it isn’t just major things like being passed over for promotions or bullying that contribute to workplace inequality in both the tech industry and our culture overall (although those are certainly big issues that do need to be dealt with). The little things matter, too — and they matter a lot more than those who don’t experience them might think they do.

My earlier point about the necessity of things like menstrual supplies being overlooked? That’s what those little things feel like: Like you yourself are being overlooked. It’s not an overtly hostile move, obviously, but the subtle digs — even when they’re unintentional — can do just as much damage. The effect microaggressions have when you deal with them day in, day out add up over time — and many Twitter users who remarked ironically about the “pipeline problem” nailed exactly why. So, too, did the Tech Leavers study, which noted:

The ongoing debates about whether the lack of diversity is due to a “pipeline problem” or a “tech culture problem” has failed to accurately frame the problem: That there [is] a complex set of biases and barriers thatbegin in pre-school and persist through the workplace. These cumulative biasesand barriers prevent the tech ecosystem from being more diverse, inclusive, andrepresentative of the United States population as a whole.

The pipeline isn’t the problem. We — our biases, our prejudices, our lack of consideration for others — are the problem.

It’s not about the beer. It’s not even about the cost of tampons (although as many period havers will tell you, menstrual supplies aren’t cheap; multiple reports have found that people who get periods will typically spend thousands of dollars on necessary supplies over their lifetimes). It’s about how simple thoughtlessness contributes to inequality at large, even though it’s an easy problem to solve.

As the saying goes, privilege is never having to think about it — so what do marginalized people have to do to get others to think?