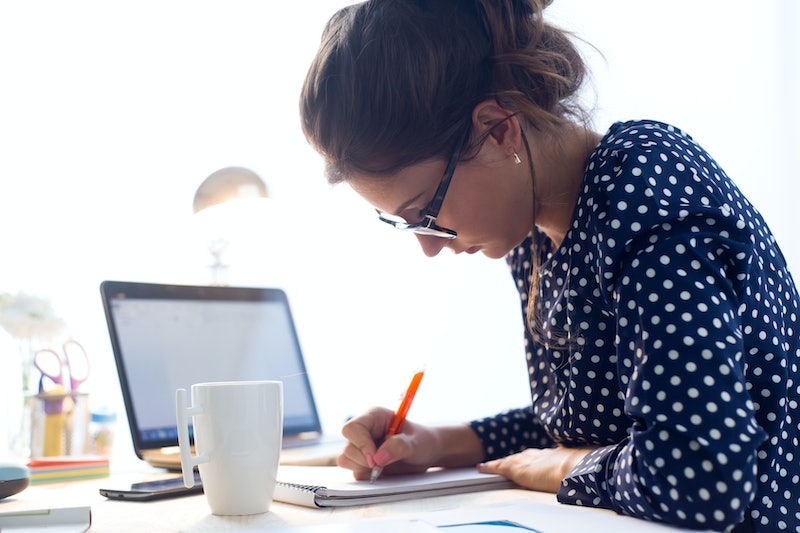 If you were to guess the biggest problem women face in the workplace, you might think of unequal pay, sexual harassment, or lack of attention in meetings. But while these are major issues, there's a different problem that tops them all. In a survey of 1,613 American women, the women's career site Fairygodboss asked what the biggest issues women faced at work were — and a surprisingly high number mentioned one thing above all else: Being overlooked for promotions.

Nearly half of the women surveyed — 44 percent, to be exact — felt that their companies didn't treat men and women fairly. And of those women, 79 percent said male and female employees didn't get an equal shot at promotions. The next-most-common issue (reported by 62 percent of respondents) was unequal pay. In addition, 43 percent of women who noticed gender inequality at their companies said evaluations and reviews were conducted unfairly, and 27 percent believed sexism entered into hiring decisions.

These data show that "women are really attuned to the way promotions happen at a company," Fairygodboss CEO Georgene Huang tells Bustle over email. "If promotions are unfair, then they will be deeply felt and noticed." While many discussions about women in the workplace tend to focus on equal pay, these issue are very related, since women will get fewer raises if they're getting fewer promotions, Huang points out.

Deloitte's Millennial Survey from earlier in 2016 also found that women were noticing this disparity in promotions, with half of the women surveyed saying they were "being overlooked for leadership positions." These data show that even if managers themselves aren't aware of their biases, women are — which may be why, according to Deloitte's survey, women are more likely to want to leave their jobs within the next five years.

To solve this problem, Huang recommends companies set objective criteria for promotions, let employees know what these criteria are so they can hold decision-makers accountable, and train managers on making fair promotion and hiring decisions. Fairygodboss also encourages treating women employees fairly across the board so that they don't leave before they can even have the chance to receive promotions, establishing quotas for women in management, and setting up mentorship programs for women to get support from their coworkers, according to a press release for the study provided to Bustle.

The survey also asked women what their companies can do to make them stay, and sure enough, the third most popular answer was "promote more women into leadership." The top measures women felt companies could take to retain them were fixing culture and management issues, which is a top reason women cite for leaving tech companies, and increasing their pay.

Beyond being fair to women themselves, having more women leaders actually improves companies by offering more diverse perspectives and calling attention to issues men alone may not think about. Gender diversity within a company has actually been shown to bring in more money as well. Since companies presumably want to retain their employees, it's in their best interest to listen to women's concerns about workplace sexism and take concrete steps to rectify them.