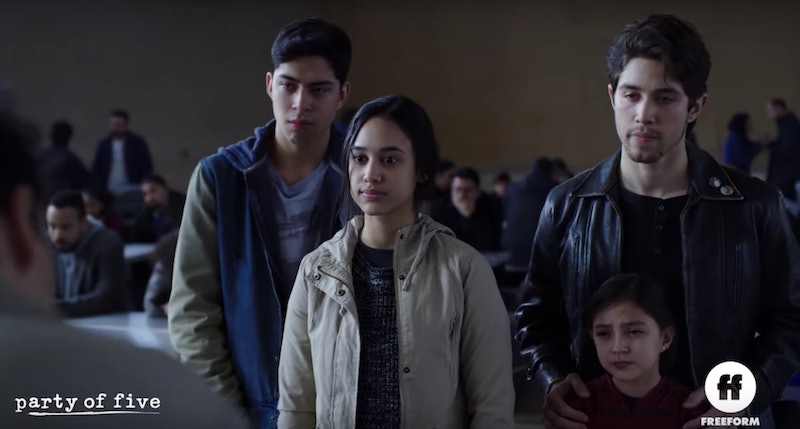 Freeform’s newest TV revival puts immigration front and center. The first look at the Party of Five reboot shows the family’s goodbye at an ICE detention center. The series, which premieres on Freeform on Wednesday, Jan. 8, offers a modern lens on the ‘90s classic: Party of Five will follow five siblings — the Acosta children — as they navigate daily life on the heels of their parents’ sudden deportation back to Mexico. As per a press release, the synopsis, in part, reads, “In a new iteration by original series creators Amy Lippman and Christopher Keyser, this beloved story of a young family bound by adversity will be retold through the lens of current-day themes and cultural conversations.”

In the series’ first extended look, the tolls of modern-day immigration policies are put front and center. The clip opens with parents Javier (Bruno Bichir) and Gloria (Fernanda Urrejola) as they exchange tearful goodbyes with their children, Emilio (Brandon Larracuente), Lucia (Emily Tosta), Beto (Niko Guardado), and Valentina (Elle Paris Legaspi), in a detention center. The four are asked to look after their youngest brother, baby Rafa, in their parents’ absence. In the clip’s most affecting scene, Lucia says to a man who escorts her mother away, “She’s not less of a person than you are. What’s the matter with this country?”

The clip concludes with some parting words from Javier as he attempts to console his distraught son: “You don’t remember. You were so tiny. We carried you across the desert, across the border. August. 106 degrees. We thought we were going to die there. And look at you. Here you are. You’re so big and smart and talented. You be what you want to be, OK? I’m so proud of you.”

The reboot comes on the heels of the Trump administration's current policies to separate immigrant children from their parents at the southern U.S. border. In September 2017, The Hollywood Reporter first reported the news of a Party of Five reboot with immigration being a main issue in the show. The original series, which aired on Fox between 1994 and 2000, followed five siblings — the Salinger children, depicted by Scott Wolf, Matthew Fox, Neve Campbell, and Lacey Chabert — who similarly had to learn to live on their own on the heels of their parents’ deaths via car crash.

At the Television Critics Association press tour back in February, Lippman explained the decision to reboot the series with a modern issue at the forefront. “As we began to see the political climate and stories like this on the front page of every newspaper, we began to realize that what we imagined as a family of orphan 25 years ago had transmogrified into a family of kids living without their parents," Lippman said, as per Variety. “We don’t want to go in with a strong political agenda, we just want to tell what [it] is like for these families."

The series has taken measures to accurately depict the immigrant experience. Michal Zebede, the series’ writer and co-executive producer, told the TCA panel that they’ve spoken to “people in this country whether illegally or DACA and learned about what that experience is like,” “as well as attorneys for those here illegally or DACA,” as per Variety. More so, Keyser has revealed his hopes to fill the writers room with Latinx and immigrant writers to ensure proper representation.

Party of Five premieres on Freeform on Wednesday, Jan. 8. If the extended sneak peek is any inclination, the reboot is required viewing.