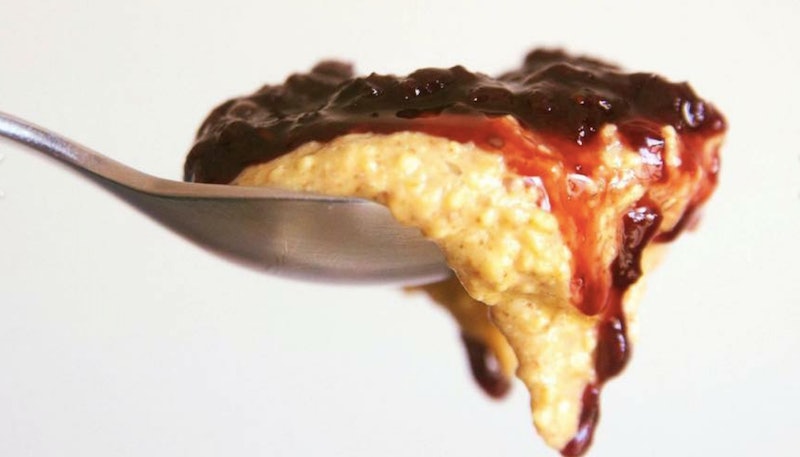 Excellent news for anyone who never outgrew their love of peanut butter and jelly sandwiches: Not only do PB&J of the month clubs exist, but — even better — the PB&J Of The Month subscription from Big Spoon Roasters will provide you with the makings for the fanciest PB&Js you’ve ever tasted each month. Who says this childhood favorite can't grow up along with you? Not me, that's for sure — and not Big Spoon, either.

Delish gets the credit for bringing the general idea of a PB&J of the month club to my attention; they recently highlighted one offered by a third-party seller on Amazon called University Gifts. The details were a bit scarce on that one, though, so I started to dig around a little — and I made a discovery: That PB&J club is not alone in the world. A handful of other PB&J of the month clubs exist. What’s more, if the price tag of the University Gifts club seems a bit steep to you — it’s $468.98 for 12 months, or about $39 per month — they’re a bit more affordable, too.

The one that struck me as the cream of the crop is Big Spoon Roasters’. A handcrafted nut butter company based in Durham, North Carolina, Big Spoon Roasters was founded by Mark Overbay in 2011 as a side project— according to a profile of the company published at Bon Appetit in 2014, Overbay was Counter Culture Coffee’s marketing communications manager by day and a seller of peanut-pecan butter at local farmer’s markets by… well, not night, exactly, but in his spare time, at least. His nut butters took off unexpectedly, though, and within a few years, Big Spoon Roasters became Overbay’s full-time gig — and now, the company offers an array of unique nut butters, including Peanut Cocoa, Chai Spice, and Maple Cinnamon. Both the butters and a number of other items, including snack bars and gift packs, can be found at stores like Whole Foods, as well as purchased online.

Big Spoon also sells a featured jam from a fellow homegrown company every month — which brings us to our main point: The jams can be purchased individually or as part of a special pairing with one of Big Spoon’s nut butters… and if you opt for the pairing, you can either buy it as a one-off, or as part of an ongoing monthly subscription. That’s the PB&J Of The Month subscription, and, well… let’s just say that if you’re a fancy sandwich fan, you’re going to want to jump on this as soon as you can.

For $29 bucks per month, you’ll get one jar of that month’s featured jam and one jar of one of Big Spoon’s nut butter in a flavor specifically selected to complement the jam. March 2019’s pairing is Moro Blood Orange & Tonga Vanilla Bean Marmalade from Los Angeles-based jam company and café Sqirl and Big Spoon’s original Peanut Butter. The subscriptions are available on a month-by-month basis, as well is in specific durations (three months, six months, or a year); in either case, you can either pay each month as it comes or pre-pay the entirety of a three-month, six-month, or year-long subscription. (You’ll need to supply your own bread, though — it’s not included. Just a heads up about that.)

Now, it’s worth noting that typically, each jar sold by Big Spoon — either of jam or of nut butter — is around $14 a pop, which means the cost of the subscription itself doesn’t really provide any savings. However, where you will save a few bucks is on shipping. Shipping for regular orders up to $49.99 is $9 — but it’s free for the subscription, which means you’re only paying the flat rate of $29 for each month’s pairing, rather than closer to $39 when you account for shipping.

Oh, and hey, guess what? If you’re allergic to peanuts (or just don’t like ‘em), here’s also an AB&J Of The Month subscription — Almond Butter & Jelly Of The Month. This month, the same Sqirl jam included in the March PB&J Of The Month subscription is paired with Big Spoon’s Almond Ginger butter, which sounds divine. It’s a tiny bit more expensive — $31 per month, as opposed to $29 — but I’d be willing to bet that’s due to the price of ingredients. Shipping is still free, so you’ll still save $9 on the cost of actually, y’know, getting your nut butter and jam to you.