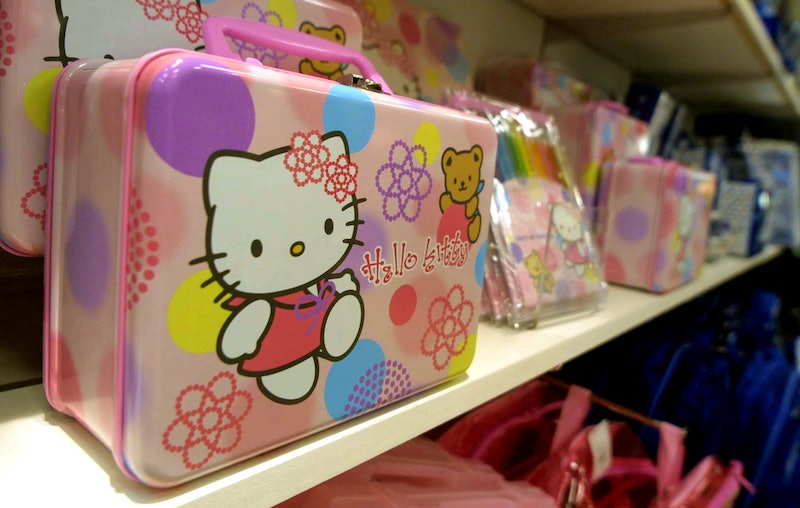 If you grew up in the '90s, there were two times of day you revered: Recess and lunchtime, the latter of which was possibly the single most anticipated hour of every '90s kid's school curriculum. Because — depending on whether or not your mom's lunchbox skills were up to snuff — it meant you would soon be snacking on the foods every cool kid ate during lunch in the '90s. Is it any wonder there was a social hierarchy associated with eating during the decade? The sheer variety of cult-favorite foods available to us (or, rather, the parental units packing our meals) was downright cornucopian.

Of course, the snacks of yesterday are a little different from the snacks of today. We liked to turn our food into toys in the '90s, because the spirit of the era was such that playing with your food was totally acceptable — or at least, it was in certain situations. The bottom line is that being a kid in the '90s was all about fun, and embracing the time during which kids could be... well, kids. Our food reflected that idea, and our lunch boxes did, too.

The good news is that although many of these "cool" snacks have been discontinued, several of them are still around — you can easily pick out the '90s kids in any room by pinpointing the adults who still pack these any of the following foods for lunch.

These little plastic bento-like boxes consisting of lunch meats, cheese, and crackers — or, if you were really lucky, DIY pizza makings — plus a sweet treat were hella cool compared to your BFF's plain ol' PB&J.

2. Fruit by the Foot

Tasty? You betcha. Super fun to stretch out and wrap around things? Naturally. A big ol' sticky mess that made your hands tacky and got in your hair 'cause you couldn't be trusted to just eat your everlovin' Fruit by the Foot and not play with it? Indubitably.

Quite possibly the pinnacle of '90s snack foods were Funyuns — a culinary phenomenon described simply as "onion flavored rings." Rings of what? How, exactly, do you derive a fried onion flavor? The mysteries of the '90s abound.

In reality, this was probably something our moms served us when the household groceries were running low or the funds was tight (bologna's kind of a budget meat, ya know?). We didn't care why were eating them; we just cared that we got to.

Also known as cafeteria currency, you could buy these bad boys for the bargain price of, like, three for a dollar and then trade them for entire meals. Plus, they were shrouded in intrigue — what was that mystery flavor?!

I was sent to lunch with the little microwavable, red-lidded Chef Boyardee make-a-meals so often growing up that I halfway suspected my mom was Chef Boyardee.

Given the fact that a pack of Gushers in your lunchbox pretty much made you cafeteria royalty, we should have known these guys would become the fruit snack by which we would judge fruit snacks for all of eternity.

You knew your mom loved you if she packed you Bugles, as opposed to boring old potato chips. What other lunch food let you wear it? No '90s kid could (or can) resist the temptation to shove these salty morsels on our fingers and cackle maniacally.

Sure, the frosting-to-cookie ratio was skewed, but that was part of the fun, wasn't it? When all was said and done, you literally got to lick your fingers while your classmates looked on enviously at your tiny vat of confetti-flecked ambrosia.

Somehow '90s moms were hip to the fact that we '90s kids preferred our fruit flattened, rolled up, and stuffed into a clever little package. I'm 97 percent certain no one actually got through pulling out the shapes perforated into the roll-up before balling it up and devouring it, but it was a good thought.

If you were one of the lucky ones whose parents packed a Hot Pocket for lunch, you were the cause of some serious rubbernecking at your cafeteria table.

Is there any '90s food more visually iconic than the Handi-Snack? A quick glance into your lunchbox (or brown paper bag, or mini-cooler, or whatever) could reveal whether you were a lunch winner or loser — and it all came down to that cheesy goop and little red smear stick.

Each day was full of possibility in the '90s. Specifically, the possibility to lord over all your friends that your yogurt came with its very own pack of sprinkles ... unlike their lame-o plain yogurt.

Admittedly, you felt kind of sorry for your friends whose lunch included a side of carrot sticks or celery (although, in hindsight, those were much better choices). Strangely, though, you never felt bad enough to actually share your delicious pudding cup.

Whether they were the pre-packed variety (in the shiny blue wrappers, natch) or homemade didn't make a ton of difference, but you definitely got mad props if your parents made them themselves — and especially if they made extra for the rest of the class.

More like this
10 Pumpkin Recipes That Are Way More Creative Than Pie & Lattes
By Rebecca Deczynski and Alexis Morillo
Netflix Reveals First Look At Wednesday In The 'Addams Family' Spinoff Series
By Bustle Editors
The Spiritual Meaning Of Angel Number 000, Explained
By Kristine Fellizar
TikTok's Butter Board Might Be The New Cheese Plate
By Emma Carey
Get Even More From Bustle — Sign Up For The Newsletter