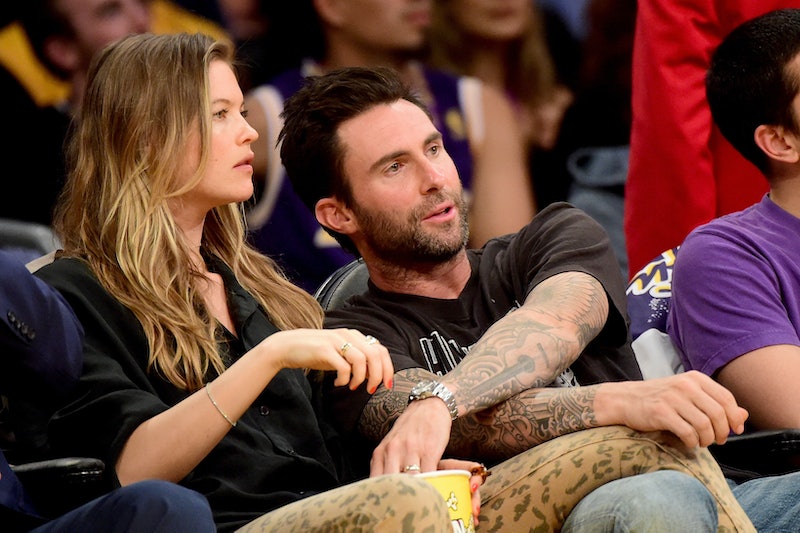 On Super Bowl Sunday, Gio Grace and Dusty Rose had front-row seats… to a television set. (Children of stars: They are just like us!) The day after the big game, Behati Prinsloo shared a photo of her and Adam Levine’s kids watching the Super Bowl halftime program at home. Why yes, as a matter of fact, the photo of Levine and Prinsloo's daughters plopped in front of a television as their dad's band performs in the middle of Sunday's game is extremely cute.

Now, if you happen to be wondering why their children were not at the Super Bowl and/or are currently questioning the Prinsloo-Levine kids' Maroon 5 fandom, please note that Gio Grace is not even a year old, and Dusty Rose just celebrated her second birthday this past September. They are little kids, and hanging out in the pit at the halftime show is not exactly the most baby-friendly experience. (OK sure, babies do go to concerts all of the time. And yeah, Levine and Prinsloo's babies would more than likely end up in, like, a fancy VIP box at the stadium that was 100x more baby-friendly and genuinely comfortable and probably a solid way to hang out with two small children at a Super Bowl. But let’s not get lost in the hypothetical weeds.)

Moreover, they probably wouldn't really remember the time they went and saw their father play one of the biggest live events of the year, so why make them leave their impressive collection of Peppa Pig figurines, you know?

Not bringing their babies to the Super Bowl was Levine and Prinsloo’s plan all along. Before Sunday’s show, Levine told Entertainment Tonight that Gio Grace and Dusty Rose would not be in attendance. The Maroon 5 frontman explained,

Watch their dad’s band headline the halftime show on TV is precisely what Gio Grace and Dusty Rose did on Sunday. They watched Maroon 5 play songs like “Harder to Breathe,” “Moves Like Jagger,” and “She Will Be Loved.” They saw Big Boi perform “The Way You Move.” They saw Travis Scott perform “Sicko Mode.”

After the show, Levine and Prinsloo got to eat Shake Shack, and Dusty Rose and Gio Grace got back to toddler matters such as watching Peppa Pig and arranging their Peppa Pig toys on the coffee table.