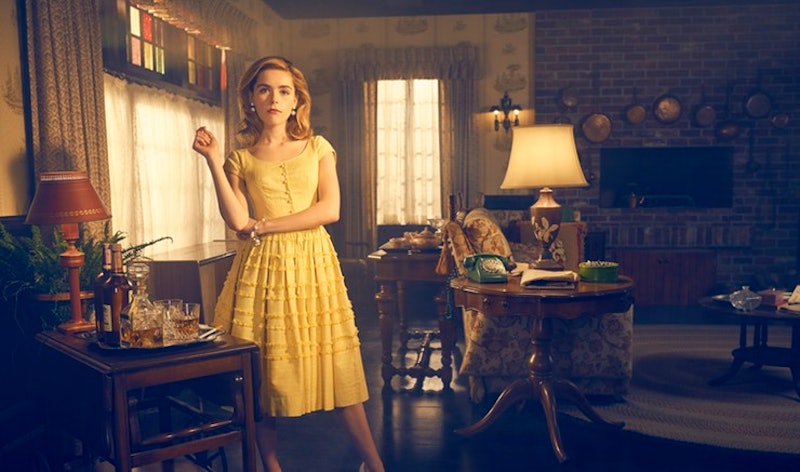 The hot new FX series Feud has two of the best leads on television, but the show's talent runs deeper than stars Susan Sarandon and Jessica Lange. One of the brightest spots among the cast is Kiernan Shipka. Previously best known for her role as Mad Men's Sally Draper, Shipka is now all grown up and portraying the daughter of Bette Davis, B.D. Merrill. But how does a photo of B.D. Merrill in Baby Jane compare to Shipka's portrayal of her in Feud?

Honestly, the casting is pretty spot on. Shipka is 17, and Merrill — whose birth name is Barbara Davis Sherry — was 15 at the time of her role in Whatever Happened to Baby Jane? Merrill had a bit part in the film, which her mother is rumored to have forced her into, as Liza Banks, the daughter of the Hudson sisters' next door neighbor in the film. Merrill did not have much of an acting career, nor did she appear to want one, having appeared in just two films in her life. Baby Jane was easily her biggest role, but 11 years earlier she had an uncredited part in another film starring her mother, Payment on Demand. But since a Baby Jane photo is what you came here to see, here is Merrill as she appeared in the 1962 film:

Pretty strong Sally Draper vibes, right? Not long after her role in the film, Merrill got married at 16 — with her mother's blessing — to 29-year-old Jeremy Hyman, who is the nephew of Elliot Hyman, the owner of Seven Arts Productions (the studio that produced Baby Jane). The pair are remarkably still married today, but their life's work is far from Hollywood.

B.D. Hyman, as she has been known for the past 54 years, is a born-again Christian pastor and the head of a church in Virginia. She has authored a number of books about Christian topics, but her most notorious claim to fame was a book she wrote about her mother in 1985 called My Mother's Keeper. The book gave a very unflattering account of Davis and accused her of abuse and alcoholism; claims that were refuted by the actress and by Hyman's father, actor Gary Merrill, whom Hyman also claimed was abusive. The book is often compared to a similar book, Mommie Dearest, which was published in 1978 by Christina Crawford, the daughter of Davis' Baby Jane co-star, Joan Crawford.

Kiernan Shipka certainly bears a physical resemblance to how B.D. Hyman looked during her brief career as an actor, but that's probably as far as the similarities go between the two women.