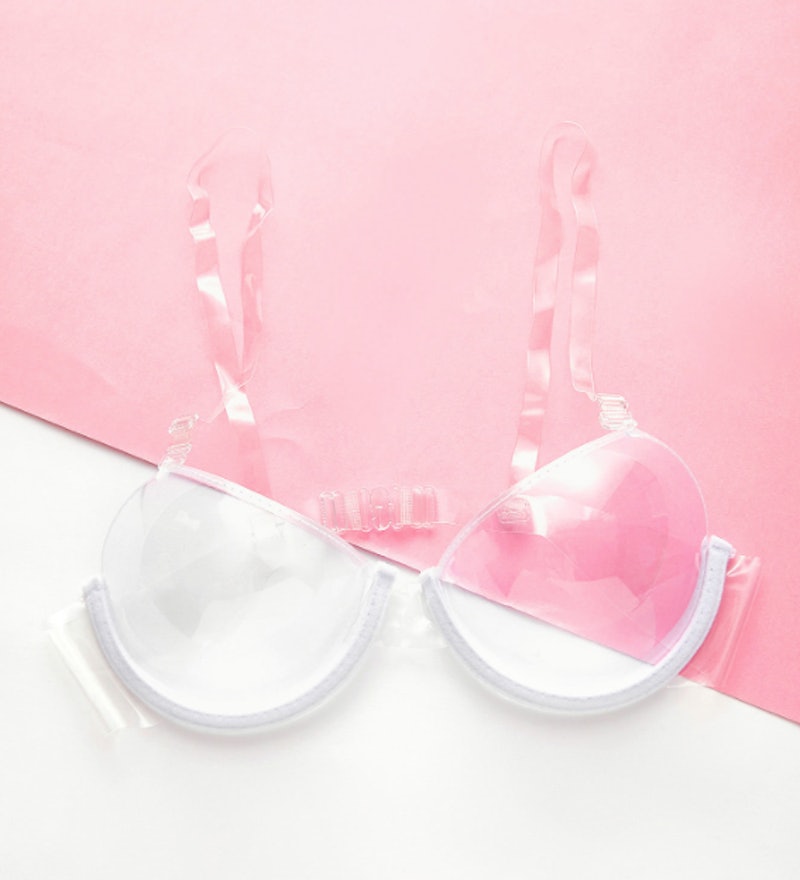 One of the greatest feelings of all time is coming home after a long day and taking off your bra. It's such a satisfying experience — and there's a reason for that. There's nothing comfortable about poking wires, straps that dig into your shoulders, and your puppies being smushed all day. But just when it seemed that undergarments couldn't get any more uncomfortable, online retailer SheIn proves that theory wrong with a strange, all-plastic bra that looks awfully painful.

It's one thing to wear plastic bra straps. Although these clear adjusters are popular for their versatile, no-show design, they're often super duper uncomfortable. So why in the world anyone create a bra made entirely of the same, incredibly annoying material? Surprisingly, the international retailer known for selling novelty underthings like Instagram-worthy adhesive backless bras and lace Ta Ta Towel lookalikes and has done just that.

There are plenty of other weird, but totally ingenious bras on the market that actually come in handy. But no matter how you slice it, a plastic bra just seems like a really bad idea. You don't even have to try it on to know that it's a nightmare. Images, alone, are enough to make anyone cringe.

In theory, the plastic undergarment would be a wardrobe essential. Clear straps make it convenient for a variety of outfits where you don't want them showing on your shoulders. Plus, its colorless design makes it great for pairing underneath any shirt without being seen.

But there's just no getting around the pitfalls of having a bra made of plastic. From the looks of it, the material seems stiff, a definite no-no if you're going to be wearing this contraption all day. If anything, its budget-friendly, $10 price tag is the only attractive feature of the bra.

According to commentators that tore the garment to shreds, however, its affordability wasn't enough to make up for the fact that this bra isn't the least bit functional. From its fit to its feel, the bra was the ultimate disappointment — so much so, that one customer immediately threw it into the trash. Talk about seriously hating your bra!

No matter which size customers ordered, many had trouble fitting into the garment.

Looks like the bra was a no-go for anyone with big boobs. This is not a plus-size friendly garment, my friends.

As it turns out, its plastic material wasn't durable either, literally breaking in two when one customer tried it on.

If its poor quality material and sizing issues isn't enough to turn you off, this customer's review may just do the trick. Apparently, the bra is quite the noise maker, too. Weird, right?

Don't expect the cups to conform to your shape, either. Numerous reviews revealed the bra's material resembled a plastic bottle. Errr, what?!

Despite the negatives, a few customers tried to look on the bright side and get some use out of the weird garment.

But for the overwhelming majority, this undergarment just didn't cut it.

Brief and to the point, this reviewer summed up in three words most of the SheIn customers' frustrations.

It all boils down to this: an all-plastic bra may not be what you want in your life. Aside from a clear design that makes it quite universal, the material just doesn't work when it comes to lingerie. From the sounds of it, plastic is perhaps, the most uncomfortable and inconvenient material that any retailer could use for a bra.

If it does seem like your cup of tea, then by all means, give the plastic bra a whirl. Just know that you've been warned, though.

More like this
Kendall Jenner Wore A $38 Sweater & Sports Bra For A Chic Workout Fit
By Allie Fasanella
4 Chic Outfits To Wear With Loafers, According To A Fashion Editor
By Bella Gerard
Cyber Monday Deals 2022: The Best Fashion Sales To Shop
By Dominique Norman
The Best Black Friday 2022 Fashion Deals To Shop This Year
By Dominique Norman
Get Even More From Bustle — Sign Up For The Newsletter