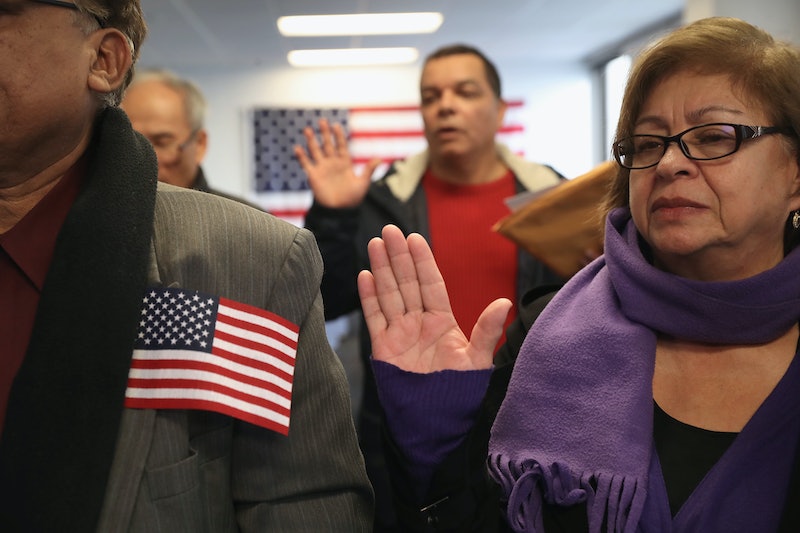 Who gets to be an American? It's a question that's confronted our country at every turn, and a new poll released Monday by Grinnell College in Iowa seeks to answer what trait makes someone a "real American." After being offered a list of potential traits, 90 percent of people polled said "believing in treating people equally" was "very important" to being a "real American." The next most important trait was taking responsibility for your actions with 88 percent of people rating that as "very important" part of being a "real American.

The poll overall showed nearly universal agreement on what constitutes a "real American," with slightly different ideas between Republican and Democratic voters. Republicans who were polled reported that the top three traits for a "real American" are people who "take personal responsibility for one's actions" (94 percent), those who support the U.S. Constitution (93 percent), and then treating people equally (90 percent.) Democrats surveyed included the ability to "accept people of different racial backgrounds" in their top three most important traits with 88 percent rating it very important. (Surveyed Democrats also include equal treatment and personal responsibility in the top three most important traits.)

"Most of those polled think that basic agreement with certain ideals, such as treating people equally, valuing difference, and taking responsibility for your own actions, are important to being American. I was especially happy to see that support for accepting people of different racial, ethnic and religious backgrounds far outweighs ideas of being American that focus on a particular kind of background or identity," Grinnell College associate professor Caleb Elfenbein said in a press release with the poll results.

An ability to accept people from different races and religious backgrounds were also rated as very important trait of a "real American" with 81 percent and 78 percent, respectively. The poll was conducted from Nov. 24 to Nov. 27 among 1,000 adults. The margin of error was plus or minus 3.1 points. Read the whole poll here.

There were other differences between the parties, however. Among Republicans surveyed, 62 percent said speaking English was a "very important" trait of a "real American." By comparison, only 44 percent of independents surveyed and 29 percent of Democrats surveyed said the same.

The poll found that a majority of people at least want to keep the number of immigrants entering the country at the same level. But 11 to 27 percent surveyed believed that the number should be increased, depending on the country of origin. Additionally, the poll identified that a majority of adults surveyed (55 percent) believe that the U.S. has "a moral responsibility to grant asylum" to people who are coming to the country after fleeing violence.

Though treating others equally was at the top of the list of traits important for a "real American," there are certain groups that face more discrimination, according to the poll. A majority (56 percent) said Muslims deal with "a lot of discrimination" in America, followed by African Americans (52 percent) and LGBT persons at 52 percent. (The poll's language omits the Q in LGBTQ.) Grinnell reported that "higher proportion" of Democrats surveyed said these groups faced "a lot of discrimination" in comparison to their Republican counterparts.

Elfenbein said this part of the poll was surprising. "I was surprised, but pleased to see there is a recognition that discrimination is a part of everyday life for some Americans. This is a good basis to influence change," Elfenbein said in a release.