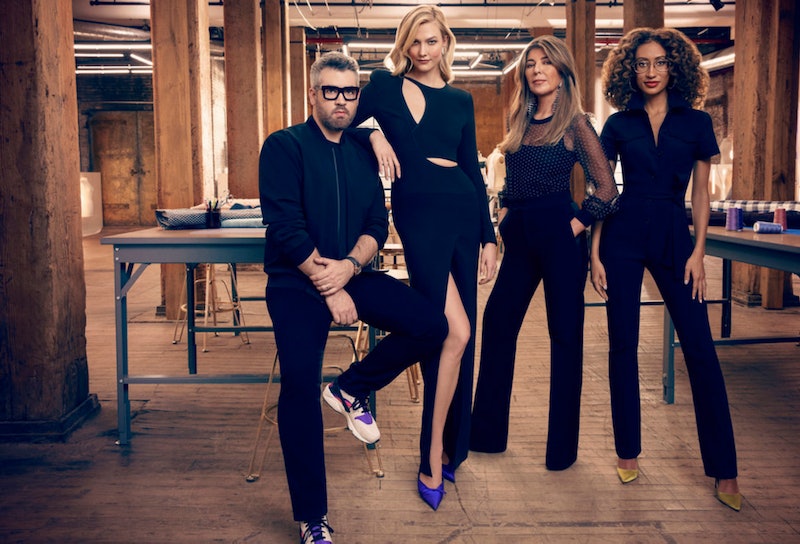 A week from today, the greatest fashion design competition program in all the land will make its triumphant return to Bravo, and the fashions are already flyin'. The network has released a first look at Project Runway Season 17 that teases a runway show that may be unlike anything we have ever seen on the series. In the clip, the designers gather ‘round (love you forever, Tim Gunn!) the runway before their first challenge, and then show looks from their previous collections to the judges and a group of fashion writers.

Well, this is a cool and fun way to introduce us to this season’s group of contestants, isn’t it? Correct me if I am wrong, but I do not recall any of the previous 16 seasons of Project Runway kicking things off with a “Let us get to know these designers by looking at what they are capable of when they are not restricted by this reality show’s time limits or challenge requirements” mixer. The closest thing I can think of is the Season 2 premiere where they were given a bunch of muslin and a week to prove why they deserve to still be in the running toward becoming America's Next Top Fashion Designer, but that really is not the same as presenting a look they made totally separate of the show.

“Before we get started, we want to celebrate these designers,” explains host Karlie Kloss. “We asked each of them to bring a look from a past collection to introduce themselves to the fashion community, and give us a preview of what’s to come.” Oh, and what a preview it is. The fashions featured are so cool and impressive and creative— please don't make me pick a favorite. (OK fine, I think my favorites are Kovid Kapoor's dress and Venny Etienne's skirt and blouse look. But who knows, I could change my mind by next week.)

This new era of Project Runway keeps on rolling out the big changes, eh? After 11 seasons at Lifetime, the series has moved back to Bravo. Show veterans Heidi Klum, Tim Gunn, and Zac Posen all left the cast. Kloss has stepped into the host role, Christian Siriano is now the series' mentor, and Elaine Welteroth and Brandon Maxwell are two of our judges. Longtime Project Runway judge Nina Garcia is the only member of the old guard who will be part of the upcoming season.

And let us not forget about the workroom's makeover. The show's new workroom looks nothing like the workroom of yesteryear, which is not a bad thing! No offense meant to the old workroom, but it was probably a good idea for this new era to go with a new workroom to set itself apart from the old era.