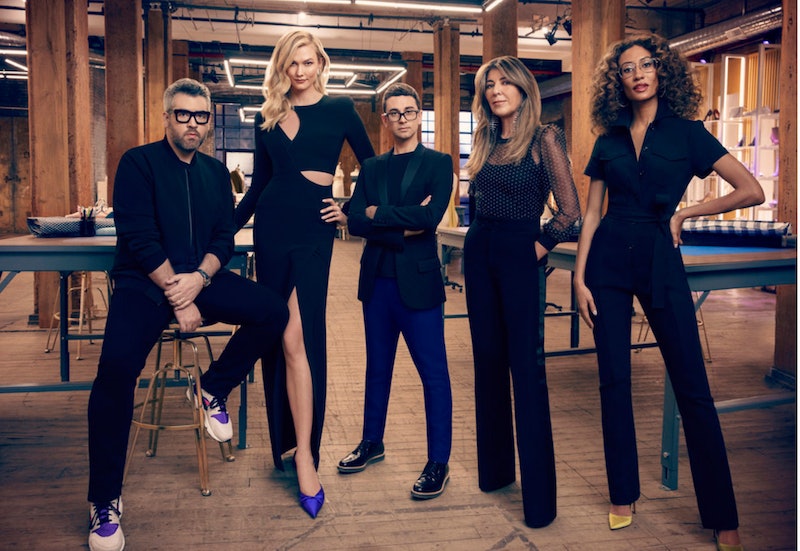 Like a model waiting for her turn to take the runway and show off a contestant's garment to the judges, the seventeenth season of Project Runway is just around the corner. The beloved series will premiere on March 14, and judging by the trailer for Project Runway Season 17, its return to Bravo will be a fantastic one. Hosted by new Project Runway host Karlie Kloss, the preview gives us a glimpse at the new era of the long-running reality series, and whew, what an exhilarating glimpse it is. This new lineup is so great! And the show's original lineup was so great, too! The whole cast shakeup situation is more bittersweet than a bag of bittersweet chocolate chips a Project Runway contestant might grab during an unconventional materials challenge at Hershey's Chocolate World in Times Square!

For the first 16 seasons of the fashion design competition series, Heidi Klum served as the host and one of the judges, and Tim Gunn was the mentor to the contestants. Their tenure officially came to an end in Sept. 2018 when Klum and Gunn announced they would be leaving Project Runway to work on a new Amazon show together. “I’m most excited that my journey with my dear friend and colleague, Tim Gunn, is far from over,” Klum said in her statement. “We will be partnering with Amazon for a new show, and we’re excited for everyone to see what we’re designing next!”

A month after Klum and Gunn revealed they’d stepped away from Project Runway, we learned who would be on Season 17 of the reality show. Model and coder Karlie Kloss was named the new host/judge, and designer and Project Runway Season 4 winner Christian Siriano has stepped into shoes of the mentor role. Former Teen Vogue editor-in-chief Elaine Welteroth, fashion designer Brandon Maxwell, and Elle editor-in-chief and Project Runway veteran Nina Garcia round out Season 17's panel of esteemed judges.

Are you beyond stoked for Season 17? Of course you are. Can you not wait for March 14 to get here? Of course you can't. I can't offer you a time machine, but I can offer you this video in which Siriano takes us on a tour of Project Runway's beautiful new workroom.

Yes, it's a new workroom. But don't worry, there is an accessory wall in this workroom, too. (Ugh, could you imagine a Project Runway without an accessory wall?) May the contestants use it very thoughtfully.

More like this
Netflix's 'Bling Empire' Season 3 Trailer Includes A 'Selling Sunset' Cameo
By Kadin Burnett and Sam Ramsden
Everything To Know About 'Bling Empire' Season 4
By Gretchen Smail
The 'Love Is Blind' Season 3 Teaser & Release Date Are Here & The Cast Is "All In"
By Kadin Burnett, Grace Wehniainen and Gabrielle Bondi
Devon Diep From 'Bling Empire' Wrote A Song About Her “Second Chance At Love”
By Grace Wehniainen
Get Even More From Bustle — Sign Up For The Newsletter