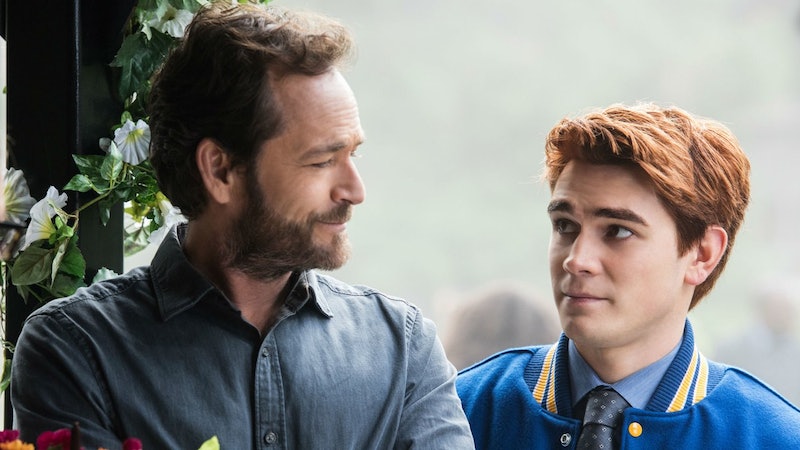 The Riverdale cast is back to work on its new season, their first without Luke Perry, who passed away on March 4 from complications following a stroke. No surprise, the first day back on set brought out a lot of emotions for those who worked with him over the past three years. Fans got a look behind the scenes of this emotional moment in this Riverdale Season 4 cast photo paying tribute to Perry at the season's first table read.

"There was nothing but love, memories and mourning for our beloved Luke as we honor him in our first episode back," Mädchen Amick, who plays Betty's mom, Alice Cooper, captioned her Instagram shot of the Riverdale cast. The photo, posted on Monday, July 8, shows the cast sitting at what appears to be the very first table read for the new season, which will kick off with a Luke Perry tribute episode. Perhaps, that tissue box in front of Amick is a hint that fans should buy their own when Riverdale returns this fall.

Marisol Nichols, who plays Veronica's mom, Hermione Lodge, also shared Amick's photo on Instagram, writing her own sweet note to Perry. "Dedicated to Luke," she wrote. "We love you, man. Honoring you the best way we know how." The best way the Riverdale cast knows how is with an entire episode that will honor the late actor and his character Fred Andrews.

Last season, the CW series aired its final episode with Perry, but Season 3 ended without addressing the actor's death. Instead, the show explained Fred's absence by saying he was away on business. While fans were surprised by this decision, creator and showrunner Roberto Aguirre-Sacasa explained that because the season was already written at the time of Perry's passing, they wanted to wait until this upcoming season so they could pay proper tribute to the actor.

Last month, Aguirre-Sacasa shared a photo of the script for the Riverdale Season 4 premiere titled "Chapter Fifty-Eight: In Memoriam," which will be the show's final goodbye to Perry and his character Fred Andrews. "Probably the most important episode of #Riverdale we’ll do this year, if not ever," Aguirre-Sacasa tweeted. "A tribute to our fallen friend. Thankful for this opportunity to honor Luke & Fred."

The episode, written by Aguirre-Sacasa and directed by Gabriel Correa, will air Wednesday, October 9, on The CW. Undoubtedly, the premiere will set up a season that will focus with how Archie and others Riverdale deal with this loss.

Already, Aguiree-Sacasa has talked about the ways the show will deal with losing Perry, most notably, by giving Molly Ringwald more screen time.

“[We’ve told her], ‘You’re welcome back anytime, as often as you want and as much as you want,'” Aguirre-Sacasa told TVLine in May of Ringwald, who plays Archie's mom, Mary, having a bigger role next season. “We actually already had her scheduled to come back to Riverdale to visit Archie and Fred. When the tragedy happened, she said, ‘If you need me to stay, I’ll stay.’ And I said, 'We’d love you to stay’… We’ve talked about Molly having a bigger presence next year to help her son.”

Like Archie, fans might also need Ringwald and the rest of the cast to help them get through this first season without Perry.