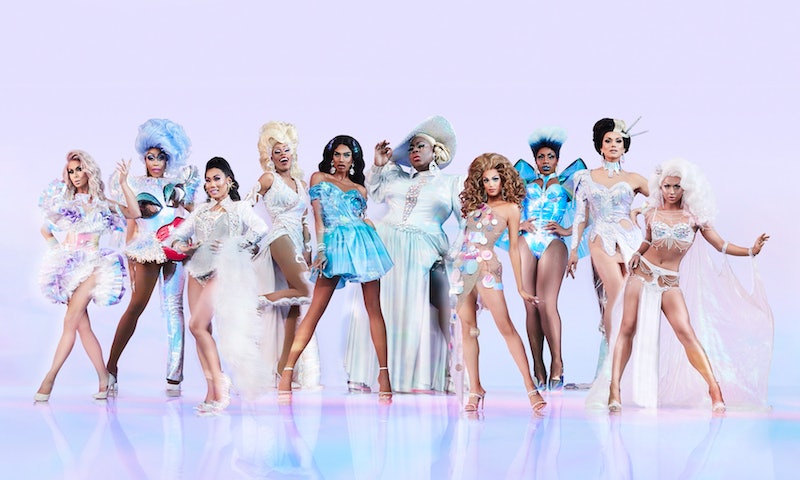 Drag Race fans, get your game faces on. Because, come December, fan-favored queens from Drag Race seasons past will return to the stage for an undoubtedly fabulous round of all-star performances. If the new trailer for RuPaul's Drag Race All-Stars 4 is any indication of what's ahead, it seems entirely safe to say this forthcoming round of mic-slinging competition is going to be as fierce as it is fun. That shouldn't come as a surprise to seasoned fans of the long-running reality series, which famously attracts the best and brightest our nation's drag scene has to offer.

And, given RuPaul's historic predilection for thematic competition (consider any one of Drag Race's many "challenges," which differ from episode to episode), it seems totally fitting that this particular All-Stars go-round will infuse a little bit of holiday spirit into its upcoming format. 'Tis the season, as they say.

And the brief teaser video (ahem, music video) released by VH1 via YouTube Monday, Nov. 26, just a few weeks ahead of the season's Dec. 14 debut, is full of holiday spirit. The whimsical promo hardly runs for more than a minute, but that's just enough time to get acquainted with the next generation of All-Stars and their glorious take on "holiday cheer."

Monday's All-Stars 4 trailer starts off with the beginnings of what might sound like "Carol of the Bells," a fairly traditional Christmas jingle. But, as the revamped holiday track's quick musical intro segues into its first verse, the Drag Race promo video makes itself clear: This is no ordinary holiday caroling sesh. Rather than "Carol of the Bells," the trailer actually features a snippet of a distinctly RuPaul-esque parody adaptation, called "Carol of the Queens." According to Entertainment Weekly, the track was voiced by select members of the New York Gay Men's Chorus, which really just makes all this holiday-themed Drag Race news even sweeter.

As "Carol of the Queens" picks up in the background, All-Stars 4's new trailer rolls out the upcoming competition roster. The lineup is pretty easy to follow, since the song's lyrics have quite literally been revamped as a means of introducing this season's candidates. (To witness the full extent of this incredible pre-Christmas gift from the RuPaul team, fans should probably just watch the promo video themselves. Seriously, it's worth it.)

The All-Stars 4 cast list was released a few weeks back, but for those who'd like a memory jog, the new season will see a resurgence of stage performing talents from the likes of: Latrice Royale, Naomi Smalls, Farrah Moan, Valentina, Jasmine Masters, Monique Heart, Monét X Change, Trinity Taylor, Manila Luzon, and Gia Gunn. At the time, RuPaul (who hosts and executive produces the show) reportedly teased major fierceness on the horizon for All-Stars 4, via a statement from VH1. His statement read,

"The fourth season of RuPaul's Drag Race All Stars is going to blow. your. mother. tucking. mind. Satisfaction guaranteed or your henny back."

Well, after watching the upcoming All-Stars crew strut their stuff to an expertly tailored holiday carol while brandishing their own individual ice picks, it seems most fans won't need much more convincing as to the whole "satisfaction guaranteed" thing. Audiences itching to learn more about this newfangled band of returning performers should look out for an extended sneak peek from All-Stars 4, which will air on VH1 in conjunction with RuPaul's holiday special on Friday, Dec. 7.

Talk about the gift that keeps on giving. Who else is ready to ring in this holiday season with the All-Stars queens?