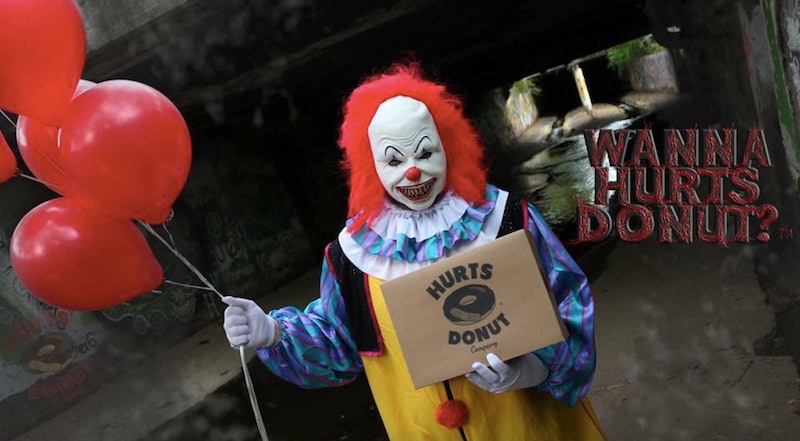 I don’t really know that I’ve ever had a serious frenemy situation going on in my life, but I won’t lie: There have been occasions on which I absolutely would have sent someone doughnuts delivered by a scary clown if it had been an option to me at the time. Alas, scary clown doughnut delivery has never been a service to which I have had access — but if you live near a Hurts Donuts location right now, guess what? You do: Hurts’ scary clown doughnut delivery service is making the rounds for the month of October, enabling you to scare the pants off of any doughnut lover within their delivery radius. IT’S A HALLOWEEN MIRACLE!...

...Or nightmare. You pick which.

Hurts Donuts opened its first shop in Springfield, Mo. in 2013, and in the five years since then, it has grown by leaps and bounds. Now with 19 shops spread across 10 states (Missouri, Colorado, Oklahoma, Texas, Arkansas, Arizona, Iowa, Wisconsin, Nebraska, and Kansas), and six more shops on the way (including one in New Orleans and one in Memphis), the local chain has become famous for their offbeat and elaborate offerings. Remember those pickle doughnuts? Those came from Hurts. If pickles aren’t your jam, though, they also make doughnuts covered in things like Fruity Pebbles or Andes mints. Also, their normal vehicle for delivery orders — in Springfield, at least — is an old ambulance they refer to as a Wham-bulance. Just sayin’.

Anyhoo, knowing a) the kind of doughnuts Hurts makes, and b) how they typically deliver them, it’s perhaps unsurprising that they’d come up with something equally weird and unexpected for Halloween — and that’s where the scary clown doughnut delivery service comes in. It’s exactly what you think it is: For a small fee ($5, according to Food and Wine), plus the cost of a box of doughnuts, Hurts will send a terrifying demon-clown-monster-thing to your victim of choice to deliver said doughnuts right into their horrified little hands.

That is objectively hilarious.

Hurts unfortunately doesn’t have one main Facebook page that serves the whole chain; each individual location has its own page maintained by the shop in the question. Now, the reason I say “unfortunately” is that, because there’s no centralized Facebook page, there isn’t one place you can click through to in order to see the entire schedule of where the clown deliveries will be happening and when. To find out whether you’re one of the lucky cities, you have to go to the Locations page on Hurt’s website, find the specific location nearest to you, click over to that location’s Facebook page, and then scroll through the posts until you find one about the scary clown delivery service.

I know. It’s a lot of work. But to be fair… well, I would argue that going through all of it so you can send someone doughnuts delivered by a scary clown is absolutely, definitely worth it.

Maybe that’s just me, though.

In any event, the good news is that once you’ve done all that, the process of actually ordering a scary clown doughnut delivery is pretty easy. The posts all contain relevant information and a phone number to call in order to get yourself on the list. Note: These phone numbers appear to be specific to each location — so, uh, don’t call the number on the Springfield, Mo. Facebook page if you’re trying to get doughnuts delivered in Tempe, Ariz. Call the Tempe number. Otherwise, you'll be sad.

It’s also worth noting that scary clown delivery might be either limited or unavailable in some locations. Since Hurts is based in Springfield, the service is running in that city Monday through Friday for the entire month of October; however, a few other surrounding cities, like Bolivar, Mo., have only a single date listed next to them. (Bolivar’s is on Oct. 3, for the curious.) That doesn’t necessarily mean that those are the only dates those cities will play host to the scary doughnut clown — more could always get added — but, y’know, just bear in mind that the service is limited. For what it’s worth, there’s also no mention of scary clown doughnut delivery on the Facebook pages of some locations — Lincoln, Neb., for example — so do with that what you will.

On a more serious note, please do not arrange a scary clown doughnut delivery to someone you know has a severe phobia of or is otherwise triggered by clowns. It is not funny or nice to cause actual trauma to someone.

If you know your pals can handle it, though — and, ideally, that they will find it as funny as you do if it happens to them — then go ahead and ring up your friendly neighborhood scary clown doughnut delivery line. You can find your nearest Hurts Donuts location here.