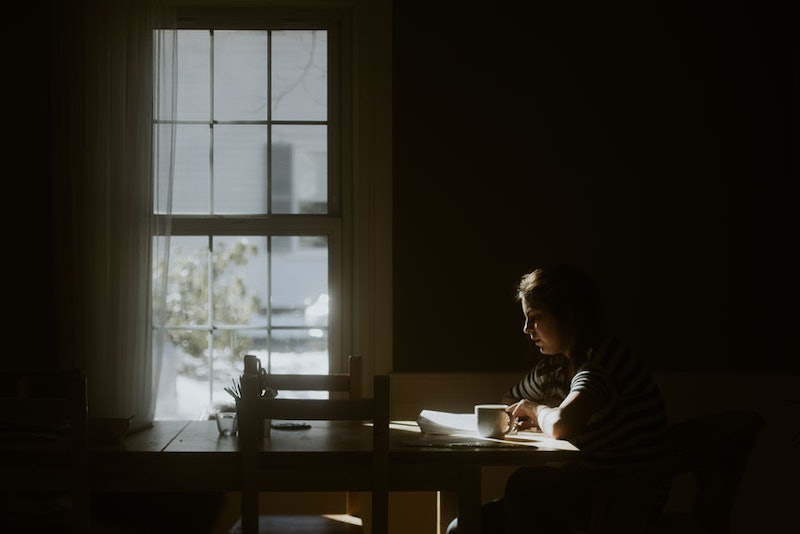 I was never one for scary stories growing up. I was, quite simply, too scared. I was a chicken, through and through. I didn't like Goosebumps. I didn't like horror movies. I read Scary Stories to Tell in the Dark and Coraline, but only in broad daylight (I still spent all night cowering under my covers, certain that my bedspread was all that separated me from an army of slavering liches).

I started to come around as an older teen, when I was introduced to Shirley Jackson and Stephen King. I even started to enjoy a creepy ambiance in my literature, as long as I knew that it wasn't for real. But then, freshman year of college, I was handed a short story that made me want to dive straight under my covers all over again:

Where Are You Going, Where Have You Been? by Joyce Carol Oates.

If you haven't read it before (and you should), the story follows a pretty, 15-year-old girl named Connie. She knows that she's pretty. She likes going out with her friends, and rolling her eyes at her mother. And one day, two boys pull up in a car, and ask her to get in. She does. The car drives away.

That's it. That's the whole plot.

And it's terrifying, not least because it's based on an actual serial killer.

Where Are You Going, Where Have You Been? is a master class in building suspense — even before the gold-painted jalopy pulls up in Connie's driveway, we have a sense that something is... off. Connie doesn't know the boys in the car. She saw one of them while out on the town, a boy with wild, wig-like hair, but they didn't speak. He's the one doing the talking now. There's no one else around for miles. Her family is gone for the afternoon. And at first she's nervous in a flattered, teenaged way, trying to impress a cute boy who wants to take her for a ride.

But the more she stands out there talking to him, the more Connie starts to realize that something is wrong:

"Connie blushed a little, because the glasses made it impossible for her to see just what this boy was looking at. She couldn't decide if she liked him or if he was just a jerk, and so she dawdled in the doorway and wouldn't come down or go back inside. She said, 'What's all that stuff painted on your car?'

'Can'tcha read it?' He opened the door very carefully, as if he were afraid it might fall off. He slid out just as carefully, planting his feet firmly on the ground, the tiny metallic world in his glasses slowing down like gelatine hardening, and in the midst of it Connie's bright green blouse. 'This here is my name, to begin with,' he said. ARNOLD FRIEND was written in tarlike black letters on the side, with a drawing of a round, grinning face that reminded Connie of a pumpkin, except it wore sunglasses. 'I wanta introduce myself, I'm Arnold Friend and that's my real name and I'm gonna be your friend, honey, and inside the car's Ellie Oscar, he's kinda shy."'Ellie brought his transistor radio up to his shoulder and balanced it there. 'Now, these numbers are a secret code, honey,' Arnold Friend explained. He read off the numbers 33, 19, 17 and raised his eyebrows at her to see what she thought of that, but she didn't think much of it."

At long last she goes with him, blankly, as though he's put her under some kind of spell. And that's it.

She put out her hand against the screen. She watched herself push the door slowly open as if she were back safe somewhere in the other doorway, watching this body and this head of long hair moving out into the sunlight where Arnold Friend waited.

"My sweet little blue-eyed girl," he said in a half-sung sigh that had nothing to do with her brown eyes but was taken up just the same by the vast sunlit reaches of the land behind him and on all sides of him—so much land that Connie had never seen before and did not recognize except to know that she was going to it.

For years, readers have theorized that Arnold Friend is the devil, or they've tried to puzzle out the necrotic meaning of the numbers in his "secret code." And honestly, I prefer the devil explanation, because the actual story that inspired Joyce Carol Oates is entirely horrific:

In 1964, an adult man named Charles Schmid liked to creep on high school girls in Tuscon, Arizona. He was only 5'3", but wore cowboy boots stuffed with crushed cans and rags to make himself taller. He also wore makeup to make himself look younger or just... creepier: white lipstick, dark tan foundation, dyed black hair, artificially stretched lips, and a fake mole on his cheek. He was popular with the ladies, though, and he frequently lied his way into dating teenagers. He's often called the "Pied Piper of Tucson."

And then he decided to kill a girl.

He picked Alleen Rowe, a 15-year-old high school student. With the aid of his 17-year-old "girlfriend," Mary French, and his friend, John Saunders, Schmid lured Alleen out of her mother's house in the dead of night, promising to take her to a party. Instead, the trio took her into the desert to assault and murder her. Her skull was cracked with a rock.

Schmid did the same to 16-year-old Gretchen Fritz the following year, along with her 13-year-old sister Wendy. But this time, he bragged about the murders to Richie Bruns, another one of his creepy friends. Bruns was apparently OK with Schmid's crimes at first, and helped him bury the bodies. But then Bruns developed a crush on a young woman of Tucson, and started to fear that she was next on Schmid's list. At long last, someone turned Schmid in, and the Pied Piper and his accomplishes were all rounded up and put away.

The facts of the case are horrifying enough as it is. But Where Are You Going, Where Have You Been? manages to capture the horror without showing us the crime itself. It distills one man's gruesome hate for young girls into one supremely unsettling work of prose. And it is a masterfully creepy short story, whether you are a fan of true crime or not.

So go read it. But be sure to keep the lights on.