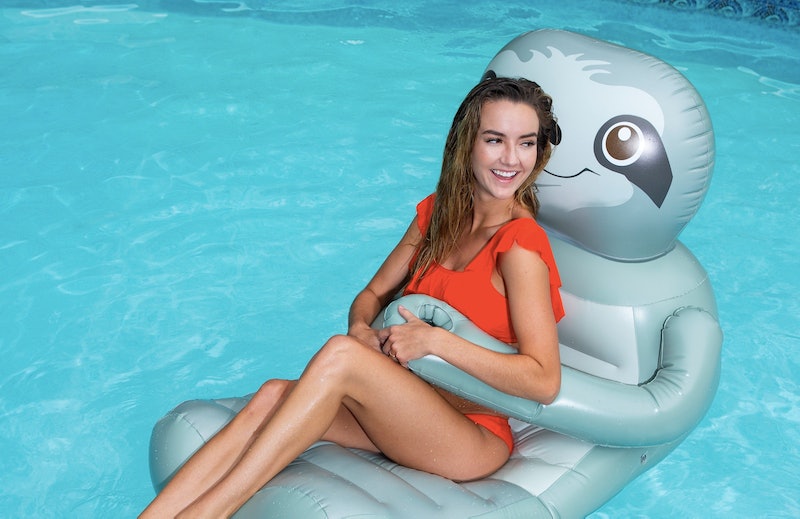 Unicorns have been the creature at the forefront of everyone's mind for the past few years. Frankly, it has been difficult to visit any boutique without finding a shirt or a journal or an accessory with the mystical beast depicted front and center. But, as was originally predicted by some incredibly astute trend forecasters at Etsy, the unicorn is being dethroned by a creature far less magical, but equally enchanting: sloths. Now, in advance of the summer season, you can get your hands on an absolutely adorable version of the ultimate pool accessory: a Sloth-Shaped Pool Float.

Per a press release sent to Bustle, the Swimways Huggables Sloth Pool Float is "the only pool floats that will literally 'hug' you.” But wait, how does a pool float hug you? A good question. The floats are constructed in a way that transforms your typical sloth into a chaise lounge-like shape. The head of the sloth is where you will rest your head, and the body makes up the rest of the float where your body will go. The creature's arms wrap around you, giving the appearance of a hug from the inflatable creature. The hand at the end of the arm is also a cup holder, so you can stay hugged AND hydrated with the float.

The Huggable line of pool floats also includes a panda bear and a teddy bear, both of which offer similar perks, like the cupholder and comparable huggability, naturally. But, if your goal is to be a trendsetter next season, you're going to want to opt for the Xenarthra.

In December 2018, Etsy published a trend forecast for 2019 on its blog. Per that forecast, in addition to loud patterns, pressed flowers, and a burnt orange hue, SLOTHS are taking the throne as the "it" animal. In the forecast, Etsy Trend Expert Dayna Isom Johnson said, "Much like their own unhurried movements, sloths have slowly been on the rise for a few years now, but next year, they’re poised to pick up speed.” What is a better way to channel your inner sloth-like zen than using one's body as a vehicle for all your summertime pool lounging.

It's no secret the popularity of pool floats, too, has steadily been on the rise. Further, it is the anthropomorphic pool floats that have proven to be particularly popular. Back in 2015, Taylor Swift posted an Instagram pic of herself and then-boyfriend Calvin Harris atop a swan-shaped pool float. On the surface, the photo seemed like any old summer swim snapshot, but it paved the way for the pool float fad. Last summer, I got to dive head first into the truly expansive world of pool floats, and let me tell you: it is a wild, wild world of air and plastic. If you can dream it, there is probably a pool float designed for it.

An entire year has passed since the pool float takeover of 2018, and if the Huggable Sloth Pool Float is any indication, there is no sign of this trend dying any time soon. If a sloth can teach you anything, it is to try to chill out a little bit. What helps with chilling out more than vitamin sea?