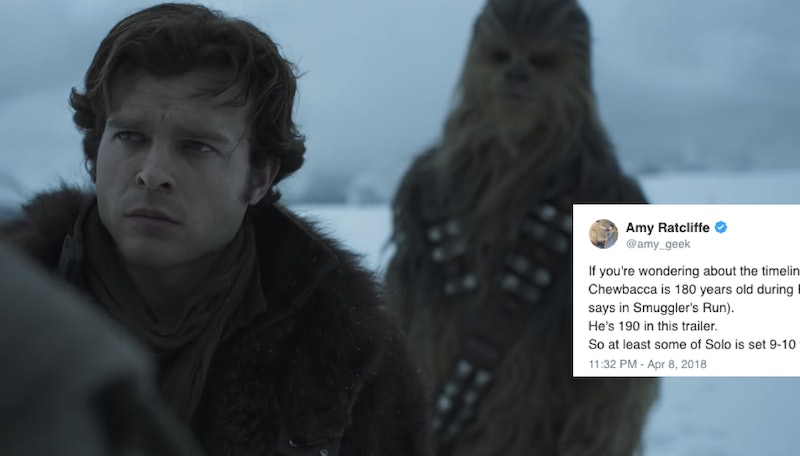 Any fans wondering where this latest Star Wars offering fits within the canon might finally have an answer — there's a Solo trailer clue that places the film within Star Wars' timeline. A sharp-eyed Twitter user noted a brief exchange between Han Solo and Chewbacca that seems to place the film firmly between Episodes III and IV — that would be 2005's Revenge of the Sith and 1977's A New Hope, in case you don't have your notecards ready. And other sources, like the website Polygon, have supported those findings.

Shortly after the trailer's release on Sunday night, Amy Ratcliffe of Nerdist alerted her 44,000 followers to the fact that since Chewbacca references his age in the Solo trailer, it can help place viewers in the universe. The moment in question comes near the end of the two-and-a-half-minute trailer, after other characters that were skimmed over in February's teaser trailer were given a bit more depth. Donald Glover's Lando Calrissian expanded his scene-stealing smirk into actual lines, Emilia Clarke's Qi'ra was given the opening narration, and Alden Ehrenreich's Han Solo and Joonas Suotamo's Chewbacca finally cleared up a lingering question.

During a moment of tension in what looks like the Millennium Falcon's cockpit, Chewie confidently flips a few switches, causing confusion for the ship's human captain. "Since when do you know how to fly," Solo asks the Wookiee, and after a garbled response, shoots back, "190 years old? You look great!" (Wookiees live to be about 400 years old, just FYI.) That's a crucial piece of information, because as Ratcliffe pointed out out on Twitter, fans already know Chewbacca's age at another point along the Star Wars timeline.

Ratliffe asserts that in the junior novel Smuggler's Run: A Han Solo & Chewbacca Adventure, Chewie refers back to his age during Revenge of the Sith, claiming to have been 180 years old during those events. So if he's 190 years old in Solo, that means it's around 10 years after Episode III. And since Polygon reported that there's a 19-year gap between Episodes III and IV, that slides Solo onto the timeline nine or 10 years before Episode IV, which also happens to be where Chewie made his first appearance, according to the fandom site Wookieepedia.

Exhausted yet? Well, keep your energy up, because there's more to discuss. If you're a fan of the film franchise alone, you might be wondering whether things that take place in novels really have a bearing on the film's timeline. The answer is yes, in this case, but it hasn't always been that way.

The issue of canon has been a complicated one, and one that would require its very own article to address in a satisfying way. But the short version of the story is divided into pre- and post-2012, when Disney purchased Lucasfilm. According to the website Geek.com, before the purchase, there more freedom and less oversight about where specific projects that weren't the six existing films fit into the timeline. You could kind of cram a radio show, a book, a game, or a comic anywhere it seemed like there might be room. The slate was then wiped clean in 2012, with all those spin-offs being relegated to "Legends" status and the expanded universe, with anything coming after being required to slot into its own specific location.

So, long story short, Smuggler's Run was published by Disney-Lucasfilm Press in 2015, and since it refers to actions that took place in Revenge of the Sith, fans can safely use both projects to triangulate Solo's position within the over-arcing Star Wars narrative. Or at least, to triangulate when a part of it takes place; since this is a technologically advanced future, after all, they can really jump through space and time to their heart's content, even within a single film. But for at least one scene of Solo, fans will know exactly where they are in the canon's accepted timeline. Phew.

It's a lot of details to dig through, but anything that makes the timeline a little clearer is worth the work, so keep those sneaky Easter eggs coming in the trailers. Amateur Star Wars historians are more than up to the task of spotting them.